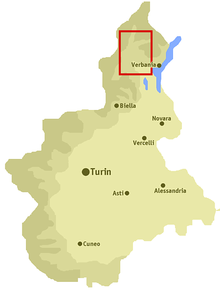 The Ossola (also Valle Ossola or Val d’Ossola) is an area of Italy situated to the north of Lago Maggiore. It lies within the Province of Verbano-Cusio-Ossola. Its principal river is the Toce, and its most important town Domodossola.

There are many etymological claims as to the origins of the name Ossola. The most likely is from the Celtic "hoch hill", which means "high lands". The German name for the valley is Eschental ("valley of the ash trees").

In 1944, with the Allied forces still stuck south of the Appennines and Mussolini's puppet state controlling all of Northern Italy, the Italian partisans staged an uprising behind German lines, led by the Committee of National Liberation of Upper Italy. This rebellion led to the establishment of a number of provisional partisan governments throughout Northern Italy, of which the Free Republic of Ossola was the most prominent.[2] It received official recognition from Switzerland and from Allied consulates in Switzerland. Within a few weeks, German reinforcements had crushed the uprising, and the area's liberation had to wait until the final offensives of 1945.