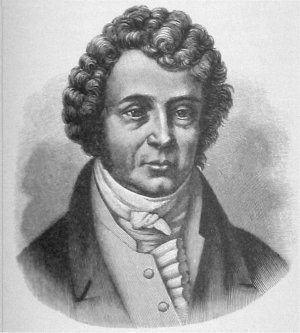 Ampère was born on 20 January 1775 [cite book | title = André-Marie Ampère |last = Hofmann | first = James R. |publisher = Cambridge University Press |year = 1996 |page = 8 ] in , and lived from 1775 to 1796 in the nearby burg of . His father began to teach him , until he discovered the boy's preference and aptitude for mathematical studies. The young Ampère, however, soon resumed his Latin lessons, to enable him to master the works of Euler and Bernoulli.

In later life he used to claim that he knew as much about mathematics and science when he was eighteen as ever he knew; but, a , his reading embraced nearly the whole round of knowledge&mdash;history, travels, poetry, philosophy and the natural sciences.

During the revolution his father stayed at Lyons expecting to be safer in the city. Nevertheless, after the revolutionaries had taken the city he fell a victim and was executed. This death was a great shock to Ampère.

In 1796 he met Julie Carron, the daughter of a blacksmith living near Lyon, and in 1799 they were married. From about 1796 Ampère gave private lessons at Lyon in , and languages; and in 1801 he removed to Bourg, as professor of and chemistry, leaving his ailing wife and infant son () at Lyon. Her death, in July 1803, troubled Ampère for the rest of his life. Also in 1804, Ampère was appointed professor of mathematics at the "" of Lyon.

Ampère used to say that "at eighteen years he found three culminating points in his life, his , the reading of Thomas's "Eulogy of Descartes", and the ... On the day of his wife's death he wrote two verses from the s, and the prayer, 'O Lord, God of Mercy, unite me in Heaven with those whom you have permitted me to love on earth.' Serious doubts harassed him at times, and made him very unhappy. Then he would take refuge in the reading of the and the Fathers of the Church." [cite web | last = | first = | authorlink = | coauthors = | title = Catholic Encyclopedia | work = | publisher = | date = | url = http://www.newadvent.org/cathen/01437c.htm| format = | doi = | accessdate = 2007-12-29 ]

Contributions to physics and further studies

's recommendation obtained for him the Lyon appointment, and afterwards (1805) a minor position in the polytechnic school at Paris, where he was appointed professor of mathematics in 1809. Here he continued to pursue his scientific research and his diverse studies with unabated diligence. He was admitted as a member of the Institute in 1814.

Ampère's fame mainly rests on the fact that he rendered to science in establishing the relations between electricity and magnetism, and in developing the science of electromagnetism, or, as he called it, electrodynamics. On 11 September 1820 he heard of H. C. Ørsted's discovery that a magnetic needle is acted on by a voltaic current. Only a week later, on 18 September, he presented a paper to the Academy containing a far more complete exposition of that and kindred phenomena.On the same day Ampère also demonstrated before the Academy that parallel wires carrying currents attract or repel each other (depending on whether currents are in the same or in opposite directions). This laid the foundation of the science of .

The field of electromagnetism thus opened up, he explored with characteristic industry and care, and developed a mathematical theory which not only explained the electromagnetic phenomena already observed, but also predicted many new ones.

Ampère died at and is buried in the , Paris. The great amiability and childlike simplicity of his character are well brought out in his "Journal et correspondence" (Paris, 1872).

* [http://www.ampere.cnrs.fr Ampère and the history of electricity] - a French-language, edited by CNRS, site with Ampère's correspondence (full text and critical edition with links to manuscripts pictures, more than 1000 letters), an Ampère bibliography, experiments, and 3D simulations
* [http://musee-ampere.univ-lyon1.fr Ampère Museum] - a French-language site from the museum in Poleymieux-au-Mont-d'or, near ,
*
*
* [http://www.newadvent.org/cathen/01437c.htm Catholic Encyclopedia on André Marie Ampère]