Chess notation is the term for several systems that have developed to record either the moves made during a game of chess or the position of the pieces on a chess board. The earliest systems of notation used lengthy narratives to describe each move; these gradually evolved into terser systems of notation. Currently algebraic chess notation is the accepted standard, and is widely used. Algebraic notation has a few variations. Descriptive chess notation was used in English and Spanish-language literature until the late 20th century, but is now obsolete. There are some special systems for international correspondence chess. PGN is used when working with computer chess programs. Systems also exist for transmission using Morse code over telegraph or radio.

Some move-recording notations are designed mainly for use by human players and others for use by computers. 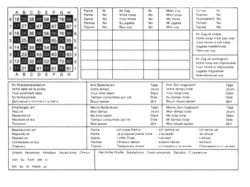 In recognized competitions all players are required to record all the moves of both players in order to: resolve disputes about what the position should now be, whether a player has made an illegal move, etc.; keep an accurate count of the moves if, as in most serious competition, there is a time limit rule which requires each player to complete a specified number of moves in a specified time.[1] All chess coaches strongly recommend the recording of one's games so that one can look for improvements in one's play.[2] The algebraic and descriptive notations are also used in books about chess.

Here is an example of the same moves in some of the notations which may be used by humans:[9]

Annotators commenting on a game frequently use question marks and exclamation marks to label a move as bad or praise the move as a good one (see punctuation (chess)).[10]

The following are commonly used for chess-related computer systems (in addition to Coordinate and Smith notation, which are described above):

Notation for telegraph and radio

Some special methods of notation were used for transmitting moves by telegraph or radio, usually using Morse Code. The Uedemann Code and Gringmuth Notation worked by using a two-letter label for each square and transmitting four letters - two letters for the origin square followed by two letters for the destination square. Castling is shown as a king move. Squares are designated from White's side of the board, files from left to right and ranks from nearest to farthest. The Rutherford Code first converted the move into a number and then converted the move number into a composite Latin word. It could also transmit moves of two games at the same time.

This code was devised by Louis Uedemann (1854–1912). The method was never actually used, mainly because a transposition of letters can result in a valid but incorrect move. Many sources incorrectly use this name for the Gringmuth Code.

This code was invented in 1880 by Sir William Watson Rutherford (1853–1927). At the time, the British Post Office did not allow digits or ciphers in telegrams, but they did allow Latin words. This method also allowed moves for two games to be transmitted at the same time. In this method, the legal moves in the position were counted using a system until the move being made was reached. This was done for both games. The move number of the first game was multiplied by 60 and added to the move number of the second game. Leading zeros were added as necessary to give a four-digit number. The first two digits would be 00 through 39, which corresponded to a table of 40 Latin roots. The third digit corresponded to a list of 10 Latin prefixes and the last digit corresponded to a list of 10 Latin suffixes. The resulting word was transmitted.

After rules were changed so that ciphers were allowed in telegrams, this system was replaced by the Gringmuth Notation.[13]

Recording the positions of pieces

Positions are usually shown as diagrams (images), using the symbols shown here for the pieces.

There is also a notation for recording positions in text format, called the Forsyth–Edwards Notation (FEN). This is useful for adjourning a game to resume later or for conveying chess problem positions without a diagram. A position can also be recorded by listing the pieces and the square upon which they reside, e.g. White: Ke1, Rd3, etc.

There are also systems for classifying types of endgames. See Chess endgame#Endgame classification for more details. 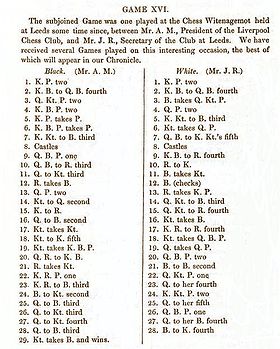 The notation for chess moves evolved slowly, as these examples show. The last is in algebraic chess notation, the others show the evolution of descriptive chess notation and use spelling and notation of the period.

A text from Shakespeare's time uses complete sentences to describe moves, for example, "Then the black king for his second draught brings forth his queene, and placest her in the third house, in front of his bishop's pawne" - which we would now write as 2 ... Qf6. The great 18th-century player Philidor used an almost equally verbose approach in his influential book "Analyse du jeu des Échecs", for example, "The king's bishop, at his queen bishop's fourth square."[15]

Rather surprisingly, algebraic chess notation was used by Philipp Stamma (c. 1705-1755) in an almost fully developed form before the now obsolete descriptive chess notation evolved. The main difference between Stamma's system and the modern system is that Stamma used "p" for pawn moves and the original file of the piece ("a" through "h") instead of the initial letter of the piece.[16] But Philidor defeated Stamma in a match, so his writings had more influence and the descriptive system based on his approach was dominant for a long time. Algebraic notation became dominant in the 20th century, although it did not become popular in the English-speaking countries until the 1970s.[17]