The Persian carpet (Pahlavi bōb[1] Persian farš فرش, meaning "to spread" and qāli)[2] is an essential part of Persian art and culture. Carpet-weaving is undoubtedly one of the most distinguished manifestations of Persian culture and art, and dates back to ancient Persia. In 2008, Iran’s exports of hand-woven carpets was $420 million or 30% of the world's market.[3][4] There is an estimated population of 1.2 million weavers in Iran producing carpets for domestic markets and international export.[5] Iran exports carpets to more than 100 countries, as hand-woven rugs are one of its main non-oil export items. The country produces about five million square meters of carpets annually—80 percent of which are sold in international markets.[6] In recent times Iranian carpets have come under fierce competition from other countries producing reproductions of the original Iranian designs as well as cheaper substitutes.[6]

The designs of Iranian carpets are copied by weavers from other countries as well. Iran is also the world's largest producer and exporter of handmade carpets, producing three quarters of the world's total output.[7][8][9] Though in recent times, this ancient tradition has come under stiff competition from machine-made products.[10] Iran is also the maker of the largest handmade carpet in history, measuring 60,546 square feet (5,624.9 square meter).[11][12][13]

Persian carpets can be divided into three groups; Farsh / 'Qālii' (sized anything greater than 6×4 feet), Qālicheh (meaning rug, sized 6×4 feet and smaller), and nomadic carpets known as Gelim (گلیم), (including Zilu, meaning rough carpet).[2] In this use, Gelim includes both pile rugs and flat weaves (such as kilim and soumak).

The art of carpet weaving existed in Iran in ancient times, according to evidence such as the 2500-year-old Pazyryk carpet, dating back to 500 B.C., during the Achaemenid period.

The first documented evidence on the existence of Persian carpets came from Chinese texts dating back to the Sassanid period (224 – 641 AD).

This art underwent many changes in various eras of the Iranian history to an extent that it passed an upward trend before the Islamic era until the Mongol invasion of Persia. After the invasion, the art began to grow again during the Timurid and Ilkhanid dynasties.[1]

With the passage of time, the materials used in carpets, including wool, silk and cotton, will decay. Therefore archaeologists are rarely able to make any particularly useful discoveries during archaeological excavations. What has remained from early times as evidence of carpet-weaving is nothing more than a few pieces of worn-out carpets. Such fragments do not help very much in recognizing the carpet-weaving characteristics of pre-Seljuk period (13th and 14th centuries AD) in Persia. 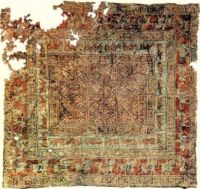 The Pazyryk Carpet, the oldest known surviving carpet in the world, 5th century BC.

In a unique archaeological excavation in 1949, the exceptional Pazyryk carpet was discovered among the ices of Pazyryk Valley, in Altai Mountains in Siberia. The carpet was found in the grave of a Scythian prince. Radiocarbon testing indicated that the Pazyryk carpet was woven in the 5th century BC.[14] This carpet is 283 by 200 cm (approximately 9.3 by 6.5 ft) and has 36 symmetrical knots per cm² (232 per inch²).[15] The advanced weaving technique used in the Pazyryk carpet indicates a long history of evolution and experience in this art. Pazyryk carpet is considered as the oldest carpet in the world.[16] Its central field is a deep red color and it has two wide borders, one depicting deer and the other Persian horsemen.

However, it is believed that the carpet from Pazyryk is not likely a nomadic product, but a product of the Achaemenid period.[17]

By the sixth century, Persian carpets of wool or silk were renowned in court circles throughout the region. The Bahârestân (spring) carpet of Khosrow I was made for the main audience hall of the Sassanid imperial Palace at Ctesiphon in the Sassanid province of Khvârvarân (in present-day Iraq). It was 450 feet (140 m) long and 90 feet (27 m) wide and depicted a formal garden. With the occupation of the Sassanid capital, Tuspawn, in the 7th century CE, the Baharestan carpet was taken by the Arabs, cut into small fragments and divided among the victorious soldiers as booty.[19]

From the yarn fiber to the colors, every part of the Persian carpet is traditionally hand-made from natural ingredients over the course of many months. This arduous process is shown in the Japanese/Iranian film The Wind Carpet.

In the 8th century A.D. Azarbaijan Province was among the largest centers of carpet and rough carpet (ziloo) weaving in Iran. The Province of Tabarestan, besides paying taxes, sent 600 carpets to the courts of caliphs in Baghdad every year. At that time, the main items exported from that region were carpets, and small carpets for saying prayers (also known as prayer mats). Furthermore, the carpets of Khorassan, Sistan and Bukhara, because of their prominent designs and motifs, were in high demand among purchasers.[1]

During the reigns of the Seljuq and Ilkhanate dynasties, carpet weaving was still a booming business, so much so that a mosque built by Ghazan Khan in Tabriz, in northwestern Iran, was covered with superb Persian carpets. Sheep were specially bred to produce fine wool for weaving carpets. Carpet designs depicted by miniature paintings belonging to the Timurid era lend proof to the development of this industry at that time. There is also another miniature painting of that time available which depicts the process of carpet weaving.

During that era dyeing centers were set up next to carpet weaving looms. The industry began to thrive until the attack on Iran by the Mongol army.[1]

The earliest surviving of the Persian carpets from this period is of a Safavid (1501–1736) carpet known as the Ardabil Carpet, currently in V&A Museum in London.[21] This most famous of Persian carpets has been the subject of endless copies ranging in size from small carpets to full scale carpets. There is an 'Ardabil' at 10 Downing Street and even Hitler had an 'Ardabil' in his office in Berlin.[22][23]

There is much variety among classical Persian carpets of the 16th and 17th century. There are numerous sub-regions that contribute distinctive designs to Persian carpets of this period such as Tabriz and Lavar Kerman. Common motifs include scrolling vine networks, arabesques, palmettes, cloud bands, medallions, and overlapping geometric compartments rather than animals and humans. Figural designs are particularly popular in the Iranian market and are not nearly as common in carpets exported to the west.

Although carpet production is now mostly mechanized, traditional hand woven carpets are still widely found all around the world, and usually have higher prices than their machine woven counterparts due to them being an artistic presentation. Iran exported $517 million worth of hand woven carpets in 2002. Iran's carpet exports amounted to US$635 million in 2005, according to the figures from the state-owned Iran Carpet Company. Most are top-notch hand-woven products. In October 2007, National Iranian Carpet Center revealed that hand-woven carpets have ranked first in country's non-oil exports and hold the third position among overall exports. Nearly five million workers are engaged in the Iranian carpet industry, making it one of the biggest enterprises in the country.

In recent times Iranian carpets have come under fierce competition from other countries producing fakes of the original Iranian designs as well as genuine cheaper substitutes. Most of the problems facing this traditional art is due to absence of patenting and branding the products as well as reduced quality of raw materials in the local market and the consistent loss of original design patterns. The absence of modern R&D is causing rapid decline in the size as well as market value of this art.[25]

To give one example, the "Carpet of Wonder" in the Sultan Qaboos Grand Mosque in Muscat in the Sultanate of Oman measures 4,343 square meters. Its construction required four years of labor by 600 workers, resulting in 12 million man hours of work.[26]

Wool is the most common material for carpets but cotton is frequently used for the foundation of city and workshop carpets. There are a wide variety in types of wool used for weaving. Those of which include Kork wool, Manchester wool, and in some cases even camel hair wool. Silk carpets date back to at least the sixteenth century in Sabzevar and the seventeenth century in Kashan and Yazd.[citation needed] Silk carpets are less common than wool carpets since silk is more expensive and less durable; they tend to increase in value with age. Due to their rarity, value and lack of durability, silk carpets are often displayed on the wall like tapestries rather than being used as floor coverings. 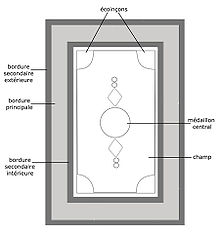 Elements of the Persian carpet.

Persian rugs are made up of a layout and a design which in general included one or a number of motifs. The Iran Carpet Company, a specialist in the subject, has attempted to classify Persian carpet designs and has carried out studies of thousands of rugs.[citation needed] Their results show that there have been slight alterations and improvements to almost all original designs. In its classification the company has called the original designs as the 'main pattern' and the derivatives as the 'sub patterns'. They have identified 19 groups, including: historic monuments and Islamic buildings, Shah Abbassi patterns, spiral patterns, all-over patterns, derivative patterns, interconnected patterns, paisley patterns, tree patterns, Turkoman patterns, hunting ground patterns, panel patterns, European flower patterns, vase patterns, intertwined fish patterns, Mehrab patterns, striped patterns, geometric patterns, tribal patterns, and composites.

Design can be described in terms of the manner in which it organizes the field of the rug. One basic design may serve the entire field, or the surface may be covered by a pattern of repeating figures. In areas using long-established local designs, the weaver often works from memory, with the patterns passed on within the family. This is usually sufficient for simple rectilinear design. For the more elaborate curvilinear designs, the patterns are carefully drawn to scale in the proper colours on graph paper. Each square thus becomes a knot, which allows for an accurate rendition of even the most complex design. Designs have changed little through centuries of weaving. Today computers are used in the production of scale drawings for the weavers.[27]

Persian rugs are typically designed using one of four patterns: all-over, central medallion, compartment and one-sided. Some abstract asymmetrical design can be found but most of these can be described as one-sided or unidirectional.[citation needed]

There are a number of patterns which are found in Persian and Oriental rugs called 'motifs', these designs have different meanings and tend to be used depending on the area the rug was woven although it is not unusual to find more than one motif in a single rug.

Some of the more common motifs are: