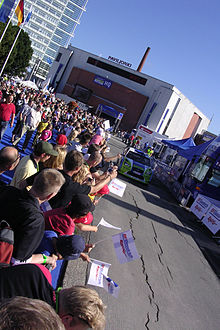 Richard Burns with a Subaru Impreza WRC at the 2001 event. 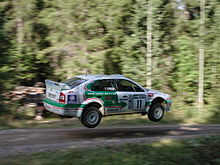 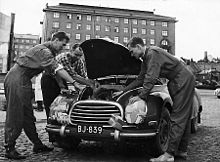 Osmo Kalpala servicing his Donau (DKW) during the 1956 rally.

The Neste Oil Rally Finland (formerly known as 1000 Lakes Rally) is a rally event driven in the Jyväskylä area in Central Finland. It is the biggest annually organised public event in the Nordic countries, gathering over 500,000 spectators every year.

Rally Finland is known as the "Gravel Grand Prix", since it is the highest-speed rally in the championship.[1] The most famous special stage is Ouninpohja, with its spectacular high speed jumps.[2] The rally has also been known for being very difficult for non-Nordic drivers. Only four drivers outside Finland and Sweden have won the rally. The WRC teams voted Neste Rally Finland "Rally of the Year" in 1998, 2002, 2003 and 2004.

The rally has been held since 1951, first as a national competition, then from 1959 on as a European Rally Championship event and since the introduction of the World Rally Championship in 1973, as Finland's WRC event. The rally is known colloquially in Finland as Jyväskylän Suurajot (the "Jyväskylä Great Race"). The international name "Rally of the Thousand Lakes" was introduced in 1954. The rally was renamed in 1994 when Neste Oil became the main sponsor.

Ouninpohja is one of the most famous stages in the WRC, well-known for its high speed, sweeping corners, blind crests and big jumps. At one famous jump located 6 kilometers (3.7 mi) from the start line, close to a landmark yellow house, spectators measure the length of the jumps and mark the distance by the roadside. In 2003, Markko Märtin set the record for the longest jump, travelling 57 meters (187 ft) in the air at a speed of 171 kilometres per hour (106 mph).[3] In 2005, Gigi Galli did even better with 58 metres, jumping flat-out with a Mitsubishi Lancer WRC.[4]

The Ouninpohja stage was split in two parts for the 2005 and 2006 events, since Petter Solberg exceeded the FIA's maximum average speed (130 km/h) there in 2004. The rule was changed for 2007 so Ouninpohja returned as a 33 km (21 mi) version, although there were three chicanes added. However, in 2008 event only part of the stage was used in Kakaristo stage. In 2009 the stage is completely out of the route. Jarmo Mahonen, managing director of the rally organiser AKK, stated that "the matter was discussed with the FIA already last year, and at the time we were able to keep Ouninpohja as a part of our route. This year we have to leave it out for safety reasons."[5]