The silkworm is the larva or caterpillar of the domesticated silkmoth, Bombyx mori (Latin: "silkworm of the mulberry tree"). It is an economically important insect, being a primary producer of silk. A silkworm's preferred food is white mulberry leaves, but it may also eat the leaves of any other mulberry tree (i.e., Morus rubra or Morus nigra) as well as the Osage Orange. It is entirely dependent on humans for its reproduction and does not occur naturally in the wild. Sericulture, the practice of breeding silkworms for the production of raw silk, has been underway for at least 5,000 years in China,[1] from where it spread to Korea and Japan, and later to India and the West.

The silkworm was domesticated from the wild silkmoth Bombyx mandarina which has a range from northern India to northern China, Korea, Japan and far the eastern regions of Russia. The domesticated silkworm derives from Chinese rather than Japanese or Korean stock.[2][3] It is unlikely that silkworms were domestically bred before the Neolithic age: it was not until then that the tools required to facilitate the manufacturing of larger quantities of silk thread had been developed. The domesticated B. mori and the wild B. mandarina can still breed and sometimes produce hybrids.[4]:342

The moth – the adult phase of the life cycle – cannot fly. Silkmoths have a wingspan of 3–5 cm (1.5–2 inches) and a white hairy body. Females are about two to three times bulkier than males (for they are carrying many eggs), but are similarly colored. Adult Bombycidaes have reduced mouth parts and do not feed, though a human caretaker can also[clarification needed] feed them.

Eggs take about fourteen days to hatch into larvae, which eat continuously. They have a preference for white mulberry, having an attraction to the mulberry oderant cis-jasmone. They are not monophagous since they can eat other species of Morus as well as some other Moraceae. Their droppings are black. Hatchlings and second-instar larvae are called kego and chawki in India. They are covered with tiny black hairs. When the color of their heads turns darker, it indicates that they are about to molt. After molting, the instar phase of the silkworm emerges white, naked, and with little horns on the backs.

After they have molted four times (i.e., in the fifth instar phase), their bodies become slightly yellow and the skin become tighter. The larvae will then enter the pupa phase of their life cycle and enclose themselves in a cocoon made up of raw silk produced by the salivary glands. The cocoon provides a vital layer of protection during the vulnerable, almost motionless pupal state. Many other Lepidoptera produce cocoons, but only a few—the Bombycidae, in particular the Bombyx genus, and the Saturniidae, in particular the Antheraea genus—have been exploited for fabric production.

If the animal is allowed to survive after spinning its cocoon and through the pupa phase of its life cycle, it will release proteolytic enzymes to make a hole in the cocoon so that it can emerge as a moth. These enzymes are destructive to the silk and can cause the silk fibers to break down from over a mile in length to segments of random length, which ruins the silk threads. To prevent this, silkworm cocoons are boiled. The heat kills the silkworms and the water makes the cocoons easier to unravel. Often, the silkworm itself is eaten (see Cuisine). 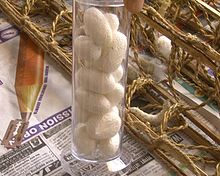 The cocoon is made of a thread of raw silk from 300 to about 900 meters (1,000 to 3,000 feet) long. The fibers are very fine and lustrous, about 10 micrometers (1/2,500th of an inch) in diameter. About 2,000 to 3,000 cocoons are required to make a pound of silk. At least 70 million pounds of raw silk are produced each year, requiring nearly 10 billion pounds of mulberry leaves.Matze1004 (talk) 20:19, 16 November 2011 (UTC)The FAO estimates the world production of raw silk at 164971 tonnes in 2009 <http://faostat.fao.org/site/603/DesktopDefault.aspx?PageID=603#ancor>.Matze1004 (talk) 20:19, 16 November 2011 (UTC) According to E. L. Palmer, one pound of silk represents about 1,000 miles of filament. The annual world production represents 70 billion miles of silk filament. This silk is usually processed to remove natural waxes or gums such as the sericin, a water-soluble protective layer that solidifies immediately when exposed to air. It is sometimes subsequently dyed.

Due to its miniature size and ease of culture, the silkworm has become a model organism in the study of Lepidopteran and arthropod biology. Fundamental findings on pheromones, hormones, brain structures and physiology have been made with the silkworm.[citation needed] One example of this was the molecular identification of the first known pheromone, bombykol which required extracts from 500,000 individuals, due to the very small quantities of pheromone produced by any individual worm.[citation needed]

Currently, research is focusing on genetics of silkworms and the possibility of genetic engineering. Many hundreds of strains are maintained, and over 400 Mendelian mutations have been described.[citation needed] Another source suggests 1000 inbred domesticated strains are kept worldwide.[5] One useful development for the silk industry are silkworms that can feed on food other than mulberry leaves, including an artificial diet.[citation needed] Research on the genome also raises the possibility of genetically engineering silkworms to produce proteins, including pharmacological drugs, in the place of silk proteins.

The company Kraig Biocraft Laboratories[6] has used research from the Universities of Wyoming and Notre Dame in a collaborative effort to create a silkworm that is genetically altered to produce spider silk. In September 2010 it was announced at a press conference at the University of Notre Dame that the effort had been successful.[7]

In January 2010, National University of Singapore together with Republic Polytechnic were in the process of creating "super" silk. [8] The "super" silk are produced by coaxing "silkworms to spin stronger silk by exposing them (silkworms) to an electric field before they (silkworms) spin" . [9] Silk produced through this new method is so strong as to be bullet-proof.

The domesticated variety, compared to the wild form, has increased cocoon size, growth rate and efficiency of its digestion. It has also gained tolerance to human presence and handling and living in crowded conditions. It also cannot fly and lacks fear of potential predators. These changes have made it entirely dependent upon humans for survival.[10] 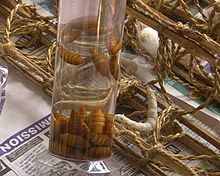 The silkworm is one of the world's most genetically modified animals. Silkworms were first domesticated during the Han Dynasty in China about 2000 years ago. Since then, the silk production capacity of the species has increased nearly tenfold. Silkworm is one of the few organisms wherein the principles of genetics and breeding were applied to harvest maximum output. It is next only to maize in exploiting the principles of 'heterosis' and 'cross breeding'. Silkworm breeding is aimed at the overall improvement of silkworm from a commercial point of view. The major objectives of silkworm breeding are improving fecundity, healthiness of larvae, quantity of cocoon and silk production, disease resistance, etc. Fecundity refers to the egg laying capacity of a breed. It is a very important factor, since commercial sericulture is strongly dependent on silkworm egg availability. Healthiness of larvae leads to a healthy cocoon crop. Healthiness is dependent on factors such as better pupation rate, less number of dead larvae in the mountage, shorter larval duration (the shorter the larval duration, the lesser the chances of infection) and bluish tinged fifth instar larvae (it is observed that bluish colored fifth instar larvae are healthier than the reddish brown ones). Quantity of cocoon and silk produced is directly related to the pupation rate and larval weight. Healthier larvae have greater pupation rates and cocoon weights. Quality of cocoon and silk depends on a number of factors including genetics. Specific purposes apart from commercial purpose are given attention by advanced countries to breed development for specific purposes like sericin production, sex limited breeds, thin/thick filament production etc. Disease resistance breeding is important, as the major reason for crop losses is pathogen infection. Efforts are being made to select breeds which are tolerant or resistant to various pathogens. [1]

Silkworm Raising For Entertainment and School Science Project: In the USA, teachers may sometimes introduce insect life cycle to their students by raising silkworms in the classroom as a science project. Students have a chance to observe complete life cycles of insect from egg stage to larvae, pupa, moth and eggs.

The silkworm has been raised for entertainment in China and South Africa. Children often pass on the eggs, creating a noncommercial population. The experience provides children with the opportunity to witness the lifecycle of silkworms. The practice of raising silkworms by children as pets has, in the non-silkfarming country of South Africa, led to the development of extremely hardy landraces of silkworm. This is because they are invariably subjected to hardships not encountered by commercially-farmed members of the species.[11] However, these worms, not being selectively bred as such, are probably inferior in silk production and may exhibit other undesirable traits.

The full genome of the silkworm was published in 2008 by the International Silkworm Genome Consortium.[5]

High genetic variability has been found in domestic lines of silkworms, though this is less than that among wild silkmoths (~83%). This suggests a single event of domestication, and that it happened over a short period of time, with a large number of wild worms having been collected for domestication.[13] Major questions, however, remain unanswered: “Whether this event was in a single location or in a short period of time in several locations cannot be deciphered from the data,” Research also has yet to identify the area in China where domestication arose.[14] 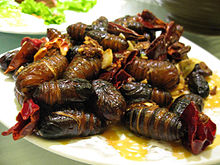 Like many insect species, silkworm pupae are eaten in some cultures (see Entomophagy). This unusual food may go by the English phrase "ground cucumber."

In China, there is a legend that the discovery of the silkworm's silk was by an ancient empress Lei Zu, the wife of the Yellow Emperor and the daughter of XiLing-Shi. She was drinking tea under a tree when a silk cocoon fell into her tea. As she picked it out and started to wrap the silk thread around her finger, she slowly felt a warm sensation. When the silk ran out, she saw a small larva. In an instant, she realized that this caterpillar larva was the source of the silk. She taught this to the people and it became widespread. There are many more legends about the silkworm.

The Chinese guarded their knowledge of silk. It is said that about AD 550, Christian monks smuggled silkworms, in a hollow stick, out of China and sold the secret to the Byzantine Empire.

Nosema bombycis is a microsporidium that kills 100% of silkworms hatched from infected eggs. This disease can be carried over from worms to moths, then eggs and worms again. This microsporidium comes from the food that silkworms eat. If silkworms get this microsporidium in their worm stage, there are no visible symptoms. However, mother moths will pass the disease onto the eggs, and 100% of worms hatching from the diseased eggs will die in their worm stage. To prevent this disease, it is therefore extremely important to rule out all eggs from infected moths by checking the moth’s body fluid under a microscope.

Botrytis bassiana is a fungus that destroys the entire silkworm body. This fungus usually appears when silkworms are raised under cold conditions with high humidity. This disease is not passed on to the eggs from moths, as the infected silkworms cannot survive to the moth stage. This fungus can spread to other insects.

Grasserie: If grasserie is observed in chawkie stage, then the chawkie larvae must have been infected while hatching or during chawkie rearing. Infected eggs can be disinfected by cleaning their surface prior to hatching. Infections can occur as a result of improper hygiene in the chawkie rearing house. This disease develops faster in early instar rearing.

Silkworm is the source of the "stiff silkworm", which is made from dried 4th or 5th instar larvae which have died of white muscardine disease. Its uses are to dispel flatulence, dissolve phlegm and relieve spasms.