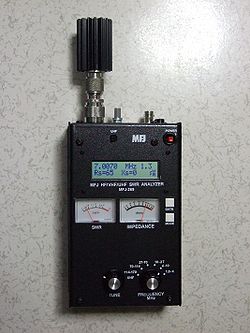 An antenna analyzer (also known as a noise bridge, RX bridge, SWR analyzer, or RF analyzer) is a device used for measuring the efficiency of antenna systems in radio electronics applications.

The antenna analyzer is essentially a bridge where two legs are frequency-dependent complex-valued impedances by impedance matching these legs. When the two impedances are the same the bridge will be balanced. Using this circuit it is possible to either measure the impedance of the antenna connected between ANT and GND, or it is possible to adjust an antenna until it has the same impedance as the network on the left hand side. The bridge can be driven either with white noise or a simple carrier (connected to drive). In the case of white noise the amplitude of the exciting signal can be very low and a radio receiver used as the detector. In the case where a simple carrier is used then depending on the level either a diode detector or a receiver can be used. In both cases a null will indicate when the bridge is balanced.

A typical antenna bridge, the trimmer capacitor (C) is adjusted to make the bridge balance when the variable capacitor on the left is half meshed. Hence the bridge will be able to detect if an aerial is either a resistive or inductive load.

Unlike an SWR meter which measures the standing wave ratio in the cable feeding the antenna, a complex-impedance antenna analyzer requires little or no transmitted power applied to the antenna. The SWR meter works by measuring the reflected wave from the antenna back to the transmitter, which is minimal when the antenna is balanced. A badly tuned antenna can produce enough reflected power to damage the transmitter. Since an RX bridge can be used without transmitting, there is no risk of transmitter damage.[1][2]

Many amateur radio operators use antenna analyzers to optimize an existing antenna or troubleshoot antenna related problems such as diagnosing a break in coax cable and finding faulty antenna components.[3]