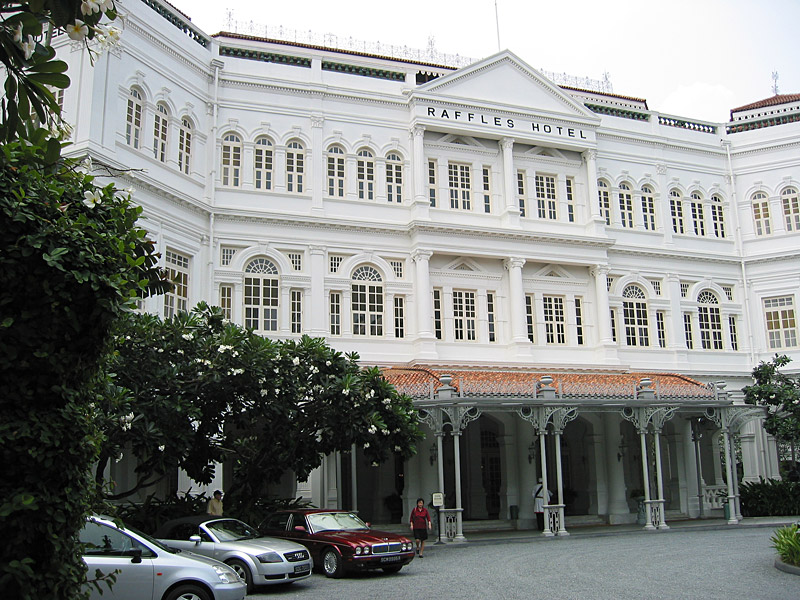 Raffles Hotel (Chinese: 莱佛士酒店) is a colonial-style in , dating from 1887, and named after Singapore's founder Sir Stamford Raffles. Managed by , it is known for its luxurious accommodation and superb restaurants. The hotel houses a tropical garden courtyard, museum, and Victorian-style theatre.

The hotel was founded by the four Armenian (Martin, Tigran, Aviet, and Arshak Sarkies). They opened the 10-room colonial bungalow at Beach Road and owned by an arab trader,Syed Mohamad Alsagoff on December 1, 1887. The original location was by the seaside, although continued reclamation means that the site is presently some 500 m away from the shore.

The hotel survived World War II despite the hardships Singapore faced and the use of the hotel at the end of the war as a transit camp for . In 1987 the government declared the hotel a National Monument.

It re-opened on September 16, 1991, after being restored to its state during its heyday in 1915. The hotel has built an extension with a similar design, for a shopping arcade and new rooms. In announcing the July 18, 2005 sale of parent company , chief executive Thomas J. Barrack said in part as the purchaser, "We deeply respect the historical significance of the Raffles Hotel Singapore and we consider it our responsibility to protect that legacy".

On , the hotel celebrated its 120th anniversary with , who turned 84 on the same day. [ [http://www.channelnewsasia.com/stories/singaporelocalnews/view/300229/1/.html Channelnewsasia.com ] ]

The hotel also houses the Raffles Hotel Museum, which showcases the rich history of the hotel.

*Raffles Hotel is reputedly where the sole surviving wild in Singapore was shot and made extinct. Some stories place this event in the Long Bar. Raffles itself claims the tiger had escaped from enclosure at a nearby "native show" and chased underneath the hotel's Bar & Billiard Room (a raised structure) and shot to death there on August 13, 1902.
*Raffles is where the was invented. The was invented by bartender Ngiam Tong Boon between 1910 and 1915.
*Raffles is the setting for Murakami Ryu's novel and film titled, "Raffles Hotel." The film was shot on location.
*The site of the hotel was originally the location of the oldest girls' school in Singapore (1842), now called St. Margaret's. It was founded by , the missionary wife of .
*The hotel was featured as a Japanese stronghold in "".
*Raffles Hotel was the subject of "'s Orient" for .
*The hotel featured in episodes of the 's "Tenko".
*Long Bar is featured in Peace Arch Entertainment's "UberGuide" television travel series as one of the top ten bars in the world.