A pressure volume diagram (or PV diagram, or volume-pressure loop)[1] is used to describe corresponding changes in volume and pressure in a system. They are commonly used in thermodynamics and cardiovascular physiology.

PV diagrams, originally called indicator diagrams, were developed in the 18th century as tools for understanding the efficiency of steam engines.

A PV diagram plots the change in pressure P with respect to volume V for some process or processes. Typically in thermodynamics, the set of processes forms a cycle, so that upon completion of the cycle there has been no net change in state of the system; ie, the device returns to the starting pressure and volume.

The figure shows the features of a typical PV diagram. A series of numbered states (1 through 4) are noted. The path between each state consists of some process (A through D) which alters the pressure or volume of the system (or both). 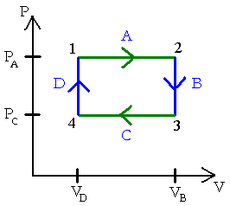 A key feature of the diagram is that the amount of energy expended or received by the system as work can be estimated as the area under the curve on the chart. For a cyclic diagram, the net work is that enclosed by the curve. In the example given in the figure, the processes 1-2-3 produce a work output, but processes from 3-4-1 require a smaller energy input to return to the starting position / state; thus the net work is the difference between the two.

Note that this figure is highly idealized, and a diagram showing the processes in a real device would tend to depict a more complex shape of the PV curve. (See section Applications, below). 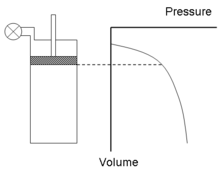 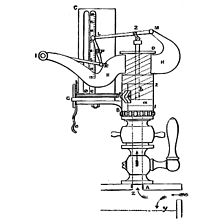 The PV diagram, then called an indicator diagram, was developed by James Watt and his employee John Southern (1758–1815) to improve the efficiency of engines. In 1796, Southern developed the simple, but critical, technique to generate the diagram by fixing a board so as to move with the piston, thereby tracing the "volume" axis, while a pencil, attached to a pressure gauge, moved at right angles to the piston, tracing "pressure".

The gauge enabled Watt to calculate the work done by the steam while ensuring that its pressure had dropped to zero by the end of the stroke, thereby ensuring that all useful energy had been extracted. The total work could be calculated from the area between the "volume" axis and the traced line. The latter fact had been realised by Davies Gilbert as early as 1792 and used by Jonathan Hornblower in litigation against Watt over patents on various designs. Daniel Bernoulli had also had the insight about how to calculate work.

Watt used the diagram to make radical improvements to steam engine performance and long kept it a trade secret. Though it was made public in a letter to the Quarterly Journal of Science in 1822,[2] it remained somewhat obscure. John Farey, Jr. only learned of it on seeing it used, probably by Watt's men, when he visited Russia in 1826.

In 1834, Émile Clapeyron used a diagram of pressure against volume to illustrate and elucidate the Carnot cycle, elevating it to a central position in the study of thermodynamics.[3]

Later instruments (illus.) used paper wrapped around a cylindrical barrel with a pressure piston inside it, the rotation of the barrel coupled to the piston crosshead by a weight- or spring-tensioned wire.

PV diagrams can be used to estimate the net work performed by a thermodynamic cycle. The net work is the area enclosed by the PV curve in the diagram. This usage derived from the development of indicator diagrams which were used to estimate the performance of a steam engine.[4] Specifically, the diagram records the pressure of steam versus the volume of steam in a cylinder, throughout a piston's cycle of motion in a steam engine. The diagram enables calculation of the work performed and thus can provide a measure of the power produced by the engine.[5] 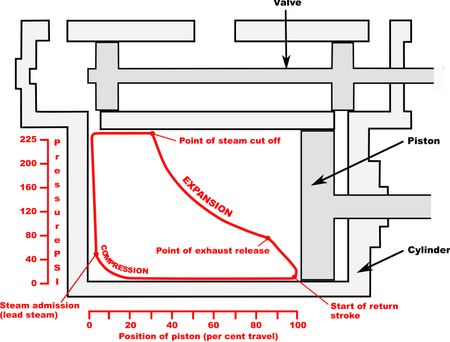 To exactly calculate the work done by the system it is necessary to calculate the integral of the pressure with respect to volume. One can often quickly calculate this using the PV diagram as it is simply the area enclosed by the cycle.

Note that in some cases specific volume will be plotted on the x-axis instead of volume, in which case the area under the curve represents work per unit mass of the working fluid (ie J/kg).

In cardiovascular physiology, the diagram is often applied to the left ventricle, and it can be mapped to specific events of the cardiac cycle. PV loop studies are widely used in basic research and preclinical testing, to characterize the intact heart's performance under various situations (effect of drugs, disease, characterization of mouse strains)

The sequence of events occurring in every heart cycle is as follows. The left figure shows a PV loop from a real experiment; letters refer to points.

As it can be seen, the PV loop forms a roughly rectangular shape and each loop is formed in an anti-clockwise direction.

Very useful information can be derived by examination and analysis of individual loops or series of loops, for example:

See external links for a much more precise representation.