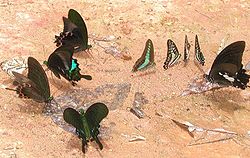 Mud-puddling is the phenomenon mostly seen in butterflies and involves their aggregation on substrates like wet soil, dung and carrion to obtain nutrients such as salts and amino acids.[1] This behaviour has also been seen in some other insects, notably the leafhoppers.[2]

Lepidoptera (butterflies and moths) are diverse in their strategies to gather liquid nutrients. Typically, mud-puddling behavior takes place on wet soil. But even sweat on human skin may be attractive to butterflies.[3] The most unusual sources include blood and tears (see below).

This behaviour is restricted to males in many species, and in some like Battus philenor the presence of an assembly of butterflies on the ground acts as a stimulus to join the presumptive mud-puddling flock.[4]

In tropical India this phenomenon is mostly seen in the post-monsoon season. The groups can include several species often including members of the Papilionidae and Pieridae.[5]

Males seem to benefit from the sodium uptake through mud-puddling behaviour with an increase in reproductive success. The collected sodium and amino acids are often transferred to the female with the spermatophore during mating as a nuptial gift. This nutrition also enhances the survival rate of the eggs.[6]

Other sources of liquid nutrients 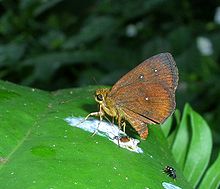 Some Orthoptera – e.g. the Yellow-spined Bamboo Locust (Ceracris kiangsu) – are attracted to human urine, specifically to the sodium and ammonium ions in it.[8] Those Lepidoptera that are attracted to dung (e.g. Zeuxidia spp.) or carrion seem to be prefer ammonium ions rather than sodium.[9] By rotting, fruits make available to butterflies sugars and their derivatives such as alcohols, which are mainly useful as carbohydrate "fuel" for ATP production.[10]

In Borneo lowland rain forest, numerous species of butterflies regularly visit decaying fruit to drink. This behavior is mainly opportunistic, though some are highly attracted to old fruit, notably Satyrinae (e.g. Neorina lowii) and Limenitidinae such as Bassarona dunya.[11] 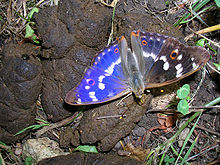 Carrion-feeding has evolved independently in several lineages. Specialist carrion-feeders may even have the ability to smell out and home in on rotting meat over hundreds of meters. In the Bornean Charaxinae, Specialist (Charaxes bernardus) or opportunistic (some other Charaxes and Polyura) tend to have a markedly larger bulk and smaller wings, making them more dashing, maneuvrable flyers than fruit specialists like Prothoe franck and opportunistic fruit visitors such as Charaxes durnfordi. Other butterflies like most Pieridae, Papilionidae and Morphinae are rarely if ever seen on carrion, dung and rotting fruit, though they may be avid mud-puddlers in the strict sense. Altogether, the Nymphalidae show the highest variety of nutrient-gathering strategies among the butterflies; the Limenitidinae have numerous mud-puddlers that also frequently visit dung but avoid fruits and carrion (namely the genus Limenitis),[11] and some which are attracted to any pungent substance.[12]

Certain moths, mainly of the subfamily Calpinae, are somewhat notorious for their blood- and tear-drinking habits. Hemiceratoides hieroglyphica of Madagascar has been noted to visit and suck tears by inserting their proboscis into the closed eyelids of roosting birds.[13] Some species of the genus Calyptra are called "vampire moths" as they suck blood from sleeping vertebrates, including humans. Ophthalmotropy (= eye-attraction) or lachryphagy (= tear drinking) is noted in a number of unrelated moths which visit mammals.[14]