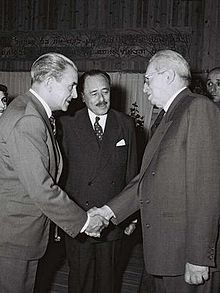 Fernández Crespo belonged to the Uruguayan National Party. Formerly a schoolteacher by profession, by the time he assumed Presidential office he had achieved a reputation as a prolific sponsor of reformist legislation, including in the fields of accident insurance and pensions. From 1954 till 1958 he served as minority member of the National Council of Government of Uruguay.

In 1963 his National Party colleague Faustino Harrison stepped down from the Presidency of the Council.

He became President of the National Council of Government of Uruguay in 1963.

In 1964 he was succeeded as President by another National Party colleague, Luis Giannattasio, who, however, was to die in office.

Fernández Crespo himself died a few weeks after leaving office in 1964.

A road in the capital, Montevideo, is named after him.