In physical chemistry, the van der Waals force (or van der Waals interaction), named after Dutch scientist Johannes Diderik van der Waals, is the sum of the attractive or repulsive forces between molecules (or between parts of the same molecule) other than those due to covalent bonds or to the electrostatic interaction of ions with one another or with neutral molecules.[1] The term includes:

It is also sometimes used loosely as a synonym for the totality of intermolecular forces. Van der Waals forces are relatively weak compared to normal chemical bonds, but play a fundamental role in fields as diverse as supramolecular chemistry, structural biology, polymer science, nanotechnology, surface science, and condensed matter physics. Van der Waals forces define the chemical character of many organic compounds. They also define the solubility of organic substances in polar and non-polar media. In low molecular weight alcohols, the properties of the polar hydroxyl group dominate the weak intermolecular forces of van der Waals. In higher molecular weight alcohols, the properties of the nonpolar hydrocarbon chain(s) dominate and define the solubility. Van der Waals-London forces grow with the length of the nonpolar part of the substance.

Van der Waals forces include attractions between atoms, molecules, and surfaces, as well as other intermolecular forces. They differ from covalent and ionic bonding in that they are caused by correlations in the fluctuating polarizations of nearby particles (a consequence of quantum dynamics[2]).

The Lennard-Jones potential is often used as an approximate model for the isotropic part of a total (repulsion plus attraction) van der Waals force as a function of distance.

For macroscopic bodies with known volumes and numbers of atoms or molecules per unit volume, the total van der Waals force is often computed based on the "microscopic theory" as the sum over all interacting pairs. It is necessary to integrate over the total volume of the object, which makes the calculation dependent on the objects' shapes. For example, the van der Waals interaction energy between spherical bodies of radii R1 and R2 and with smooth surfaces was approximated in 1937 by Hamaker[5] (using London's famous 1937 equation for the dispersion interaction energy between atoms/molecules[6] as the starting point) by:

where A is the Hamaker coefficient, which is a constant (~10−19 - 10−20 J) that depends on the material properties (it can be positive or negative in sign depending on the intervening medium), and z is the center-to-center distance, i.e. the sum of R1, R2, and r (the distance between the surfaces):

In the limit of close-approach, the spheres are sufficiently large compared to the distance between them, i.e.

, so that equation (1) for the potential energy function simplifies to:

The van der Waals force between two spheres of constant radii (R1 and R2 are treated as parameters) is then a function of separation since the force on an object is the negative of the derivative of the potential energy function,

The van der Waals forces between objects with other geometries using the Hamaker model have been published in the literature.[7][8][9]

From the expression above, it is seen that the van der Waals force decreases with decreasing particle size (R). Nevertheless, the strength of inertial forces, such as gravity and drag/lift, decrease to a greater extent. Consequently, the van der Waals forces become dominant for collections of very small particles such as very fine-grained dry powders (where there are no capillary forces present) even though the force of attraction is smaller in magnitude than it is for larger particles of the same substance. Such powders are said to be cohesive, meaning they are not as easily fluidized or pneumatically conveyed as easily as their more coarse-grained counterparts. Generally, free-flow occurs with particles greater than about 250 μm.

The microscopic theory assumes pairwise additivity. It neglects many-body interactions and retardation. A more rigorous approach accounting for these effects, called the "macroscopic theory," was developed by Lifshitz in 1956.[10] Langbein derived a much more cumbersome "exact" expression in 1970 for spherical bodies within the framework of the Lifshitz theory[11] while a simpler macroscopic model approximation had been made by Derjaguin as early as 1934.[12] Expressions for the van der Waals forces for many different geometries using the Lifshitz theory have likewise been published. 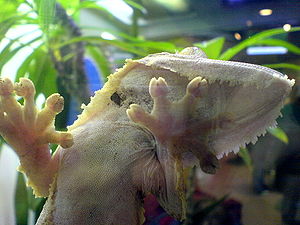 The ability of geckos – which can hang on a glass surface using only one toe – to climb on sheer surfaces has been attributed to the van der Waals forces between these surfaces and the spatula (plural spatulae), or microscopic projections, which cover the hair-like setae found on their footpads.[13][14] A later study suggested that capillary adhesion might play a role,[15] but that hypothesis has been rejected by more recent studies.[16] [17] [18] There were efforts in 2008 to create a dry glue that exploits the effect.[19] In 2011, a paper was published relating the effect to both velcro-like hairs and the presence of lipids in gecko footprints.[20]