Guess Who's Coming to Dinner

Guess Who's Coming to Dinner 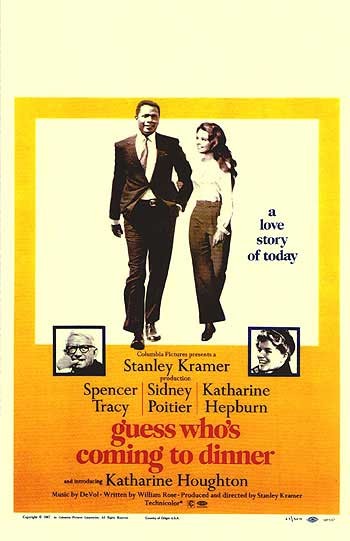 The movie concerns Joanna "Joey" Drayton (Houghton), a young who has had a whirlwind romance with Dr. Prentice (Poitier), an she met while on a holiday in . Prentice plans to fly to New York later that night then on to an assignment in Switzerland. Joanna plans to join him there soon to be married even though she has only known him for a very short period of time. The plot is centered on Joanna’s return to her liberal American home in San Francisco, bringing her new to dinner to meet her parents (Tracy and Hepburn), and the reaction of family and friends.

"Guess Who's Coming to Dinner" won the for screenwriter, William Rose. also won the . The 1967 groundbreaking story dealt with the controversial subject of marriage which had been illegal historically in most of the United States, and was still illegal in 17 Southern U.S. States up until June 12 of that year. Although legalized throughout the U.S. following the Supreme Court decision in "", the topic was still taboo in many areas.

According to director , he and Rose intentionally debunked ethnic stereotypes; the young doctor, a typical role for the young Sidney Poitier, was purposely created idealistically perfect so that the only possible objection to his marrying Joanna would be his race, or the fact she only met him ten days earlier. Therefore, he has graduated from a top school, begun innovative medical initiatives in , refused to have premarital sex with his fiancée despite her willingness, and leaves money on his future father-in-law's desk in payment for a long distance phone call he has made.

Stanley Kramer stated later that the principals believed so strongly in the premise that they agreed to act in the project even before seeing the script. Spencer Tracy was dying and insurance companies refused to cover him; Kramer and Hepburn put their salaries in so that if he died, filming could be completed with another actor. The filming schedule was altered to accommodate Tracy's failing health.

Criticism was more positive than negative, with most critics praising the elegant, understated performances. The film also attempted to touch upon , as when both the doctor's father and the household cook Matilda 'Tillie' Binks, played by in a small but memorable role, take the young man to task for his perceived presumption.The film was also memorable for being the last on-screen pairing of Tracy and Hepburn (Tracy died seventeen days after filming ended). In Tracy's final speech of the film, Hepburn's tears were real&mdash;they both knew that this would be the last line of his last film, that he had not much longer to live. Hepburn never saw the completed film; she said the memories of Tracy were too painful. The film was released in December 1967, six months after his death. [ [http://www.imdb.com/title/tt0061735/ imdb releaseinfo] ]

The film also featured and as Mr. and Mrs. Prentice. Richards was nominated for an Oscar for her role but lost to . is also featured as a co-worker of Christina's. The movie's Oscar-nominated score was composed by . [Joel Whitburn, Top Pop Albums 1955-2001 (Menomonee Falls, WI: Record Research, 2001), 1018.]

The original version of this film that played in theaters in 1967 contained the sarcastic one-liner "The Reverend !", issued by the sassy black maid Tillie in response to the question, "Guess who's coming to dinner?", which is the key line of dialogue from which the film got its title. However, after the assassination of Martin Luther King on April 4, 1968, this line was removed from the film, so by August 1968, almost all theater showings of this film had this line omitted. As early as 1969, the line was restored to many but not most prints, and the line was preserved in the VHS and DVD versions of the film as well.

The 2005 film "Guess Who" starring and is a loose remake.