The trait of extraversion-introversion is a central dimension of human personality theories.

Extraverts (also spelled extroverts[1]) tend to be gregarious, assertive, and interested in seeking out external stimulus. Introverts, in contrast, tend to be introspective, quiet and less sociable. They are not necessarily loners but they tend to have fewer numbers of friends. Introversion does not describe social discomfort but rather social preference: an introvert may not be shy but may merely prefer fewer social activities. Ambiversion is a balance of extrovert and introvert characteristics. Most people (about 68% of the population) are considered to be ambiverts, while extraverts and introverts represent the extremes on the scale, with about 16% representation for each.[2]

Extraversion and introversion are typically viewed as a single continuum. Thus, to be high on one is necessarily to be low on the other. Carl Jung and the authors of the Myers-Briggs provide a different perspective and suggest that everyone has both an extraverted side and an introverted side, with one being more dominant than the other. In any case, people fluctuate in their behavior all the time, and even extreme introverts and extraverts do not always act according to their type.

Extraversion is "the act, state, or habit of being predominantly concerned with and obtaining gratification from what is outside the self".[4] Extraverts tend to enjoy human interactions and to be enthusiastic, talkative, assertive, and gregarious. They take pleasure in activities that involve large social gatherings, such as parties, community activities, public demonstrations, and business or political groups. Politics, teaching, sales, managing and brokering are fields that favor extraversion. An extraverted person is likely to enjoy time spent with people and find less reward in time spent alone. They tend to be energized when around other people, and they are more prone to boredom when they are by themselves.

Introversion is "the state of or tendency toward being wholly or predominantly concerned with and interested in one's own mental life".[4] Introverts are people whose energy tends to expand through reflection and dwindle during interaction.[5] Introverts tend to be more reserved and less outspoken in groups. They often take pleasure in solitary activities such as reading, writing, using computers, hiking and fishing. The archetypal artist, writer, sculptor, engineer, composer, and inventor are all highly introverted. An introvert is likely to enjoy time spent alone and find less reward in time spent with large groups of people, though he or she may enjoy interactions with close friends. Trust is usually an issue of significance: a virtue of utmost importance to an introvert choosing a worthy companion. They prefer to concentrate on a single activity at a time and like to observe situations before they participate, especially observed in developing children and adolescents.[6] Introverts are easily overwhelmed by too much stimulation from social gatherings and engagement. They are more analytical before speaking.[7]

Introversion is not the same as being shy or being a social outcast. Introverts prefer solitary activities over social ones, whereas shy people (who may be extraverts at heart) avoid social encounters out of fear,[8] and the social outcast has little choice in the matter of his or her solitude.

Although many people view being introverted or extraverted as a question with only two possible answers, most contemporary trait theories (e.g. the Big Five) measure levels of extraversion-introversion as part of a single, continuous dimension of personality, with some scores near one end, and others near the half-way mark.[9] Ambiversion is a term used to describe people who fall more or less directly in the middle and exhibit tendencies of both groups.[4][10] An ambivert is normally comfortable with groups and enjoys social interaction, but also relishes time alone and away from the crowd.

Assessing extraversion and introversion is normally accomplished through self reporting. A questionnaire might ask if the test-taker agrees or disagrees with statements such as I am the life of the party or I think before I talk.

In this example, Ben and Caitlyn are extraverted, Sarah and Thomas are introverted, and Mark is ambiverted.

Self-report questionnaires have obvious limitations in that people may misrepresent themselves either intentionally or through lack of self-knowledge. As such, it is also common to use peer reporting or third-party observation.

Another approach is to present test takers with various sets of adjectives (e.g., thoughtful, talkative, energetic, independent) and ask which describes them most and least. Psychological measures of this trait may break it down into subfactors including warmth, affiliation, positive affect, excitement seeking, and assertiveness/dominance seeking.

Hans Eysenck described extraversion-introversion as the degree to which a person is outgoing and interactive with other people. These behavioral differences are presumed to be the result of underlying differences in brain physiology.[12] Extraverts seek excitement and social activity in an effort to heighten their arousal level, whereas introverts tend to avoid social situations in an effort to keep such arousal to a minimum. Eysenck designated extraversion as one of three major traits in his P-E-N model of personality, which also includes psychoticism and neuroticism.

Eysenck originally suggested that extraversion was a combination of two major tendencies, impulsiveness and sociability. He later added several other more specific traits, namely liveliness, activity level, and excitability. These traits are further linked in his personality hierarchy to even more specific habitual responses, such as partying on the weekend. 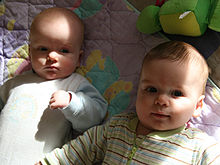 Twin studies find that extraversion/introversion has a genetic component.

The relative importance of nature versus environment in determining the level of extraversion is controversial and the focus of many studies. Twin studies find a genetic component of 39% to 58%. In terms of the environmental component, the shared family environment appears to be far less important than individual environmental factors that are not shared between siblings.[14]

Extraversion has been linked to higher sensitivity of the mesolimbic dopamine system to potentially rewarding stimuli.[16] This in part explains the high levels of positive affect found in extraverts, since they will more intensely feel the excitement of a potential reward. One consequence of this is that extraverts can more easily learn the contingencies for positive reinforcement, since the reward itself is experienced as greater.

One study found that introverts have more blood flow in the frontal lobes of their brain and the anterior or frontal thalamus, which are areas dealing with internal processing, such as planning and problem solving. Extraverts have more blood flow in the anterior cingulate gyrus, temporal lobes, and posterior thalamus, which are involved in sensory and emotional experience.[17] This study and other research indicates that introversion-extraversion is related to individual differences in brain function.

Extraverts and introverts have a variety of behavioral differences. According to one study, extraverts tend to wear more decorative clothing, whereas introverts prefer practical, comfortable clothes.[18] Extraverts are likely to prefer more upbeat, conventional, and energetic music than introverts.[19] Personality also influences how people arrange their work areas. In general, extraverts decorate their offices more, keep their doors open, keep extra chairs nearby, and are more likely to put dishes of candy on their desks. These are attempts to invite co-workers and encourage interaction. Introverts, in contrast, decorate less and tend to arrange their workspace to discourage social interaction.[20]

Although extraverts and introverts have real personality and behavior differences, it is important to avoid pigeonholing or stereotyping by personality. Humans are complex and unique, and because extraversion varies along a continuum, they may have a mixture of both orientations. A person who acts introverted in one scenario may act extraverted in another, and people can learn to act “against type” in certain situations. Jung's theory states that when someone's primary function is extraverted, his secondary function is always introverted (and vice versa).[3]

Researchers have found a correlation between extraversion and happiness. That is, more extraverted people tend to report higher levels of happiness than introverts.[21][22] This does not mean that introverts are unhappy. Extraverts simply report experiencing more positive emotions, whereas introverts tend to be closer to neutral. This may be due to the fact that extraversion is socially preferable in Western culture and thus introverts feel less desirable. In addition to the research on happiness, other studies have found that extraverts tend to report higher levels of self-esteem than introverts.[23][24] Others suggest that such results reflect socio-cultural bias in the survey itself.[25][26] Also, according to Carl Jung, introverts acknowledge more readily their psychological needs and problems, whereas extroverts tend to be oblivious to them because they focus more on the outer world.[3]

Extraversion is perceived as socially desirable in Western culture, but it is not always an advantage. For example, extraverted youths are more likely to engage in delinquent behavior.[27] Conversely, while introversion is perceived as less socially desirable, it is strongly associated with positive traits such as intelligence[28] and "giftedness."[29][30] For many years, researchers have found that introverts tend to be more successful in academic environments, which extraverts may find boring.[31]

Career counselors often use personality traits, along with other factors such as skill and interest, to advise their clients.[32] Some careers such as computer programming may be more satisfying for an introverted temperament, while other areas such as sales may be more agreeable to the extraverted type.

Although neither introversion nor extraversion is pathological, psychotherapists can take temperament into account when treating clients. Clients may respond better to different types of treatment depending on where they fall on the introversion/extraversion spectrum. Teachers can also consider temperament when dealing with their pupils, for example acknowledging that introverted children need more encouragement to speak in class while extraverted children may grow restless during long periods of quiet study.

It is asserted that Americans live in an "extroverted society"[33] that rewards extrovert behavior and rejects introversion. "American culture values extroverted qualities more, and people often feel like they've been given the 'short end of the stick' after receiving their results on extroversion/introversion tests."[34] Other cultures, such as Central Europe, Japan or regions where Buddhism, Sufism etc. prevail, prize introversion.[7]

In the United States, researchers have found that people living in the midwestern states of North Dakota, South Dakota, Nebraska, Minnesota, Wisconsin, and Illinois score higher than the U.S. average on extraversion. Utah and the southeastern states of Florida and Georgia also score high on this personality trait. The most introverted states in the United States are Maryland, New Hampshire, Alaska, Washington, and Vermont. People who live in the northwestern states of Idaho, Montana, and Wyoming are also relatively introverted.[36]