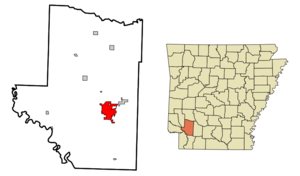 Hope is most known as the birthplace of the 42nd , (see ). At the in , Clinton ended his acceptance speech by saying, "I still believe in a place called Hope." The city tagged this statement as their unofficial . The city converted its to a on Clinton's life.

Hope is also the birthplace of the former Governor , an unsuccessful candidate for the 2008 Republican presidential .

A leading figure in the restoration of nearby in Washington, Arkansas, was (1914-1994) of Hope, who served as president of the Pioneer Washington Restoration Foundation, Inc., from 1959-1960 and again from 1973-1990. In 1966, Pilkinton was the unsuccessful Democratic for , having narrowly been defeated by the Republican , the running-mate of , who won the first of his two two-year terms as governor that year. Pilkinton is interred in Rose Hill Cemetery.

A former Republican from , , is buried in Hope, but he did not live there. It was the hometown of his wife, the former Mary Pauline "Polly" Tolleson, a graduate of . Also, Hope is home to a few figures such as Henry C. Yerger, who established a school for blacks in 1895.

Paul Klipsch founded Klipsch and Associates in Hope in 1946. Klipsch invented the world famous speaker, a folded horn loaded speaker that revolutionized the industry. The Klipschorn and a number of other speaker lines are still manufactured in Hope by .

The Hope Municipal Airport was the Southwestern Proving Ground during and had the claim of the third longest runway in the United States. Paul Klipsch used to joke that his desk was not in the same spot as the one he had during his service at the Proving Ground; it was on the other side of the room.

Hope is also known for growing s and continues to produce records for the largest specimens in the world. The last record was set by Lloyd Bright in 2005 with a 268.8 pound watermelon. The Watermelon Festival is celebrated annually from - during the second week of . The watermelon is used in the logo and the Hope slogan: "A Slice of the Good Life."

There were 3,961 households out of which 34.3% had children under the age of 18 living with them, 40.8% were married couples living together, 21.0% had a female householder with no husband present, and 33.4% were non-families. Of 3,961 households, 192 are unmarried partner households: 175 heterosexual, 11 same-sex male, and 6 same-sex female households. 29.3% of all households were made up of individuals and 13.8% had someone living alone who was 65 years of age or older. The average household size was 2.61 and the average family size was 3.20.