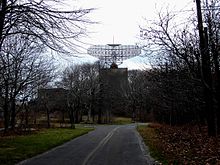 This AN/FPS-35 Radar at Camp Hero State Park in Montauk, New York State on Long Island, is a centerpiece of the "Montauk Project Conspiracy".

The Montauk Project was alleged to be a series of secret United States government projects conducted at Camp Hero or Montauk Air Force Station on Montauk, Long Island for the purpose of developing psychological warfare techniques and exotic research including time travel. Jacques Vallée[1] describes allegations of the Montauk Project as an outgrowth of stories about the Philadelphia Experiment.

Conspiracy theories about the Montauk Project have circulated since the early 1980s. According to astrophysicist and UFO researcher Jacques Vallée, the Montauk Experiment stories seem to have originated with the account of Preston Nichols, who claimed to have recovered repressed memories of his own involvement.[1]

There is no definitive version of the Montauk Project narrative, but the most common accounts describe it as an extension or a continuation of the Philadelphia Experiment, alleged to have taken place in 1943.[citation needed] According to proponents, the Philadelphia Experiment supposedly aimed to render the USS Eldridge invisible to radar detection with disastrous results.[citation needed] Surviving researchers from the Philadelphia Experiment met in 1952-1953 with the aim of continuing their earlier work on manipulating the "electromagnetic shielding" that had been used to make the USS Eldridge invisible to radar and to the naked eye, and they wished to investigate the possible military applications of magnetic field manipulation as a means of psychological warfare.[citation needed]

Common versions of the tale have the researchers' initial proposals rebuffed by the United States Congress due to fears over the potential dangers of the research. Instead, the researchers bypassed Congress and received support from the Department of Defense, after promising the development of a weapon that could instantly trigger psychotic symptoms. The conspiracy theory relates that the funding came from a large cache of Nazi gold found in a train by U.S. soldiers near the Swiss border in France. Proponents allege that the train was destroyed, and all the soldiers involved in the discovery were killed as part of a coverup.[citation needed]

After funding was in place, work allegedly began at Brookhaven National Laboratory (BNL) on Long Island, New York under the name of the "Phoenix Project", but the project soon required a large and advanced radar dish. The United States Air Force had a decommissioned base at Montauk, New York, not far from BNL, which had a complete SAGE radar installation. The site was large and remote, with Montauk Point not yet a tourist attraction. Water access supposedly allowed equipment to be moved in and out undetected. Key to the Montauk Project allegations, the SAGE radar worked on a frequency of 400 MHz - 425 MHz, providing access to the range of 410 MHz - 420 MHz signals said by theory proponents to influence the human mind.[citation needed]

However, Montauk Air Force Station remained in operation until 1981. The site was opened to the public on September 18, 2002 as Camp Hero State Park. The radar tower has been placed on the State and National Register of Historic Places. There are plans for a museum and interpretive center, focusing on World War II and Cold War-era history.