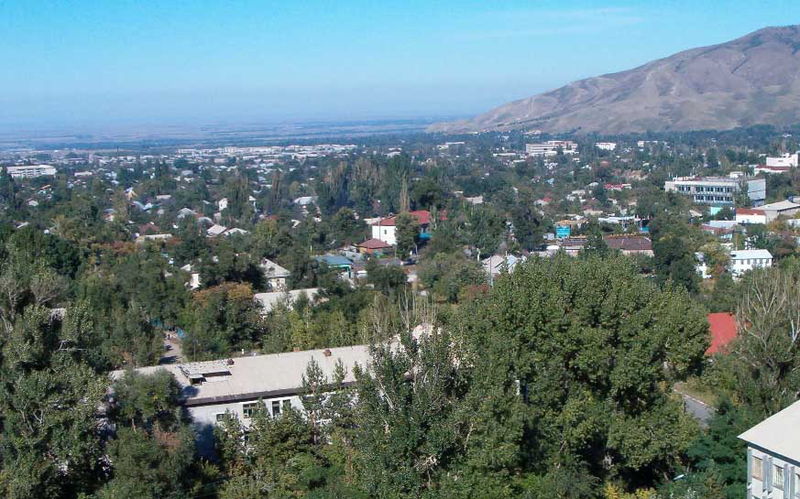 Talgar ( _kz. Талғар IPA|/tɑlˈɣɑr/ ; _ru. Талгар) is a town in , southeastern . It is the administrative center of . The town is located between and , 25 km from Almaty.

There are several possible explanations for the town's name. The most obvious is that Talgar originates from a later modified name of an ancient settlement of Talkhir, situated in the Talgar suburbs.

The first records of Talgar settlement were made by a geographer in an ancient geographical treatise ("Borders of The World") in 982. The settlement bore a name Talkhiz and was situated in the mountains of at the borders of tribes and . The geographer described inhabitants of Talkhiz as "brave, martial, and valiant people". Scientists analyzed the name of the settlement and concluded it to have been distorted by a copyist, so that originally it sounded as “Talkhir”. However, Talkhir (Talgar) is a well-known name in modern . A town neighboring to , its river and the highest peak of also bear this name. It became obvious that the ancient settlement had been situated somewhere close by. Thus, archeological excavations in the southeastern suburbs of modern Talgar revealed the mysterious settlement.

Thanks to the work of archeologists I.I. Kopylov, A.Kh. Morgulin, K.M. Baipakov, and T.V. Savelyeva the scenario of the development of Talgar settlement was reconstructed.

In the 9th century a fortification belonging to the head of a tribe was founded on the place of Talgar settlement. The locality was chosen because it was on the and situated at the foothills of , incorporating rich land sources and summer pastures there.

With time Talgar settlement became popular with merchants and craftspeople. First they served the owner of the settlement and his court, but later they started producing goods for nomads and surrounding settlements. Such was common in at that time.

By the beginning of the Talgar had become a city. It was a time of political and economic change in Kazakhstan history, since the country got controlled by the feudal . The territory of Kazakhstan was conditionally divided into several appanges governed by Karakhanid deputies. Talgar developed rapidly in this period and, like other cities of th valley it became the capital of an economically and geographically important territory.

After a fortification, , was established in February 1854 in nearby Almaty, the local government decided to further fortify the eastern border with the . Three s were founded close to Vernoye: Sofiiskaya (Talgar), Nadezhdinskaya (), and Lyubavinskaya (). According to a legend the stanitsas were named after the three daughters of a local governor.

First information concerning the founding of Sofiiskaya stanitsa was registered in February-March 1858 when and 24 Siberian families built several houses on the right bank of the Talgar river. “38090 s of land for tillage and buildings and 2636 dessiatinas of neudobitsa (inarable land)” were apportioned for settlement of the stanitsa.

Talgar is located at the southern boader of . Talgar's official geographic coordinates are coord|43|18|0|N|77|14|0|E|. The town sits at the foot of which is a mountain range of and a part of the . The town stretches along the river for approximately 6 km from the highest point in to the lowest point in .

Talgar has a total area of 18.8 square km (7.3 mi²). The grade of the town's built-up areas is consistent with the natural uneveness of its overall natural geography. The average land elevation is 1250 m above . The lowest points are in the northern part of the town at 1000 m, while the highest points at 1500 m are located in the town's south side.

Talgar mountains is an informal name for a north-western part of Zailiisky Alatau adjacent to the town. The Talgar mountains are a popular tourist destination famous for its mountaineering routes, camping and recreational facilities. and are partially situated in the mountains.

The Talgar mountains are peculiar of vertical zonality, that specified a wide variety of landscapes. The high-mountainous nival glacial band occupies altitudes of 3000 m and more above sea level and is characterized by sharp tops and steep stony declines. It is the place of formation of glaciers whose tongues are penetrating into spur valleys of the head rivers. The basic type of vegetation is alpine meadows, rich in es, alpine poppies, daisies and original high-mountainous sedge bogs. is the highest peak of Talgar mountains and as well. Its highest point reaches 4,979 metres above the sea level. The peak is located about 10 km far from the center of Talgar.

The sub-alpine chord (2400-3000 m) of Talgar mountains is characterized by dominance high-grass meadows and steppe with the bushes of junipers on southern stony slopes. The erosive relief of middle part of the mountains occupies absolute altitudes in a range of 1700 up to 3000 m. The gorges and narrow valleys with the depth up to 700 m. with steep slopes are most typical here. The relief of the given chord is notable for intensive by slope processes: talus, downfalls and stonefalls. Bush-meadow-coniferous forest chord has a composite vegetative overlying strata. Northern slopes are occupied by endemic fur-trees of Schrenk, while southern by bushes of dogrose. Also there are aspen forests, and sometimes birch woods. Bushes and small-leaved wood band (1400-1600 m) is located in a submontane part. It was affected by antropogenic factor, which has changed a tentative vegetative overlying strata. The groves of Siverse apple-tree and wild apricot are remained. On southern slopes rosaries are widely spread.

In general the territory is the young mountain land. Thus, Talgar mountains are notable for catastrophic cyclic natural processes such as earthquakes, mudflows, and snow avalanches.