Morticia A. Addams (née Frump) is the fictional matriarch of "The Addams Family", created by cartoonist Charles Addams and based on his first wife Barbara (who became the second wife of John Hersey, a colleague at The New Yorker and the author of Hiroshima (book)).

Morticia is the wife of Gomez Addams and mother of Wednesday Addams and Pugsley Addams. The character originated in the Charles Addams cartoons for The New Yorker magazine in the 1930s. In the cartoons, none of the family members had names. When the characters were adapted to the 1964 television series, Charles Addams gave her the name "Morticia", implying "death" (derived from "mors mortis", the Latin word for "death", and perhaps also from "mortician"). Morticia's maiden name is "Frump" and she has an older sister named Ophelia (also played by Carolyn Jones). In the television series, her mother was named Hester Frump (played by Margaret Hamilton). Her mother-in-law is Grandmama Addams. In the 1990s Addams Family films, Grandmama is actually Morticia's mother, not Gomez's.

Morticia is described as a vamp; she has pale skin and long black hair. She commonly wears black gothic dresses to match her hair, tightly form fitting, with a hobble skirt. According to Wednesday, Morticia applies baking powder to her face instead of actual makeup. In each episode, she easily allures her husband Gomez by speaking French (or any other foreign language for that matter). Morticia is musically inclined, and is often seen freely strumming a shamisen. She frequently enjoys cutting the buds off of roses which she discards, keeping only the stems. She also has a carnivorous plant, an African Strangler named Cleopatra, which she enjoys feeding. Morticia also has an affinity for making certain that her family upholds the traditional Addams way, and is usually the most taken aback when one of the clan goes astray and does something "pleasant."

Morticia's family tree can be traced back to Salem, Massachusetts, and witchcraft is also implied at times in the television series. [2]For example, Morticia likes to "smoke," an activity that does not involve cigarettes or cigars as her husband, but smoke instead emanates from below her. [3] 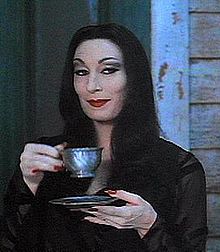 Anjelica Huston as Morticia in The Addams Family film (1991).

Morticia was portrayed by Carolyn Jones in the TV series of the 1960s and by Anjelica Huston in The Addams Family (1991) and its sequel Addams Family Values (1993). Huston's portrayal of Morticia was always illuminated by a ghostly glow around the eyes, which became most noticeable when she was standing or lying in dim light. Daryl Hannah played Morticia in the 1998 film Addams Family Reunion. Ellie Harvie played Morticia in the revival series, The New Addams Family. In the first animated series made in 1973, Morticia was voiced by Janet Waldo. In the 1992 animated series, she was voiced by Nancy Linari. In the 2010 Broadway musical, Morticia is portrayed by Bebe Neuwirth. Brooke Shields replaced her in the role of Morticia on June 28, 2011.