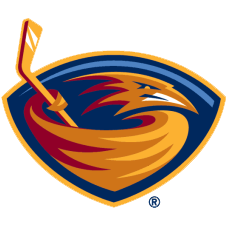 The Atlanta Thrashers are a professional team based in . They are members of the Southeast Division of the Eastern Conference of the (NHL). Since their inception, they have played their home games at . The Thrashers have qualified for the once in their seven seasons in the NHL, during the 2006-07 season.

Atlanta was awarded a NHL franchise on , . This marked a return to by the NHL. The old team departed for in 1980 and became the .

The nickname "Thrashers", after Georgia's state bird, the , was selected from a fan poll. "Thrashers" had actually been runner-up to "Flames" for Atlanta's first NHL team and , the Thrashers' new home, was built on the site of the former Omni, which had been home to the Flames.

The newly-formed Thrashers selected with the first overall selection in the . They played their first game on , , losing 4–1 to the eventual Champions, the . Captain scored the franchise's first goal in the loss.

On , , the team was sold to a group of Atlanta Spirit, LLC by , along with the 's . Atlanta Spirit consists of Bruce Levenson, Ed Pestkowitz, Rutherford Seydel, Beau Turner, Michael Gearon, Sr., Michael Gearon, Jr., Felix Riccio and . That same month brought tragedy as just five days later, star forward crashed his in a one-car accident that seriously injured him (broken and , sprained , torn ACL and MCL) and severely injured Thrashers center , who died five days later due to infection stemming from the accident. The Thrashers dedicated their in Snyder's memory. Heatley's content was far below the legal limit, but his combination of speeding (he was driving an estimated 80 ) and recklessness led to criminal charges (eventually settled with three years' probation and a penalty of community service).

Thrashers players wore black patches with Snyder's number, 37, on their jerseys. At the end of the season, Heatley requested a trade for personal reasons. Heatley was traded to Ottawa in a move that brought , a four-time 30 goal scorer at the time of the trade, to Atlanta. At the end of the 06–07 season, Hossa had made his mark as the first Thrasher to score 100 points in one season, eclipsing 's franchise record of 98 points.

The Thrashers clinched a spot in the Stanley Cup playoffs for the first time in team history in the 2006–2007 season, while also capturing the first division championship in franchise history. They were swept 4–0 in the first round of the playoffs by the New York Rangers.

Led by captain , the Thrashers jumped quickly out of the gate with some notable highlights. Ilya Kovalchuk scored eight goals in the first seven games, including two s, one in a 7–2 rout of the and another in a come-from-behind victory against the . Those comeback victories became a recurring sight throughout the season, including shocking upsets against the , the , and the , as well as wins from games against the and the .

Eleven games into the season, the Thrashers were alone in first place atop both the Southeast Division the NHL. Although they continued to play well, they could not keep up with the , the eventual champions, or other teams in the league. The absence of Heatley and a lack of depth started to appear. Boxing Day 2003 marked both a bright and dark day for the Thrash. On that day, Heatley skated for the first time since his car accident with Snyder, but it also marked the last win for the Thrashers before an extended losing streak. From to the Thrashers went a dismal 1–17–3. However, fans were entertained regardless of the team's struggles. Kovalchuk became only the second Thrashers' player to score in the (after Heatley), an exciting overtime 4–1 win against the .

While the Thrashers' playoff hopes were done for the year, they still played on and ended up finishing second in the Southeast Division and tenth in the Eastern Conference, only a handful of wins away from the playoffs. Kovalchuk ended up tying for the league lead in goals (41) with and . started his NHL career with four wins in four starts, including one shutout.

Before the start of the 2005–06 season, the Thrashers picked up many veteran players in the hopes of making the playoffs for the first time. They signed , , , , and . They traded Dany Heatley on , , to the , in a blockbuster deal for forward Marian Hossa and defenseman .

The 2005–06 season saw the Thrashers win a club-record 41 games, even with numerous goaltending injuries. Only a few minutes into the first game of the season, Lehtonen pulled his groin, an injury that would keep him out for a good portion of the season. Veteran backup Mike Dunham, an experienced number-one net minder, stepped in, but also promptly injured himself only a few games later; this left only prospects and to mind the nets. Journeyman goalie Steve Shields was signed, but he too was injured within ten games. On , Lehtonen was run into by Tampa Bay's , injuring him yet again. The remainder of the season was left to Dunham. Garnett was injured in a game against the . Dunham, who had started the game but was relieved by the young after poor play, was forced back into action in the third period.

, , the first official event on the new was a game between the Atlanta Thrashers and the . The Thrashers ended up losing 4–3, giving the Hurricanes their first win of the season. On , , team captain Scott Mellanby announced his retirement. On , coach Bob Hartley was fired after an 0–6 start.

, , The NHL All-Star Game was played for the first time in Philips Arena matching the Eastern Conference All-Stars vs. the Western Conference All-Stars with the East winning 8–7 on former Thrasher Marc Savard scoring the game winner late in the 3rd period. Savard spurned Atlanta for a 2–year deal with Boston after the 2005–06 season but was cheered on by the crowd the entire night. The game was originally scheduled for the 2004–05 season but due to the lockout, 2008 was the next available date.

The current team colors are ice blue, navy blue, red, and gold. In 2003, the NHL decided to switch home and road jerseys. In 2007, Reebok came out with the new jerseys. It is now called a RBK EDGE jersey, and the piping has only changed for the Thrasher's jerseys. [cite web|url=http://www.statenews.com/article.phtml?pk=15112|title=NHL 'quacked' up with hockey jersey switch|first=Kristofer|last=Karol|publisher=|date=2003-01-27|accessdate=2006–08–30] Atlanta unveiled its new third jersey, red with white and gold trim on October 10, 2008. [cite web|url=http://thrashers.nhl.com/team/app/?service=page&page=NewsPage&articleid=385554|title=Thrashers Unveil Third Jerseys|date=2008-10-08|accessdate=2008-10-10, including a photo timeline of Thrashers jerseys.]

The team's mascot is Thrash, a .

"This is a partial list of the last five seasons completed by the Thrashers. For the full season-by-season history, see "

The Atlanta Thrashers are broadcast on on , which is available in many states. Until , , SportSouth was known as . In 2006-07, the channel will broadcast about 75% of the team's schedule. Outside of the league's contract with , the team has no broadcast (over-the-air) TV contract; thus, games are only available on television to fans with cable or satellite.

Radio coverage includes of all games on 680 The Fan -- an AM sports station in Atlanta. The station is the flagship of a network that includes 18 stations. Most are in Georgia, but there are two affiliates in and one in .