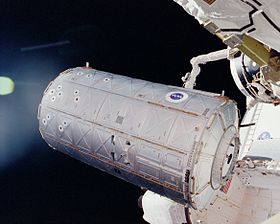 The Destiny Laboratory Module (NASA) being installed on the International Space Station.
See also: Scientific research on the ISS

The Destiny module is the primary operating facility for U.S. research payloads aboard the International Space Station (ISS).[1][2] It was berthed to the Unity module and activated over a period of five days in February, 2001.[3] Destiny is NASA's first permanent operating orbital research station since Skylab was vacated in February 1974.

The Boeing Company began construction of the 16 ton (14.5 tonne), state-of-the art research laboratory in 1995 at the Marshall Space Flight Center in Huntsville, Alabama.[1] Destiny was shipped to the Kennedy Space Center in Florida in 1998, and was turned over to NASA for pre-launch preparations in August 2000. It launched on February 7, 2001 aboard the Space Shuttle Atlantis on STS-98.[3]

Astronauts work inside the pressurized facility to conduct research in numerous scientific fields. Scientists throughout the world will use the results to enhance their studies in medicine, engineering, biotechnology, physics, materials science, and Earth science.[2] 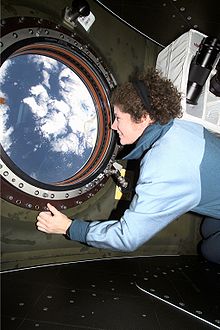 The aluminum U.S. laboratory module is 28 feet (8.5 m) long and 14 feet (4.3 m) wide.[1][2] It comprises three cylindrical sections and two endcones that contain the hatch openings through which astronauts enter and exit the module.[1] The aft port of Destiny is connected to the forward port of the Unity node, and the forward port of Destiny is connected to the aft port of the Harmony module.[4][5] A 20-inch (510 mm)-diameter window is located on one side of the center module segment.[2]

Each of the two berthing ports on Destiny contains a hatch.[2] Both hatches are normally open, and remain open unless a situation arises requiring a module to be isolated. Each hatch has a window. The hatches can be opened or closed from either side. The hatches have a pressure interlock feature, which prevents the hatch from being opened if there is a negative pressure across the hatch (higher pressure on the outside of the hatch).

Destiny has a 20-inch (510 mm) optically pure, telescope-quality glass window located in an open rack bay used primarily for Earth science observations.[1][2][6] Station crewmembers use very high quality video and still cameras at the window to record Earth's changing landscapes. A window shutter protects the window from potential micrometeoroid and orbital debris strikes during the life of the ISS. The crew manually opens the shutter to use the window.

Imagery captured from Destiny's window has given geologists and meteorologists the chance to study floods, avalanches, fires and ocean events such as plankton blooms in a way never seen before, as well as given international scientists the opportunity to study features such as glaciers, coral reefs, urban growth and wild fires.[2]

The Destiny laboratory as it looked following installation in 2001.

Astronaut Kenneth Cockrell, STS-98 commander, emerges from behind a rack curtain in Destiny.

Destiny arrived at the station pre-configured with five racks housing electrical and life support systems that provide electrical power, cooling water, air revitalization, and temperature and humidity control. Seven additional racks were flown to Destiny in the Leonardo Multi-Purpose Logistics Module by STS-102, and ten more were delivered on subsequent missions. Destiny can hold up to 13 payload racks with experiments in human life science, materials research, Earth observations and commercial applications.[2] The laboratory has a total of 24 racks inside the laboratory, six on each side.[1]

As with the European and Japanese laboratories of the station, payloads inside Destiny are configured around International Standard Payload Racks (ISPRs), that can be removed or reconfigured for various experiments and equipment.[6] Made out of a graphite composite shell, each rack weighs about 1,200 pounds (540 kg), and is about 73 inches (1,900 mm) high, and 42 inches (1,100 mm) wide.[6] The eight rack bays are equipped with curtains that provide around 290 cubic feet (8.2 m3) of temporary stowage space when not occupied by experiments.[6]

Internal to the laboratory are racks, rack stand-offs, and vestibule jumpers.[7] The lab racks house the system hardware in removable modular units. The stand-offs provide space for electrical connections, data management systems cabling for computers, air conditioning ducts, thermal control tubes and more, all of which support the space station's equipment racks.[7] The racks interface to the piping and wiring in the standoff via outlets and ports located in the standoffs at the base end of each rack location.

Jumpers in the vestibule, the area between Unity and Destiny, connect the piping and wiring between the two. Grounding straps between Unity and Destiny will be installed. One side of the grounding strap will be connected to the Active Common Berthing Mechanism (ACBM) on Unity, while the other end will be connected to the Passive Common Berthing Mechanism (PCBM) on Destiny.

Destiny also contains the Minus Eighty Degree Laboratory Freezer for ISS (MELFI), transported to the Space Station on STS-121.[8] The freezer is used both to store samples and reagents on the station, and to transport them to and from the space station in a temperature controlled environment.[9]

Currently installed at the main observation window of Destiny is the Agricultural Camera (AgCam). It is a multi-spectral imaging system built and primarily operated by students and faculty at the University of North Dakota. Its purpose is to take frequent images, in visible and infrared light, of vegetated areas on the Earth and promises to deliver a greater effectiveness for in-season agriculture applications research and operational decision support than current satellite systems such as Landsat.[10]