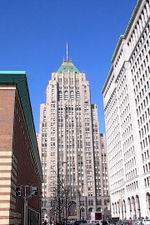 The Fisher Building, a National Historic site in the City's New Center area, is home to the Fisher Theatre, with the WJR radio antenna

As the world's traditional automotive center, Detroit, Michigan is an important source for business news. The Detroit media are active in the community through such efforts as the Detroit Free Press high school journalism program and the Old Newsboys' Goodfellow Fund of Detroit. Wayne State University offers a widely respected journalism program.

The daily newspapers serving Detroit are the Detroit Free Press and The Detroit News, both broadsheet publications that are published together under a joint operating agreement. The Detroit Free Press is the third largest circulating daily newspaper owned by the Gannett Company, after USA Today and The Arizona Republic. The Detroit News is owned by MediaNews Group. Other publications include weekly alternative media piblications The Metro Times, Real Detroit Weekly, and Crain's Detroit Business, the weekly Michigan Chronicle (the state's largest African American owned newspaper) and the Michigan Citizen. Crain Communications is headquartered in Detroit. Hour Media, headquartered in the Detroit area, publishes Hour Detroit monthly magazine as well as Detroit Home, Metro Detroit Bride and DBusiness magazines, and numerous custom publications. Other newspapers include the Detroit Independent and the Detroit Monitor. The Windsor Star from Windsor, Ontario also sees some circulation in Downtown Detroit.

In Play! Magazine magazine serves as SE Michigan's most read sports publication covering the four professional sports teams as well as the University of Michigan and Michigan State athletics.

Wintergarden was turned into a makeshift studio for ESPN during their Super Bowl XL coverage.

The Detroit television market is the 11th largest in the United States;[1] and it has additional viewers in Ontario, Canada (Windsor and its surrounding area on broadcast and cable).

As a result of the many Canadian viewers within broadcast range of the Detroit television signals, the stations within Detroit consider them as part of their primary audience (such as WMYD and WTVS). News-wise, WDIV-TV and WJBK include the Canadian communities in Essex, Chatham-Kent, and Lambton Counties within their weather portions, with WJBK even granting the Ontario viewers equal prominence to the other Michigan communities in their county-by-county forecasts. In the past few years, the Detroit stations have also been stepping up their coverage of border-related and Windsor-related news as well.

Detroit has the ninth largest radio market in the United States,[2] this ranking does not take into account Canadian audiences. The primary AM stations are WWJ 950 (news, CBS radio), WJR 760 (news-talk, Clear Channel), WDFN 1130 (sports), WXYT-"The Ticket" 1270 (sports-talk, simulcast on 97.1 FM, CBS radio), WCHB 1200 (urban gospel music and talk, Radio One) and WDTW 1310 (progressive talk). Radio Disney broadcasts in Detroit on AM 910. Religious station "The Word" WRDT broadcasts from Monroe/Detroit on 560 AM; WDTK 1400, owned by Salem Communications broadcasts Conservative talk, and its sister station WLQV 1500 broadcasts Christian talk and teaching. Contemporary Christian music is available during some weekday dayparts on WRDT's sister station, WMUZ-FM; on Family Life Radio's daytime-only WUFL-AM; and on various low-power repeaters around the area of the K-Love and Smile FM networks.

WDET 101.9 FM is the city's NPR station and broadcasts from Wayne State University. However, WDET is outperformed in the Arbitron ratings by WUOM 91.7 from Ann Arbor, the flagship station of the Michigan Radio network. Also, WEMU 89.1, an NPR station specializing in jazz, broadcasts from Eastern Michigan University in Ypsilanti.

Many Windsor radio stations such as CIMX-FM 88.7, CIDR-FM 93.9, CKLW 800, CKWW 580, CBEF 540, CBEW-FM 97.5 and CBE-FM 89.9 can be heard in the Detroit area, as can AM and FM stations from neighboring cities such as Leamington, Chatham, and Sarnia. In fact, CKLW broadcasts University of Michigan football games. For much of the 1960s and 1970s, CKLW was known as "The Big 8" and was the most popular Top 40 radio station in Detroit, and one of the most popular in North America, until the Canadian federal government passed cancon laws in the 1970s, mandating a percentage of Canadian content broadcasting. CTVglobemedia (owners of CIMX, CIDR, CKWW and CKLW) maintains a sales office in suburban Detroit in addition to the chief studios in Windsor.

WRCJ-FM 90.9 is a recent addition, providing the only local fulltime source of fine-arts programming (classical and jazz). Classical music can also be heard on some smaller high-school and college-owned stations with limited coverage. CBC Radio 2 (CBE-FM 89.9 in Windsor) plays classical music besides offering news and talk-radio programming, as do out-of-town NPR affiliates in East Lansing (WKAR-FM 90.5) and Toledo (WGTE-FM 91.3) which can be heard in parts of the area.

Detroit has a rich history in radio broadcasting. In addition to CKLW, other popular and influential radio stations in Detroit during the 1960s and 1970s included WKNR-AM "Keener 13" (now WDTW-AM), which was the leading exponent of the Motown Sound at its peak in the mid-1960s, and WABX-FM (now WYCD), which helped define the progressive rock sound of the late 1960s. Nationally known broadcasters such as Casey Kasem, Joey Reynolds, J.P. McCarthy, Tom Clay, Charlie Van Dyke, Tom Shannon, The Electrifyin' Mojo, and Terry "Motormouth" Young have all worked in Detroit radio at one time or another. Dick Purtan was a morning-drive fixture in the Motor City for over four decades, lastly at WOMC-FM, and recently retired WWJ-AM meteorologist Sonny Eliot was a former Detroit TV weatherman known for his forecasts filled with colorful phrases.

Radio stations to the north of Metro Detroit lie in the Thumb Area Radio Region. Some of these stations rank in Arbitron's Detroit market, as do stations from Ann Arbor, Toledo, and sometimes Flint and Lansing.

Traffic Reporting has been a primary focus in the Detroit area dating back as far as 1978. Radio station CKLW helped with producing the concept of traffic reporting used in Detroit early on. These reporting services are now primarily handled by a small variety of broadcasting companies, and distributed through various media: radio, television, the Internet, and more recently through cell phones, in-vehicle navigations devices, and satellite radio (Sirius/XM). The larger companies having a direct presence in the Detroit market include Westwood One, Traffic.com, and Clear Channel Communications. They have established affiliate relations with most of the radio and television stations in the Detroit market to produce daily on-air traffic reports.

Traffic.com focuses primarily on the technology aspect of traffic reporting by producing traffic information for the Internet, radio, and television.

Most of these broadcasting companies also have working relationships with the local Department of Transportation (DOT), local and state police, and government agencies to gather and distribute traffic information through the various media listed above.