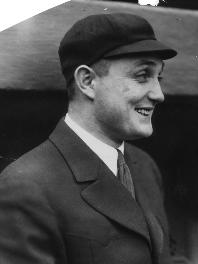 William George Evans ( &ndash; ), nicknamed "The Boy Umpire," was an American umpire in who worked in the from 1906 to 1927. He became, at age 22, the youngest umpire in major league history, and later became the youngest to officiate in the at age 25.

Upon his retirement at age 43, his 3,319 career games ranked fifth in major league history; his 1,757 games as a home plate umpire ranked third in AL history, and remain the eighth most by a major league umpire. He later became a key front office executive for three teams and president of the minor league .

In addition to his inside role in the sport, Evans authored countless articles,

Evans was born in . When he was still a child, he relocated with his family to , where his Welsh-born father became superintendent at a Carnegie steel plant.

In the early 1900s, while covering a baseball game between the club and a team from , Evans was approached by the manager of the local club, ex-major leaguer , and asked to fill an umpire vacancy. According to Evans's obituary, the young reporter, who was on a date with a young woman, "wasn't interested until Hogan mentioned he would be paid $15 a week for officiating the game", a figure equivalent to a week's salary at his sportswriting job.

Evans' ability caught the attention of , president of the , and he was offered a full-time position as a league umpire. Evans accepted the job, on the condition that he could retain his position as a sportswriter. In 1906, he received a spectacular career boost from fellow Youngstowner , an ex-major leaguer who was so impressed with the young man's ability that he recommended Evans to president . This gesture enabled Evans to move from a Class C Division minor league club to the major leagues.

At 22 years of age, Evans was the youngest umpire in major league history; furthermore, he was among those very rare umpires who broke into the major leagues with little previous professional experience.

Unlike many umpires, Evans never made claims to infallibility. "I missed a lot of decisions", he once said. "At the time of making such a decision there was no doubt in my mind as to its correctness. However, a second or two later I felt that I erred and wished I could change my original ruling". Evans' humility and impartiality did not always protect him from abusive fans. As sports writers Daniel Okrent and Steve Wulf observed, "roughness on the field seemed to elicit the same in the stands".

Evans became known as an innovator during more than two decades with the American League. One obituary observed that he "introduced something new to officiating by running down to a base where a play was made so that he would be on top of it". This approach became a standard practice among major league officials. He was also aware of the increasing demands placed on umpires and strongly advocated formal training for baseball officials. Furthermore, in a game that retained much of the rough-and-tumble atmosphere of earlier decades, Evans "substituted diplomacy for belligerency and proved an arbiter could control a game without threats of physical violence".

At the same time, he was unwilling to "back down" when physically threatened. In September 1921, Evans was involved in a bloody fistfight with , who contested one of Evans' calls. Baseball historian David Anderson noted that the trouble began when Cobb threatened to "whip" Evans "right at home plate", a move that would have led to Cobb's immediate suspension. Evans supposedly invited Cobb to the umpire's dressing room for "post-game festivities", and before long, the two men were brawling beneath the stands as players from both teams looked on. According to some accounts, many of Cobb's teammates "rooted" for Evans. After the fight, Cobb was suspended for one game, while Evans attended the next several games wearing bandages. Both men had agreed before the fight that they would not report it to league officials, but word of the incident eventually reached the league president, Ban Johnson.

For the duration of his career as an umpire, Evans also remained active as a sportswriter. From 1918 to 1928, he served as sports editor of Newspaper Enterprise Association and produced a syndicated sports column titled, "Billy Evans Says".

Evans retired from umpiring following the 1927 season to become the general manager of the , earning a substantial annual salary of $30,000. Baseball historian observed that Evans was the first front-office executive of a major league team to be officially called a "general manager".

Shifting sports, Evans returned to Cleveland to become general manager of the Cleveland Rams for the 1941 season. Although the team struggled on the field, it was a financial success, but after failing to come to terms on a new contract, Evans left and spent the next year writing before accepting the position of league president of the on , .

During his four years leading the league, the Association thrived despite many other leagues shutting down due to . In his first year, attendance increased by nearly 300,000,Fact|date=December 2007 and while it dipped slightly in 1944, the threshold of one million people attending league games was again reached the following year. [cite book |last=Spink |first=J. G. Taylor (ed.) |authorlink=J. G. Taylor Spink |title=Baseball Guide and Record Book 1946 |year=1946 |publisher= |location=St. Louis |pages=p. 189 |chapter=Attendance Figures for 1945 ]

On , , Evans accepted a contract offer from the Detroit Tigers to become their general manager.

Despite long absences from his residence in Cleveland, Evans was known as a devoted husband and father. He married the former Hazel Baldwin in 1908; the couple had one child, Robert, who became the sports director of a radio station in . Evans maintained close ties with family members and died while visiting his son in Miami.

Despite his success, Evans remained accessible to friends from his early days in Youngstown. Shortly after Evans' death, a former high school classmate, E. Allan Lightner, recalled that his late friend "was still the fine clean character that he was in his high school days in Youngstown". Lightner recalled that, shortly after his final conversation with the retired umpire, Evans sent Lightner an autographed photo of himself with former Detroit Tigers manager .

By 1952, Evans had unofficially retired, then was injured in an automobile accident in . After recovering, he remained in good health until , when he suffered a massive while visiting his son. Evans died two days later at the age of 71. Funeral services were held in Cleveland. Evans' remains were interred at Knollwood Cemetery, in , Ohio.

Evans' contributions to baseball have been widely recognized. In 1973, he became the third umpire elected to the Baseball Hall of Fame.