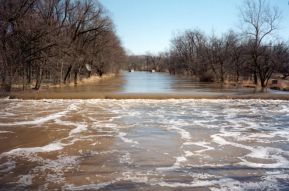 There are two Eel Rivers in . Both are tributaries of the . One flows through Cass, Miami, Wabash, Kosciusko, Whitley, and Allen Counties and was historically called "Ke-na-po-co-mo-co". The other flows through Greene, Owen, Clay, Putnam, and Parke Counties and flows into the White River which is a tributary of the Wabash.

Called "Ke-na-po-co-mo-co" or "river of the snake fish" [Winger, Otho, "The Ke-Na-Po-Co-Mo-Co: (Eel River): The Home of Little Turtle", North Manchester, 1934, p. 3. The author, a professor of history at Manchester College, notes that the original form of the word was "Kenapekwamakwah". In another volume, the author notes that the name is Miami in origin. Winger, "The Potawatomi Indians", Elgin, IL: Elgin Press, 1939, p. 63.] by native Americans, the Eel River is a of the Wabash River in Indiana. It was later called the L'Anguille River. It rises southeast of Huntertown in Allen County and flows southwest 110 miles to join the Wabash at Logansport in Cass County.

Originating as an "ice-marginal channel" at the edge of the retreating Saginaw Lobe of the Wisconsin Glacier, the Eel River was later buried by the 's advancing Erie Lobe. [ [http://www.in.gov/dnr/water/files/pg24-57.pdf "Water Resource Availability in the Maumee River Basin, Indiana", Water Resource Assessment 96-5, Indianapolis:Indiana Department of Natural Resources, Division of Water, 1996, p. 46.] ] As the Erie Lobe retreated, the Eel formed a single stream with what is now upper Cedar Creek in DeKalb and Allen counties. This ancestral Eel River was also fed by glacial meltwater surging under the ice from the southeast through a "tunnel valley" known today as Cedar Creek Canyon. ["Id.", p. 47. ] Blockage of the Eel's channel by outwash from the canyon and a decline in the volume of meltwater forced the upper Eel to change course into the canyon, creating today's Cedar Creek. ["Id."] This is a classic example of "stream piracy" that shifted almost 175,000 acres (708 km²) of land from the Eel-Wabash watershed to that of the St. Joseph-Maumee. [ "Id.", p. 47; [http://www.in.gov/dnr/water/files/pg58-122.pdf p. 121.] ]

Before the United States consolidated its hold on the , the Eel formed a rough boundary between the tribe on the north and the Miami tribe on the south. [Winger, "The Potawatomi", pp. 63-64.] During the Revolutionary War, a Continental force under Auguste Mottin de la Balme, who planned to seize a British trading post on the Eel near present-day Columbia City, was destroyed by the Miami under Chief , also known as Little Turtle. [ Winger, "The Ke-Na-Po-Co-Mo-Co", pp. 5-6.] On , , Michikinikwa's warriors surprised and virtually annihilated a U.S. force under Colonel John Hardin in the Eel bottomlands southeast of present-day Churubusco. [ Winger, "The Ke-Na-Po-Co-Mo-Co", pp. 4-5.] In , the Eel was the scene of yet another battle, when General destroyed the Miami town of Kenapacomaqua six miles upstream from present-day Logansport. [ [http://books.google.com/books?id=8rHUiMGfIqQC&printsec=titlepage Barce, Elmore, "The Land of the Miamis", Fowler, IN: The Benton Review Shop, 1922, pp. 188-194.] Wilkinson's account of this expedition is found at [http://www.gbl.indiana.edu/archives/dockett_317/317_36h.html Indiana University, Glenn Black Laboratory, American State Papers, Indian Affairs, March 3, 1789 to March 3, 1815, vol. 1, p. 134.] Another account is found in [http://books.google.com/books?id=mwNFAAAAMAAJ&printsec=titlepage James Handasyd Perkins and John Mason Peck, "Annals of the West" (1857) pp. 569-570.] Known locally as the , Wilkinson's raid is also described at [http://incass-inmiami.org/cass/cemeteries/abnd/olde_towne] on the USGenWeb site.] In September , Colonel James Simrall, acting under orders from General , ravaged Miami farms and villages along the Eel in present-day Whitley County, defeating a Miami force that stood and fought. [ Winger, "The Ke-Na-Po-Co-Mo-Co", p. 9. "See also" [http://www.hmdb.org/marker.asp?marker=1335 Historical Marker Database: Eel River Battlefield War of 1812] ]

:"Johnny Shawnessy probably had a better guess about the river's name than anyone else as he was the only person in the County for years who made any research into the Indian culture. He finally decided that the river's name was related to the Indian word "Shakamak," meaning long fish or eel. There was a Shakamak River in southern Indiana; and in the northern part of the state, an Eel River, which in the Miami tongue had been called the Kenapocomoko, or River of Snake Fish."

:"The only drawback to Johnny's theory was the fact that he never found an eel in the Shamucky River."

The other Eel River in Indiana flows from its head near New Brunswick in Boone County. It runs generally south and slightly west for most of its course until it takes a southeast turn about 4 miles west of Martz. It then flows about 18 miles to its junction with the White River near Worthington. One of its tributaries, Big Walnut Creek, has a drainage basin of 318 square miles. Another tributary is Mill Creek which flows into Cagles Mill Lake, also known as , before joining the Eel.