She was initially signed at age 16 by Warner Bros., but her career got off to a slow start. When her contract was not renewed, Metro-Goldwyn-Mayer (MGM) gave her a small, but significant part in the film Three Little Words (1950), then signed her to a seven-year contract. In her next film, Two Weeks with Love (1950), she had a hit with the song "Aba Daba Honeymoon". However, it was her first leading role, in Singin' in the Rain (1952), that set her on the path to fame. By the mid 1950s, she was a major star. Other notable successes include Tammy and the Bachelor (1957), in which her rendition of the song "Tammy" reached number one on the music charts, and The Unsinkable Molly Brown (1964), for which she received a nomination for the Academy Award for Best Actress. She continues to perform successfully on stage, television and film to the present day.

Her personal life has not gone as well. Her first marriage, to popular singer Eddie Fisher, produced a son and a daughter, actress/author Carrie Fisher, but ended in divorce in 1959 when Fisher and her former (and later) friend Elizabeth Taylor fell in love. Her second and third marriages also ended disastrously, each time ruining her financially.

She is a noted collector of film memorabilia, beginning with the landmark 1972 MGM auction. In June 2011, unable to find a suitable home for her large collection, she began auctioning it off.

She was born Mary Frances Reynolds in El Paso, Texas, the second child of Maxine N. (née Harmon; 1913–1999) and Raymond Francis Reynolds (1903–1986), who was a carpenter for the Southern Pacific Railroad.[1][2] Her parents were of Irish ancestry.[3] Reynolds was a Girl Scout and a troop leader (a scholarship in her name is offered to high-school age Girl Scouts). Her family moved to Burbank, California, in 1939, and she was raised in a strict Nazarene faith. At age 16, while a student at Burbank's John Burroughs High School, Reynolds won the Miss Burbank Beauty Contest, a contract with Warner Bros., and acquired a new first name. 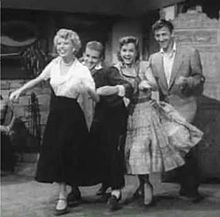 (From left) Barbara Ruick, Bob Fosse, Reynolds and Bobby Van in The Affairs of Dobie Gillis (1953).

Reynolds regularly appeared in movie musicals during the 1950s and had several hit records during the period. Her song "Aba Daba Honeymoon" (featured in the film Two Weeks with Love (1950) as a duet with Carleton Carpenter) was a top-three hit in 1951. Her most high-profile film role was in Singin' in the Rain (1952) as Kathy Selden. In Bundle of Joy (1956) she appeared with her then-husband, Eddie Fisher.

Her recording of the song "Tammy" (from her film Tammy and the Bachelor (1957)) earned her a gold record,[4] and was the best-selling single by a female vocalist in 1957. It was number one for five weeks on the Billboard pop charts. In the movie (the first of the Tammy film series), she co-starred with Leslie Nielsen.

In 1959, Reynolds recorded her first album for Dot Records, simply called Debbie, which included her own selection of twelve standards including "S’posin'", "Moonglow," "Mean To Me" and "Time After Time." Bing Crosby paid tribute to Reynolds in the sleeve notes accompanying the album thus:

Someone recently said, and with reasonable accuracy I would think, that good singers make good actors. Evidence in support of this belief is available in the recent performances of Sinatra and Martin, for instance, but I would like to put forth also the proposition that the reverse is quite true: good actors make good singers. Assuming they can carry a tune. We all know that Debbie is better than a good actress — she’s VERY good, and we all know she can sing with a lilt and a listenable quality that’s genuinely pleasant and agreeable. Witness “Tammy”. It was small surprise to me then that when I listened to this beautiful album she has etched for Dot, I found myself captivated and enchanted. Quite obviously Debbie had spent a great deal of time selecting the songs to be included, because she’s made them her own, and invested them with a sincerity that’s inescapable — of contrasting moods to be sure, but the moods are there, and to me, mighty effective. And that, mes amis, is artistry.

Reynolds also scored two other top-25 Billboard hits with "A Very Special Love" (1958) and "Am I That Easy to Forget" (1960) — a pop-music version of a country-music hit made famous by both songwriters Carl Belew (in 1959), Skeeter Davis (in 1960), and several years later by singer Engelbert Humperdinck. She has released several albums of both her vintage performances and her later recordings.

During these years, she also headlined in major Las Vegas showrooms.

Her starring role in The Unsinkable Molly Brown (1964) led to a nomination for the Academy Award for Best Actress. She then portrayed Jeanine Deckers in The Singing Nun (1966).

In what Reynolds has called the "stupidest mistake of my entire career",[5] she made headlines in 1970 after instigating a fight with the NBC television network over cigarette advertising on her eponymous television series; NBC cancelled the show.[5]

Reynolds continues to make appearances in film and television. She played Helen Chappel Hackett's mother, Deedee Chappel, on an episode of "Wings" entitled, "If It's Not One Thing, It's Your Mother," which originally aired on November 22, 1994.[6] From 1999 to its 2006 series finale, she played Grace Adler's ditzy mother, Bobbi Adler, on the NBC sitcom Will & Grace (1998–2006), which earned her an Emmy Award nomination for Outstanding Guest Actress in a Comedy Series in 2000. She also plays a recurring role in the Disney Channel Original Movie Halloweentown film series as Aggie Cromwell. Reynolds made a guest appearance as a presenter at the 69th Academy Awards in 1997.

Reynolds appeared in her West End show Debbie Reynolds: Alive and Fabulous. In June 2010, her publicist Edward Lozzi secured her a role as a regular columnist for the weekly paper Globe, replacing Ivana Trump in answering reader queries. [2]

Reynolds won the National Board of Review Award for Best Supporting Actress for her role in The Catered Affair (1956).

Her foot and hand prints are preserved at the Grauman's Chinese Theatre in Hollywood, California. She also has a star on the Hollywood Walk of Fame at 6654 Hollywood Boulevard.

In November 2006, Reynolds received the "Lifetime Achievement Award" from Chapman University (Orange, California). On May 17, 2007, she was awarded an honorary degree of Doctor of Humane Letters from the University of Nevada, Reno, (Reno, Nevada) where she had contributed for many years to the film-studies program. In her acceptance speech, she referred to the University as "Nevahda...Arizona".[citation needed]

Reynolds has amassed a large collection of movie memorabilia, beginning with the landmark 1970 Metro-Goldwyn-Mayer auction, and displayed them, first in a museum at her Las Vegas hotel and casino during the 1990s and later in a museum close to the Kodak Theater in Los Angeles. On several occasions, she has auctioned off items from the collection.

The museum was to relocate to be the centerpiece of the Belle Island Village tourist attraction in the resort city of Pigeon Forge, Tennessee, but the developer went bankrupt.[7][8] The museum itself filed for Chapter 11 bankruptcy[9] in June 2009.[7]

Todd Fisher, Reynolds' son, announced that his mother was "heartbroken" to have to auction off her collection.[7] It was valued at $10.79 million in the bankruptcy filing.[8] The Vancouver Sun reported that Profiles in History has been given the responsibility of conducting a series of auctions beginning in June and continuing into December 2011.[10] Among the "more than 3500 costumes, 20,000 photographs, and thousands of movie posters, costume sketches, and props" to be sold are Charlie Chaplin's bowler hat and Marilyn Monroe's white "subway dress", whose skirt is lifted up by the breeze from a passing subway train in the film The Seven Year Itch (1955).[10]

On June 18, 2011, the subway dress was sold for $4.6 million dollars, far in excess of pre-auction estimates of $1-2 million.[11] Another Monroe dress, which she wore in Gentlemen Prefer Blondes, fetched $1.2 million, four times the upper pre-sale expectation.[11]

Reynolds has been married three times.

She and Eddie Fisher were married in 1955. They are the parents of Carrie Fisher and Todd Fisher. A public scandal ensued when Fisher and Elizabeth Taylor fell in love following the death of Taylor's then-husband Mike Todd, and Reynolds and Fisher were divorced in 1959. In 2011, first on the Oprah show only weeks before Elizabeth Taylor's death from congestive heart failure, Reynolds explained that she and Taylor happened to be traveling on the ocean liner "Queen Elizabeth" at the same time when they made up. Debbie sent a note to Taylor's room, and Taylor sent a note in reply asking to have dinner with Debbie and end their feud. The two reconciled, and, as Debbie put it, "...we had a wonderful evening with a lot of laughs". Reynolds said of Taylor in an interview with Popeater that "[Elizabeth] went through her younger years of just obtaining what she wanted, and later in life she became a little more aware of other people's feelings" and also said of her legendary friend, "Elizabeth worked really hard all of her life and she raised her children really well. She worked really hard for HIV; I've worked hard for mental health. We both feel we've done our job and our commitment to the community" and "I'm very sorry for Elizabeth's passing. She was the most glamorous star of our generation, and women liked her and men adored her, including my husband [Fisher]. She was a symbol of stardom and her legacy will go on forever".

Her second marriage, to millionaire businessman Harry Karl, lasted from 1960 to 1973. He was previously married to Marie McDonald. At its end, she found herself in financial difficulty because of Karl's gambling and bad investments.

Reynolds was married to real estate developer Richard Hamlett from 1984 to 1996. They purchased Greek Isles Hotel & Casino, a small hotel and casino in Las Vegas, but it was not a success. In 1997, Reynolds was forced to declare bankruptcy.[12]

Reynolds has been active in the Thalians Club, a charitable organization.

She resides in Beverly Hills next door to her daughter Carrie.

In keeping with the celebrity tradition of the Shenandoah Apple Blossom Festival of Winchester, Virginia, Reynolds was honored as the Grand Marshal of the 2011 ABF that took place from April 26 to May 1, 2011.[13]