Confederated Salish and Kootenai Tribes of the Flathead Nation 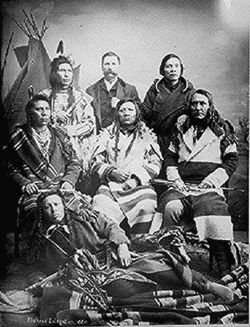 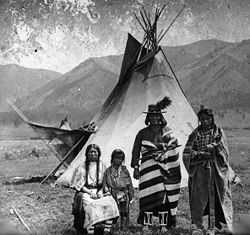 The Confederated Salish and Kootenai Tribes of the Flathead Reservation are the Bitterroot Salish, Kootenai and Pend d'Oreilles Tribes. The Flatheads lived between the Cascade Mountains and Rocky Mountains. The Salish (Flatheads) initially lived entirely east of the Continental Divide but established their headquarters near the eastern slope of the Rocky Mountains. Occasionally hunting parties went west of the Continental Divide but not west of the Bitterroot Range. The easternmost edge of their ancestral hunting forays were the Gallatin, Crazy Mountain, and Little Belt Ranges.

They were called the Flathead Indians by the first white men who came to the Genesse River. The name is often said to derive from the flat head produced by binding infants' skulls with boards. However, this is mistaken folk etymology, as the tribes never practiced head flattening. In fact, the Salish were called "flat head" precisely because the tops of their heads were not distorted, as were those of neighboring tribespeople who practiced vertical head-binding. The sign language used by neighboring tribes to distinguish the Flatheads consisted of "pressing each side of the head" with the hands. The Flatheads call themselves Salish meaning the people.

The first written record of the tribes is from their meeting with the Lewis and Clark Expedition (September 5, 1805). Lewis and Clark came there and bought horses but eventually ate the horses due to starvation. The Flatheads also appear in the records of the Catholic Church at St. Louis to which they sent four delegations to request missionaries (or "Black Robes") to minister to the tribe. Their request was finally granted and a number of missionaries including Pierre-Jean De Smet, S.J., were eventually sent. The flatheads are also located in Sula, Montana (United States, North America).

The tribes negotiated the Hellgate treaty with the United States in 1855. From the start, treaty negotiations were plagued by serious translation problems. A Jesuit observer, Father Adrian Hoecken, said that the translations were so poor that "not a tenth of what was said was understood by either side". But as in the meeting with Lewis and Clark, the pervasive cross-cultural miscommunication ran even deeper than problems of language and translation. Tribal people came to the meeting assuming they were going to formalize an already-recognized friendship. Non-Indians came with the goal of making official their claims to native lands and resources. Isaac Stevens, the new governor and superintendent of Indian affairs for Washington Territory, was intent on obtaining cession of the Bitterroot Valley from the Salish. Many non-Indians were already well aware of the valley's potential value for agriculture and its relatively temperate climate in winter. Due to the resistance of Chief Victor (Many Horses), Stevens ended up inserting into the treaty complicated (and doubtless poorly translated) language that defined the Bitterroot Valley south of Lolo Creek as a "conditional reservation" for the Salish. Victor put his X mark on the document, convinced that the agreement would not require his people to leave their homeland. No other word came from the government for the next fifteen years, so the Salish assumed that they would indeed stay in their Bitterroot Valley forever.

After the 1864 gold rush in newly established Montana Territory, pressure upon the Salish intensified from both illegal non-Indian squatters and government officials. In 1870, Victor died, and he was succeeded as chief by his son, Chief Charlot (aka Charlo, Claw of the Little Grizzly). Like his father, Charlot adhered to a policy of nonviolent resistance. He insisted on the right of his people to remain in the Bitterroot Valley. But territorial citizens and officials thought the new chief could be pressured into capitulating. In 1871, they successfully lobbied President Ulysses S. Grant to declare that the survey required by the treaty had been conducted and that it had found that the Jocko (Flathead) Reservation was better suited to the needs of the Salish. On the basis of Grant's executive order, Congress sent a delegation, led by future president James Garfield, to make arrangements with the tribe for their removal. Charlot ignored their demands and even their threats of bloodshed, and he again refused to sign any agreement to leave. U.S. officials then simply forged Charlot's X onto the official copy of the agreement that was sent to the Senate for ratification.

Over time, the real reason for the Hellgate treaty meetings became clear to the Salish and Pend d'Oreille people. Under the terms spelled out in the written document, the tribes ceded to the United States more than twenty million acres (81,000 km²) of land and reserved from cession about 1.3 million acres (5300 km²), thus forming the Jocko or Flathead Indian Reservation. Conditions had become intolerable for the Salish by the late 1880s, after the Missoula and Bitter Root Valley Railroad was constructed directly through the tribe's lands, with neither permission from the native owners nor payment to them. Charlot finally signed an agreement to leave the Bitterroot Valley in November 1889. Inaction by Congress, however, delayed the removal for another two years, and according to some observers, the tribe's desperation reached a level of outright starvation. In October 1891 a contingent of troops from Fort Missoula forced Charlot and the Salish out of the Bitterroot and roughly marched the small band sixty miles to the Flathead Reservation.

The three main tribes moved to the Flathead Reservation were the Bitteroot Salish, Pend d'Oreille, and Kootenai. The Bitterroot Salish and the Pend d'Oreille tribes spoke dialects of the same Salish language.

A dispute over off-reservation hunting between a band of Pend d'Oreilles and the state of Montana's Fish and Game department resulted in the Swan Valley Massacre of 1908.

The tribes own and jointly operate a valuable hydropower dam called Kerr Dam as well as the Best Western KwaTaqNuk Inn in Polson, county seat of Lake County and most populous community on the reservation.

The peoples of these tribes originally lived in the areas of Montana, parts of Idaho, British Columbia and Wyoming. The original territory comprised about 22 million acres (89,000 km²) at the time of the 1855 Hellgate Treaty.

The Flathead Reservation in northwest Montana is over 1.3 million acres (5,300 km²) in size.