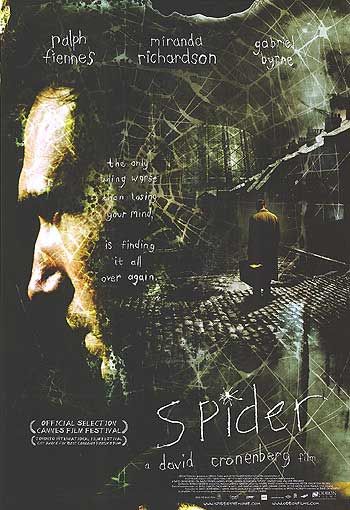 "Spider" is a 2002 directed by Canadian and based on the novel of the same name by , who also wrote the screenplay.

The film premiered at the 2002 and enjoyed some media buzz; however, it was released in only a few theaters at the year's end by distributor . Nonetheless, the film enjoyed much acclaim by critics and especially by Cronenberg enthusiasts. The film garnered a Best Director award at the Canadian . The stars of the film, and particularly , received several awards for their work in the film.

During a Question and Answer session at the Kodak Lecture Series in May 2005, Cronenberg revealed that neither he, Fiennes, Richardson, nor the producers received any sort of salary during the shooting of the film. All chose to waive their salaries so the money could be used to fund the under-funded production.

"Spider" is an exploration of a told through the eyes of a son who watches his father murder his mother and replace her with his mistress. Years later, the son, now a grown man, is released from a mental institution and begins piecing together his memories to recreate the fateful childhood event.

Central themes of the film include and the unreliability thereof.