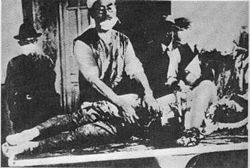 The Jinan Incident (Wade-Giles: Tsinan Incident, Japanese: 済南事件) or May 3rd Tragedy (simplified Chinese: 五三惨案; traditional Chinese: 五三慘案; pinyin: wŭ sān cǎnàn), was an armed conflict between the Japanese Army allied with Northern Chinese warlords against the Kuomintang's southern army in Jinan, the capital of Shandong in 1928 during the Kuomintang's Northern Expedition.

During the Northern Expedition, troops of the Chinese National Revolutionary Army attacked several foreign consulates in a fervor of anti-imperialism in what became known as the Nanjing Incident of March 1927. Chiang Kai-shek sought to avoid repetition of such incidents, and in November 1927 he met with Tanaka Giichi, who had become Japan's premier in April of that year (and also held the portfolio of Foreign Minister)in part, on the strength of promises to take more active and aggressive measures than his predecessor toward protection of Japanese lives, property, and economic interests in China. Chiang had only a tenuous hold on power in China and relied in large measure on the promise to end foreign domination and re-unify the country to buttress his legitimacy. [1]

Tanaka realized that the use of force was not necessarily the best way to protect Japanese interests, and Chiang both wanted to keep his troops away from Jinan and the risks of a costly but useless clash. With no guarantee that Chinese National Revolutionary Army would bypass Jinan, prior political commitments and Imperial Japanese Army insistence forced Tanaka to reinforce Japanese forces in the Shandong leased territory. Between May and September 1927, some 4000 troops were deployed to Qingdao and Jinan in what was known in Japan as the First Shandong Expedition (第一山東出兵, Dai-ichi Santo Shuppei?). Both the northern warlord coalition government in Beijing (Peking) and the Kuomintang government in Nanjing (Nanking) protested vigorously that this was a violation of China's sovereignty, and the Japanese forces were withdrawn when Chiang temporarily halted his northern advance. [2] 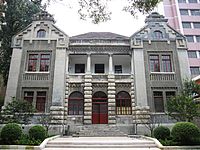 Former foreign office building in Jinan, site of the execution of Cai Gongshi

When the Northern Expedition resumed on 27 April 1928, contrary to his standing orders from Tokyo, the Japanese commander General Fukuda Hikosuke, moved troops from Tianjin into Ji'nan and Qingtao along the Jiaoji Railway. This was known in Japanese as the Second Shandong Expedition (第二山東出兵, Dai-ni Santo Shuppei?). Northern Chinese troops under Zhang Zongchang withdrew from the city on 30 April 1928 and Kuomintang troops, also acting contrary to Chiang Kai-shek’s orders, moved in. Matters remained tense as the Japanese took up positions at the Japanese consulate and various Japanese-controlled businesses and schools, but reasonably quiet and amicable until a minor clash occurred near the home of a Japanese family on 3 May 1928 resulting the deaths of 12 Japanese. The British Acting Consul-General reported that he had seen the bodies of Japanese males who had been castrated. Japanese reports blamed the shooting on troops under General He Yaozu (賀耀祖) reputed to have been responsible for the Nanjing Incident, while the Chinese reports held that Chinese soldiers had been attacked by Japanese. Leaders on both sides agreed on a truce and a cease-fire, and the Japanese consul general in the city pushed for peace. General Fukuda and his fellow generals, however, perhaps motivated by the desire for action, felt that they could not let the "insult" to Japanese honor go unpunished, but did not take action until they had built up stocks of food and ammunition. [3]

Chiang Kai-shek judged it more important for his troops to move on to Peking than to fight in Ji'nan and sent a team of officers to negotiate. On May 7, General Fukuda issued a five point set of demands so onerous that the Chinese would have no choice but to refuse, with a twelve hour deadline. He refused to release the negotiators, including Cai Gongshi (蔡公時) and 16 others in his team. When Cai asked that the demands be officially stated, in order to take them to his superiors and release them to the public, his leg was broken, his teeth smashed, his tongue cut, and he was shot. Having received reinforcements and supplies, the Japanese by 11 May, after fierce fighting, pushed the Chinese troops from the area and inflicted thousands of casualties. [4]

Publicly, Chiang apologized to the Japanese and removed the Chinese commander; in his diary he expressed his new feeling that Japan was China's greatest enemy. But "before one can settle scores," he wrote, "one must be strong." [5]

If the incident had been an isolated example of Japanese assertion and Chinese resistance, a general understanding might have been reached. However, Chiang's troops expanded their control in North China and the Japanese Army continued to distrust the forces of Chinese nationalism. [6] Japanese Army leaders feared that Chiang would respond to patriotic agitation and threaten their interests in South Manchuria. On 4 June, Zhang Zuolin, the military leader of Manchuria who had been talking about joining forces with Chiang, was blown up as he rode in special train by officers of the Japanese Army, setting off a chain of events leading to the seizure of Manchuria and the establishment of Manchukuo. When Chiang lectured a group of Chinese army cadets, he urged them to turn their energies to washing away the shame of Jinan, but to conceal their hatred until the last moment. [7] The Kuomintang government later decreed that May 3rd be designated a "National Humiliation Memorial Day."