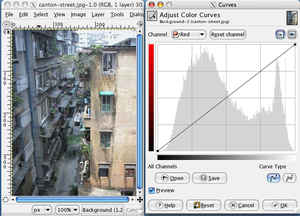 Photo and curve dialog in the GIMP 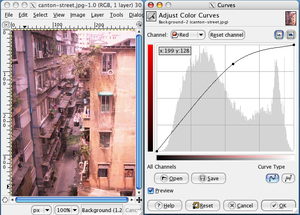 Photo and curve dialog with red colour emphasized in the lighter end of the spectrum.

In image editing, a curve is a remapping of image tonality, specified as a function from input level to output level, used as a way to emphasize colours or other elements in a picture.[1][2]

Curves can usually be applied to all channels together in an image, or to each channel individually.

Applying a curve to all channels typically changes the brightness in part of the spectrum. The software user may for example make light parts of a picture lighter and dark parts darker to increase contrast.

Applying a curve to individual channels can be used to stress a colour. This is particularly efficient in the Lab color space due to the separation of luminance and chromaticity,[3] but it can also be used in RGB, CMYK or whatever other color models the software supports.