Kill and Be Killed

Kill and Be Killed 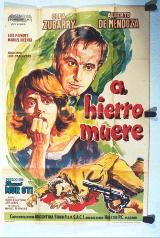 _es. A hierro muere (Spanish for "Kill and Be Killed") is a 1962 Spanish-Argentine directed by and written by . Starring , and .

A former singer lives alone with her fortune and her low-life nephew, Fernando, to whom she refuses to lend more money. Elisa leaves prison and starts a new life as a personal attendant to the aging singer, using her knowledge as a former nurse - a profession she can not return to. Fernando meets Elisa, and together they plan to the lonely woman, and use her money abroad.

The film was produced by in .