Lady Margaret Beaufort (31 May 1443 or 1441 – 29 June 1509), later Countess of Richmond and Derby, was the mother of King Henry VII and grandmother of King Henry VIII of England. She was a key figure in the Wars of the Roses, an influential matriarch of the House of Tudor and foundress of two Cambridge colleges. In 1509, she briefly served as regent of England for her grandson.

Margaret was born at Bletso Castle, Bedfordshire, on 31 May 1443 or 1441. The date and month are not disputed, as she required Westminster Abbey to celebrate her birthday on 31 May. The year of her birth is more uncertain. William Dugdale, the 17th century antiquary, has suggested that she may have been born two years earlier, in 1441. This suggestion is based on evidence of inquisitions taken at the death of Margaret's father. Dugdale has been followed by a number of Margaret's biographers. However, it is more likely that she was born in 1443, as in May 1443, her father had negotiated with the King about the wardship of his unborn child in case he died on a campaign.[1]

She was the daughter of John Beaufort, 1st Duke of Somerset, and Margaret Beauchamp of Bletso. At the moment of her birth, Margaret's father was preparing to go to France and lead an important military expedition for King Henry VI. Somerset negotiated with the king to ensure that, in case of his death, the rights to Margaret's wardship and marriage would belong only to his wife. However, Somerset fell out with the king after coming back from France. He was banished from the court and was about to be charged with treason. He died shortly afterwards. According to Thomas Basin, Somerset died of illness, but the Crowland Chronicle reported that his death was suicide. Margaret, as his only child, was the heiress to his fortunes.[2]

On Margaret's first birthday, the King broke his arrangement with Margaret's father and gave her wardship to William de la Pole, 1st Duke of Suffolk, though Margaret remained with her mother. Margaret's mother was pregnant at the time of Somerset's death but her sibling did not survive and Margaret remained sole heiress.[3] Although she was her father's only legitimate child, Margaret had two half-brothers and three half-sisters from her mother's first marriage whom she supported after her son's accession.[4]

Margaret was married to Suffolk's son, John de la Pole. The wedding was held between 28 January and 7 February 1450. Papal dispensation was granted on 18 August 1450 because the spouses were too closely related. Three years later, the marriage was dissolved and the king granted Margaret's wardship to his own half-brothers, Jasper and Edmund Tudor.[5][6][7]

Margaret never recognised this marriage. In her will, made in 1472, Margaret refers to Edmund Tudor as her first husband. Under canon law, Margaret was not bound by the marriage contract anyway, as she entered the marriage before reaching the age of twelve.[5] 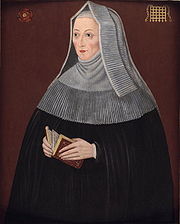 Even before the annulment of her first marriage, Henry VI chose Margaret as a suitable bride for his half-brother, Edmund Tudor, 1st Earl of Richmond. Edmund was the eldest son of the king's mother, Dowager Queen Catherine, by her liaison with Owen Tudor.[5]

Margaret was 12 when she married 24-year old Edmund Tudor on 1 November 1455. The Wars of the Roses had just broken out; Edmund, a Lancastrian, was taken prisoner by Yorkist forces less than a year later. He died in captivity the following November, leaving a 13-year-old widow who was seven months pregnant with their child. At Pembroke Castle on 28 January 1457, the Countess gave birth to her only child, Henry Tudor. The birth was particularly difficult; at one point, both the Countess and her child were close to death, due to her young age and small size.[8]

Margaret and her son remained in Pembroke until the York triumphs of 1461.[9] Margaret Beaufort's relationship with her only child was extraordinary. The mother had barely seen her son since he was a young child; from the age of two, Henry lived with his father's family in Wales and from the age of fourteen, he lived in exile in France. During this period, their relationship was sustained by letters and a few visits.[10]

The Countess always respected the name and memory of Edmund for he was the father of her only child. In 1472, sixteen years after his death, Margaret specified in her will that she wanted to be buried alongside Edmund, although she enjoyed a long, stable and close relationship with her third husband who died in 1471. She had no children with her future husbands. The birth of her only child when she was only thirteen years old was difficult enough to render her infertile.[11]

On 3 January 1462, Margaret married Henry Stafford (c.1425–1471), son of Humphrey Stafford, 1st Duke of Buckingham. The dispensation for the marriage, necessary because Margaret and Stafford were first cousins, was granted on 6 April. The Countess enjoyed a fairly long and harmonious relationship for the first time during her marriage to Stafford. Margaret and her husband were given 400 marks worth of land by Buckingham, but Margaret's own estates were still the main source of income. Margaret's estates enabled the pair to enjoy an aristocratic lifestyle. They had no children.[12] 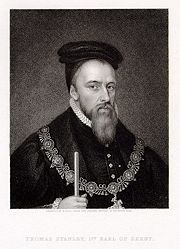 In June 1472, Margaret married Thomas Stanley, the Lord High Constable and King of Mann. Their marriage was at first a marriage of convenience. Recent historians have suggested that Margaret never considered herself a member of the Stanley family.[13]

When summoned to fight at the Battle of Bosworth Field in 1485, Thomas Stanley stayed aloof from the battle, even though his eldest son, George Stanley (styled Lord Strange) was held hostage by Richard. After the battle, it was Stanley who placed the crown on the head of his stepson, who later made him Earl of Derby. Margaret was now styled "Countess of Richmond and Derby". 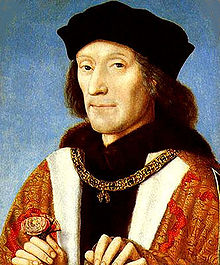 With her son winning the crown at Bosworth Field, the Countess was now referred to in court as "My Lady the King's Mother". As such, she enjoyed legal and social independence which other married women could not. Her son's first parliament recognised her right to hold property independently from her husband, as if she were unmarried.[15]

Henry now married Elizabeth of York. The Countess herself was reluctant to accept a lower status than the dowager queen Elizabeth, or even her daughter-in-law, the queen consort. She wore robes of the same quality as the queen consort and walked only half a pace behind her.

Margaret had signed herself M. Richmond for years since the 1460s. In 1499, she changed her signature to Margaret R., perhaps signifiying her royal authority (R standing either for regina – queen in Latin as customarily employed by female monarchs – or for Richmond). Furthermore, she included the Tudor crown and the caption et mater Henrici septimi regis Angliæ et Hiberniæ[16][17] ("and mother of Henry VII, king of England and Ireland").

Many historians believe the banishment of dowager queen Elizabeth in 1487 by Henry VII was partly at the behest of his influential mother. The Countess was known for her education and her piety, and her son is said to have been devoted to her. He died on 21 April 1509, having designated his mother chief executor of his will. She arranged her son's funeral and her grandson's coronation; at the former, the Countess was given precedence over all the other women of the royal family.

On the death of Henry VII, the Countess was declared to be regent for her grandson, Henry VIII, who was considered too young to reign on his own.

Her regency was short lived, however, as the Countess died on 29 June 1509, the day after her grandson's 18th birthday, in the Deanery of Westminster Abbey, just over two months after the death of her son. She is buried in the Henry VII Lady Chapel of the Abbey, in a black marble tomb topped with a bronze gilded effigy and canopy, between the graves of William and Mary and the tomb of Mary, Queen of Scots. 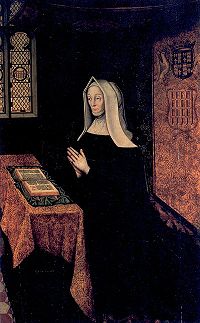 In 1497 she announced her intention to build a free school for the general public of Wimborne, Dorset. With her death in 1509, Wimborne Grammar School, now Queen Elizabeth's School, came into existence.

In 1502 she established the Lady Margaret's Professorship of Divinity at the University of Cambridge.

In 1505, following the accession of her son Henry VII to the throne, she refounded and enlarged God's House, Cambridge as Christ's College with a royal charter from the King. She has been honoured ever since as the Foundress of the College. A copy of her signature can be found carved on one of the buildings (4 staircase, 1994) within the College. In 1511, St John's College, Cambridge was founded by her estate, either at her direct behest or at the suggestion of her chaplain. Land that she owned around Great Bradley in Suffolk was bequeathed to St John's upon its foundation. Her portrait hangs in the Great Hall at St John's, and the college boat club is called the Lady Margaret Boat Club (LMBC).

Lady Margaret Hall, the first women's college at the University of Oxford, was named in her honour.

The Beaufort Club, a fine dining society of Christ's College Cambridge, was named after her.

She funded the restoration of Church of All Saints, Martock and the construction of the church tower.[18]

There is a school named after her in Riseley, Bedfordshire.

Her portrait depicts her at prayer in her richly furnished private closet behind her chamber. It is a rare contemporary glimpse into a late Gothic aristocratic English interior and tells a great deal about her status and lifestyle. The severe black of her widow's weeds contrasts with the splendour of her private apartment, where every surface is patterned, even the floor alternating cream-coloured and terracotta tiles. The plain desk at which she kneels is draped with a richly patterned textile that is so densely encrusted with embroidery that its corners stand away stiffly. Her lavishly illuminated Book of Hours is open before her, with its protective cloth wrapper (called a "chemise" binding) spread out around it.

The walls are patterned with oak leaf designs, perhaps in lozenges, perhaps of stamped and part-gilded leather. Against the wall hangs the dosser of her canopy of estate, with the tester above her head (the Tudor rose at its centre) supported on cords from the ceiling. The coats-of-arms woven into the tapestry are of England (parted as usual with France) and the portcullis badge of the Beauforts, which the early Tudor kings later used in their arms. Small stained glass roundels in the leaded glass of her lancet windows also display elements of the arms of both England (cropped away here) and Beaufort. 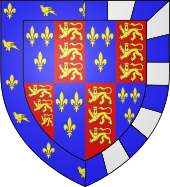 The character of Lady Margaret, portrayed by Marigold Sharman, appears in eight episodes of the BBC miniseries Shadow of the Tower, opposite James Maxwell as her son Henry VII. She is portrayed as a woman of extreme ambition and piety, with a hint of ruthlessness for those that stand in the way of the Tudor Dynasty.

Following Gaunt's marriage to Katherine, their children (the Beauforts) were legitimised, but the legitimation carried a condition: their descendants were barred from ever inheriting the throne. Lady Margaret's own son Henry VII (and all English, British, and UK sovereigns who followed) are descended from Gaunt and Swynford, Henry VII having come to the throne not through inheritance but by force of arms.