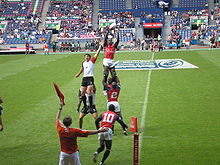 A lineout during the 2008 Edinburgh Sevens

The Emirates Airline Edinburgh Sevens, also known as the Edinburgh 7s and Scotland Sevens,[1] is a rugby union sevens tournament, part of the IRB Sevens World Series, held at Murrayfield in Edinburgh, Scotland. It will have the honour of being the last event in each season's IRB Sevens. The hosting contract between the International Rugby Board, which operates the IRB Sevens, and the Scottish Rugby Union runs from 2007 through 2011.

The first and second tournaments was held near the beginning of June, with Emirates Airline as the title sponsor. The events included a Festival of Rugby on the nearby training pitches outside Murrayfield.