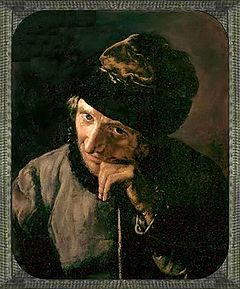 A coachman is a man whose business it is to drive a coach, a horse-drawn vehicle designed for the conveyance of more than one passenger — and of mail — and covered for protection from the elements. He has also been called a coachee, coachy or whip.

The term "coachman" is correctly applied to the driver of any type of coach, but it had a specialized meaning before the advent of motor vehicles, as the servant who preceded the chauffeur in domestic service. In a great house, this would have been a specialty, but in more modest households, the coachman would have doubled as the stablehand or groom.

In early coaches he sat on a built-in compartment called a boot, bracing his feet on a footrest called a footboard. He was often pictured wearing a box coat or box jacket, a heavy overcoat with or without shoulder capes, double-breasted, with fitted waist and wide lapels; its name derives from its use by coachmen riding on the box seat, exposed to all kinds of weather. An ornamented, often fringed cloth called a hammercloth might have hung over the coachman's seat, especially of a ceremonial coach. He could be seen taking refreshments at a type of public house called a watering house.

A coachman was sometimes called a jarvey or jarvie, especially in Ireland (Jarvey was a nickname for Jarvis). In the first of his Sherlock Holmes stories, 'A Study in Scarlet', Conan Doyle refers to the driver of a small cab in London as a jarvey. A coachman who drove dangerously fast or recklessly might invoke biblical or mytholological allusions: Some referred to him as a jehu, recalling King Jehu of Israel, who was noted for his furious attacks in a chariot (2 Kings 9:20) before he died about 816 BCE. Others dubbed him a Phaeton, harking back to the Greek Phaëton, son of Helios who, attempting to drive the chariot of the sun, managed to set the earth on fire. When there was no coachman, a postilion or postillion sometimes rode as a guide on the near horse of a pair or of one of the pairs attached to a coach.

The English word coach, the Spanish and Portuguese coche, the German Kutsche, and the Slovak and Czech koč all probably derive from the Hungarian word "kocsi", literally meaning "of Kocs".[1] Kocs (pronounced "kotch") was a Hungarian post town, and the coach itself may have been invented in Hungary. Hungarian villages such as Zakopane still hold Coachman of the Year competitions.[2]

The coachman soon became a prominent figure in Hungarian folklore. As the Clever Coachman (tudós kocsis),[3] he turns up unexpectedly in the hero's life, either knowing his name or naming him by his true name. After the hero enters the coach, the coachman becomes a kind of guide. He may not take the hero to where he wants to go, but he always takes him to where he needs to be.[4] Many of Steven Brust's novels play with this image of the coachman.

Coachman is also a synonym for the pennant coralfish (Heniochus Monoceros).

Coachman is also a very famous fly used for flyfishing. The pattern exist as both a dry-fly and wet-fly. The pattern is composed before 1860 in England.