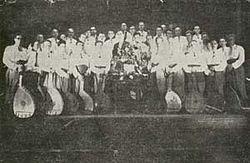 The Combined Bandurist Capella 1937 р. under the direction of D. Balatsky

A few months after the liquidation of all of the professional bandurist capellas in October 1934, a reversal of policy took place.

A call came from Moscow for performing ensembles from Ukraine to perform at the Decade of Ukrainian Culture in Moscow. It was decided in February 1935 to form a new group established by combining the musicians of the former Kiev Bandurist Capella, the Poltava Bandurist Capella and the Bandurist Capella of the Kiev Philharmonia.

From the Poltava Capella:

From the Kiev Philharmonia Bandurist Capella:

Members from other bandura groups included:

The director of the new group was Zakhariy Aronsky, Administrator: I Nedolia.

In 1936 the Combined Capella performed in Moscow at the Decade of Ukrainian Culture in Moscow and recorded a number of disks there.

Mykhailov, however, died in 1937 during a tour of the Caucasus, in Tashkent. His death from angina was thought to have been suspicious.

In 1939, the ensemble was sent on a tour of Western Ukraine with a Ukrainian nationalistic program commemorating the 125th anniversary of Taras Shevchenko. The program was known as Slovo Tarasa. It included songs which had previously been banned by the Soviet censors and was specifically geared to entice the Western Ukrainian population to embrace the Soviet administration. The program however was not allowed to be performed in the areas that were previously formally part of the Soviet Union.

In 1941, the Nazi attack on the Soviet Union came when the Kiev Bandurist Capella was performing for the miners in Kryviy Rih. They returned through the chaos to Kiev where, on July 8, 1941, the chorus was disbanded and most of its members were mobilized. Within days some of the members, such as Danylo Pika and Mykola Opryshko, were killed on the front. It is interesting to note that Russian ensembles did not suffer the same fate. They remained intact to perform in front of the Soviet troops.

Mykola Mykolayovych Mykhajlov (director 1935-36) was previously a member of the Kiev Capella from 1932 and director in 1934. He was a graduate of the Lysenko Music Institute. Became the conductor/director of the combined group from February 1935, until his death 16 July 1936 in Tashkent during the tour of the Caucuses from angina. His assistant was Danylo Pika.

Dmytro Yevhenovych Balatskyj (director 1937-38) (born 1902, died 1981) completed his studies at the Kiev Muz-dram institute in 1929. Director of the Kiev Bandurist Capella 1937-38. Arrested in 1938. Returned to Ukraine from Siberian Exile in 1947 moving to Odessa where he worked as a choral conductor. Author of the song "Rozpriahajte khloptsi koni".

Danylo Pika (director 1938-41). With the removal (arrest) of Balatsky, Pika again had a chance to become the artistic director of the chorus. Although he did not have a formal music education, he had for many years been the concertmaster of the Capella. Pika prepared the first "Slovo Tarasa" program in 1939 to coincide with the Shevchenko Jubilee and the tour of the recently acquired Western Ukrainian lands.