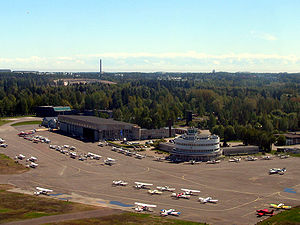 Helsinki-Malmi Airport (Finnish: Helsinki-Malmin lentoasema, Swedish: Helsingfors-Malm flygplats) (IATA: HEM, ICAO: EFHF) is an airport in the city of Helsinki, Finland, located in the district of Malmi, 5.4 NM (10.0 km; 6.2 mi) north north-east[1] of the city centre. Until the opening of the Helsinki-Vantaa Airport in 1952 it was the main airport of Helsinki and all Finland. Today, the airport is still actively used in general aviation and flight training. It still is the second busiest airport in Finland after Helsinki-Vantaa Airport, as measured by the number of landings.[2]

For a long time, the City of Helsinki has had plans to close the airport in order to use the area for construction of new residential zones. However, the closure of the airport has been a very controversial issue and its future remains unclear.

The first land airport of Helsinki, located in Tattarisuo in the township of Malmi, became operational in December 1936. The area is nowadays in the district of Malmi in Helsinki. The airplanes of Aero Ltd (nowadays Finnair) were converted from floatplanes to land-based aircraft without delay and moved to the new Airport along with general aviation aircraft. The functionalist terminal building was completed in 1938 and designed by architects Dag Englund and Vera Rosendahl.[3] The official opening ceremony took place on 15 May 1938.

Helsinki-Malmi Airport was among the first in the world to be designed from the beginning as an international airport. It made travel to and from the capital of Finland much faster than before. In the late 1930s, domestic air routes already reached all the major cities in Finland, and in 1940 it became possible to fly even to Petsamo in the far north.

The Winter War interrupted civil aviation at Malmi, and the Airport was taken over by the Finnish Air Force. Civilian traffic was moved to other airfields. In the Continuation War both civilian and military traffic used Malmi Airport. When the Continuation War ended in September 1944, the Airport was taken over by the Allied Control Commission. It was returned to the supervision of the Finns at the end of 1946.

During the war, bigger and heavier aircraft had been developed, and after the war the aircraft industry and commercial aviation business flourished. Malmi Airport was confronted by a new situation. It became evident that the runways, built originally on a deep layer of clay and swampy topsoil, would require considerable investment if they were to bear the weight of the new big airliners. Cost estimates showed that extending the runways, adding pilework under them and strengthening them in other ways would be too expensive. The plans were abandoned.

A new airfield of international standards was first opened to traffic in 1952 in Seutula, in time for the 1952 Summer Olympics in Helsinki. It is today known as Helsinki-Vantaa Airport. Scheduled traffic gradually moved from Malmi to the new airport. Malmi Airport continued to serve a new category of commercial aviation, charter flights, for many years. 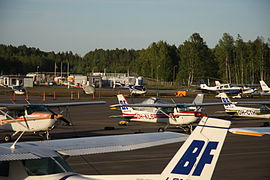 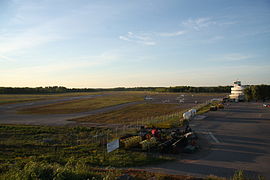 Runway 36 in the evening sun.

Nowadays Malmi Airport is in general aviation use. Professional flying education and professional aviation as well as private aviation and aviation clubs operate there. 75 to 80 percent of all flights are training flights,[4] and in 2002, 50 percent of all pilots in Finland and two out of three professional pilots were trained there. The Finnish Border Guard is an important user of the Airport. In special circumstances, Malmi Airport also acts as a backup airfield for Helsinki-Vantaa for lighter passenger aircraft.

Malmi Airport is also popular among people who like outdoor exercise because its environment offers natural scenery and a nature path encircles the airport area. The aviation shows and other public events taking place at the Airport draw tens of thousands of spectators every year. The exceptionally well preserved pre-WWII aviation milieu of Malmi Airport has also received international recognition. It has been selected to the worldwide List of 100 Most Endangered Cultural Sites 2004 by the World Monuments Fund, and re-selected to the 2006 list.[5] The Airport is also included in the Finnish selection of the international DoCoMoMo Workgroup dedicated to cataloguing and preserving buildings, monuments and sites of the modern movement.[6]

The future of Malmi Airport is uncertain as the City of Helsinki has plans for housing construction on the site. However, the State of Finland has a legally valid land cession agreement with the City of Helsinki until 2034. In January 2005, the Helsinki City Board decided to communicate to the State that the grounds for annulling the land cession agreement exist, and to ask the State to return the land area to the City's control by the end of 2010. The Ministry of Transport and Communications ordered in June 2005 from the Civil Aviation Administration a new assessment of the alternatives and costs. This Helsinki region airport survey was published on 16 August 2007 and presented in detail the main alternatives of developing the operations at Helsinki-Malmi by building a new long runway equipped with instrument approach facilities and decommissioning all the old runways, and of constructing a new airfield in Backas near the town of Porvoo, about 50 kilometres (30 mi) east. Two alternatives are also presented for just a helicopter base in Malmi or in Skarpmossen of Sipoo. The survey is meant to serve as a decision-making aid along with other related material.[7] In February 2008, the Ministry of Transport and Communications commissioned an environmental impact assessment of the survey's alternatives from Finnish Road Administration. The assessment is estimated to take 2–3 years.