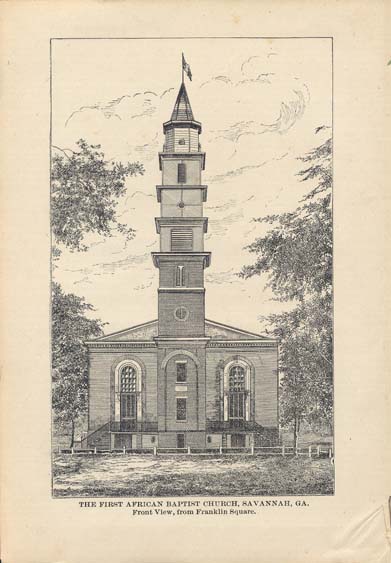 country =
phone = (912) 233-2244 / 6597
website = [http://www.oldestblackchurch.org www.oldestblackchurch.org] First African Baptist Church, located in is thought to be the home of the oldest congregation in North America founded in 1777 by the . This claim is contested by a church in and the in . The church also operates a museum which displays memorabilia which dates back to the eighteenth century.

founded the First Colored Church in 1777 in Savannah, Georgia. Liele, a slave, was the first licensed to preach as a in Georgia in 1773. His initial ordination was to preach to slaves on plantations along the , in Georgia and South Carolina. Upon the death in battle of his master (a British Loyalist) in 1778, Liele made his way to the British-occupied city of Savannah. Over the next few years, he built a congregation of African-American Baptists, slave and free, including David George (one of eight slaves who were baptized and formed a congregation on a plantation in Silver Bluff, South Carolina) and Andrew Bryan (the church's second pastor after Liele and his family sailed with the British to Jamaica in 1784). In 1802, the First Colored Baptist Church spawned two other congregations: Second Colored Church and the Ogeechee Baptist Church.

The Civil War and the Underground Railroad

The holes in the sanctuary flooring form a design meant to look like a tribal symbol. These were instead air holes for slaves who would hide in the church which served as a stop on the . During the Civil War, the church housed runaway slaves in a 4-foot space beneath the sanctuary floorboards.

Participants in the early in Savannah held weekly meetings at the church.

The current sanctuary facility is located in in the National historic district on Franklin Square and was built in the 1850s (completed in 1859) by both free and . The builders made the bricks for the church and built the church after the slaves labored in the fields all day and upon its completion, the church gained the distinction as the first building constructed of brick in the State of Georgia owned by African-Americans.. The building is listed in the as a part of the Savannah Historic District.

The upstairs balcony contains some of the original pews made by the slaves and on the sides of the pews, tribal symbols of the slaves who made the pews can be found. The stained glass windows in the building date back to 1885 and depict subjects.

The original bell tower of the church was destroyed by a hurricane in the early twentieth century.

The church museum contains archives and memorabilia that date back to the eighteenth century.including memorabilia dating to the church's beginning in 1773. It also houses pictures of the church's seventeen pastors, written records (from the 1800s to present), communion sets dating back to 1814), and newspaper articles (from 1861 showing the dedication of the facility). Handmade quilts are also on display with the history behind the designs.

The museum is open to visitors daily during normal hours of operation (10:00 A. M. - 4:00 P.M. Monday through Friday) and by appointment at other times. Guests are given guided tours through the church facility and the museum. The church began offering tours to the public in the early 1970s and an estimated twenty to twenty five thousand visitors tour the facility each year.

] The church is affiliated with the (the second largest organization in the world, after the ), and the General Missionary Baptist Convention of Georgia, Inc.