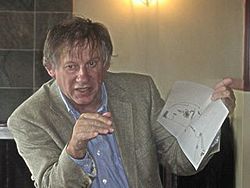 Christopher Wolfgang Alexander (born October 4, 1936 in Vienna, Austria) is a registered architect noted for his theories about design, and for more than 200 building projects in California, Japan, Mexico and around the world. Reasoning that users know more about the buildings they need than any architect could, he produced and validated (in collaboration with Sarah Ishikawa and Murray Silverstein) a "pattern language" designed to empower anyone to design and build at any scale. Alexander is often overlooked by texts in the history and theory of Architecture because his work intentionally disregarded contemporary Architecture discourse, appealing more through methods consistent with his theories than through established practices.[1] As such, Alexander is widely considered to occupy a place outside the discipline, the discourse, and the practice of Architecture. In 1958 he moved from England to the United States, living and teaching in Berkeley, California from 1963. He is professor emeritus at the University of California, Berkeley. Now retired (though still active), he is based in Arundel, Sussex, UK.

Alexander grew up in England and started his education in sciences. In 1954, he was awarded the top open scholarship to Trinity College, Cambridge University in chemistry and physics, and went on to read mathematics. He earned a Bachelor's degree in Architecture and a Master's degree in Mathematics. He took his doctorate at Harvard (the first Ph.D. in Architecture ever awarded at Harvard University), and was elected fellow at Harvard. During the same period he worked at MIT in transportation theory and in computer science, and worked at Harvard in cognition and cognitive studies.

Alexander was awarded the First Gold Medal for Research by the American Institute of Architects in 1972. He was awarded the Seaside Prize in 1994. He was elected a Fellow of the American Academy of Arts and Sciences in 1996.[2] In 2006 he was one of the two inaugural recipients of the Athena Award, given by the Congress for the New Urbanism (CNU). On 5 November 2009, at a ceremony in Washington D.C., he was awarded (in absentia) the Vincent Scully Prize by the National Building Museum. In 2011 he was awarded the lifetime achievement award by the Urban Design Group.

The Timeless Way of Building (1979) described the perfection of use to which buildings could aspire:

There is one timeless way of building. It is a thousand years old, and the same today as it has ever been. The great traditional buildings of the past, the villages and tents and temples in which man feels at home, have always been made by people who were very close to the center of this way. It is not possible to make great buildings, or great towns, beautiful places, places where you feel yourself, places where you feel alive, except by following this way. And, as you will see, this way will lead anyone who looks for it to buildings which are themselves as ancient in their form, as the trees and hills, and as our faces are.

A Pattern Language: Towns, Buildings, Construction (1977) described a practical architectural system in a form that a theoretical mathematician or computer scientist might call a generative grammar.

The work originated from an observation that many medieval cities are attractive and harmonious. The authors said that this occurs because they were built to local regulations that required specific features, but freed the architect to adapt them to particular situations.

The book provides rules and pictures, and leaves decisions to be taken from the precise environment of the project. It describes exact methods for constructing practical, safe and attractive designs at every scale, from entire regions, through cities, neighborhoods, gardens, buildings, rooms, built-in furniture, and fixtures down to the level of doorknobs.

A notable value is that the architectural system consists only of classic patterns tested in the real world and reviewed by multiple architects for beauty and practicality.

The book includes all needed surveying and structural calculations, and a novel simplified building system that copes with regional shortages of wood and steel, uses easily-stored inexpensive materials, and produces long-lasting classic buildings with small amounts of materials, design and labor. It first has users prototype a structure on-site in temporary materials. Once accepted, these are finished by filling them with very-low-density concrete. It uses vaulted construction to build as high as three stories, permitting very high densities.

This book's method was adopted by the University of Oregon, as described in The Oregon Experiment (1975), and remains the official planning instrument. It has also been adopted in part by some cities as a building code.

The idea of a pattern language appears to apply to any complex engineering task, and has been applied to some of them. It has been especially influential in software engineering where patterns have been used to document collective knowledge in the field.

A New Theory of Urban Design (1987) coincided with a renewal of interest in urbanism among architects, but stood apart from most other expressions of this by assuming a distinctly anti-masterplanning stance. An account of a design studio conducted with Berkeley students, it shows how convincing urban networks can be generated by requiring individual actors to respect only local rules, in relation to neighbours. A vastly undervalued part of the Alexander canon, A New Theory is important in understanding the generative processes which give rise to the shanty towns latterly championed by Stewart Brand,[3] Robert Neuwirth,[4] and the Prince of Wales.[5]

The Nature of Order: An Essay on the Art of Building and the Nature of the Universe (2003-4), which includes The Phenomenon of Life, The Process of Creating Life, A Vision of a Living World and The Luminous Ground, is Alexander's latest, and most comprehensive and elaborate work. In it, he puts forth a new theory about the nature of space and describes how this theory influences thinking about architecture, building, planning, and the way in which we view the world in general. The mostly static patterns from A Pattern Language have been amended by more dynamic sequences, which describe how to work towards patterns (which can roughly be seen as the end result of sequences). Sequences, like patterns, promise to be tools of wider scope than building (just as his theory of space goes beyond architecture).

The online publication "Katarxis 3" (September 2004) includes several essays by Christopher Alexander, as well as the legendary debate between Alexander and Peter Eisenman from 1982.

Among Alexander's most notable built works are the Eishin Campus near Tokyo (the building process of which is soon to be outlined in his forthcoming book Battle); the West Dean Visitors Centre [6] in West Sussex, England; the Julian Street Inn (a homeless shelter) in San Jose, California (both described in Nature of Order); the Martinez House (an experimental house in Martinez, California made of lightweight concrete); the low-cost housing in Mexicali, Mexico (described in The Production of Houses); and several private houses (described and illustrated in "The Nature of Order"). Alexander's built work is characterized by a special quality (which he calls "the quality without a name") that relates to human beings and induces feelings of belonging to the place and structure. This quality is found in the most loved traditional and historic buildings and urban spaces, and is precisely what Alexander has tried to capture with his sophisticated mathematical design theories. Paradoxically, achieving this connective human quality has also moved his buildings away from the abstract imageability valued in contemporary architecture, and this is one reason why his buildings are under-appreciated at present.[1]

Alexander's Notes on the Synthesis of Form was required reading for researchers in computer science throughout the 1960s. It had an influence[8] in the 1960s and 1970s on programming language design, modular programming, object-oriented programming, software engineering and other design methodologies. Alexander's mathematical concepts and orientation were similar to Edsger Dijkstra's influential A Discipline of Programming.[9]

A Pattern Language‘s greatest influence in computer science is the design patterns movement.[10] Alexander's philosophy of incremental, organic, coherent design also influenced the extreme programming movement.[11] The Wiki was invented[12][13] to allow the Hillside Group to work on programming design patterns. More recently, The Nature of Order's "deep geometrical structures" have been cited as having importance for object-oriented programming, particularly in C++.[14]

Will Wright wrote that Alexander's work was influential in the origin of The Sims computer game, and in his later game Spore.[15]

The fourth volume of The Nature of Order approaches religious questions from a scientific rather than mystical direction. In it, Alexander describes deep ties between the nature of matter, human perception of the universe, and the geometries people construct in buildings, cities, and artifacts,[vague][examples needed] and he suggests a crucial link between traditional beliefs and recent scientific advances.[vague][examples needed] Despite his leanings toward Deism,[citation needed] Alexander has retained a respect for the Catholic church, believing it to embody a great deal of accumulated human truth within its rituals.[citation needed]