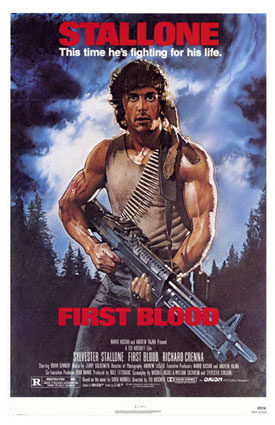 "First Blood" (also known as "Rambo: First Blood"), is a 1982 action / directed by . The film stars as the unstoppable , a troubled and misunderstood veteran, with Sheriff Will Teasle () as his nemesis and Colonel Samuel Trautman () as his ally. It was released on , . Based loosely on David Morrell's 1972 novel of the same name, it was the first of the four-film "Rambo" series.

Since its release, "First Blood" has been a critical and commercial success, and has had a lasting influence on the genre. It has also spurred countless parodies. The resulting "" franchise propelled Stallone to iconic status in the United States, although at the time of its release, Stallone had already gained popularity from the first three "" films. The film is also notable for its psychological portrayal of the aftereffects of the , particularly the challenges faced by American veterans attempting to re-integrate into society.

() is a former member of an elite unit, and was awarded a for his service in the . The film begins after the war, in America. Rambo is searching for his friend, and soon learns that he has died from cancer due to exposure. Although not yet revealed to the audience, Rambo knows he is now the last surviving member of his unit. The scene cuts to Rambo entering the small town of Hope, Washington (filmed in )(some parts of the movie were filmed in ) on foot. With his long hair and military-style coat, he is quickly spotted by the town's sheriff, Will Teasle (), who quickly drives Rambo out of town, noting his strong distaste for "drifters". Rambo heads back into town immediately, to Teasle's dismay, who arrests him.

Rambo is generally non-compliant with the officers at the station, and is beaten and harassed by Art Galt (), the sheriff's sadistic head deputy. This causes Rambo to have flashbacks to his time as a , and he eventually snaps. Rambo fights his way out of the station, steals a motorcycle, and is pursued off-road into the nearby mountains. The deputies are eventually forced to search for Rambo on foot, and he climbs down onto a steep cliff to elude capture. After spotting Rambo from a helicopter, Galt blatantly disregards protocol and attempts to shoot him in cold blood. Rambo drops into a mass of trees, and cornered, throws a rock at the helicopter. The helicopter pitches and Galt, the passenger, falls to his death. Teasle, who did not see Galt's attempt to kill Rambo, vows to avenge his friend's death.

Teasle leads his deputies into the woods in an attempt to capture Rambo. The deputies are inexperienced and bicker, particularly after learning over the radio about Rambo's combat experience and status as a war hero. Rambo quickly disables the small, disorganized team using guerrilla tactics and s, severely wounding- but not killing- the deputies. In the chaos, Rambo isolates and confronts Teasle with a knife to the throat. "Let it go", he warns, before disappearing into the woods. A base camp is assembled near the site and the National Guard is called in. Colonel Samuel Trautman () soon arrives, who takes credit for training Rambo. He is surprised to find any of the deputies still alive, and warns that it would be safer to let Rambo go and find him after the situation has calmed down. Teasle refuses to give in.

Rambo is eventually cornered by the National Guard in a mine entrance. The inexperienced guardsmen fire a disposable LAW rocket launcher at him, collapsing the mine, and assume Rambo is dead. Unbeknownst to his pursuers, Rambo has escaped into the tunnels of the mine with an improvised torch, fighting off rats. He is relieved to eventually find an exit, near a main road. Rambo quickly hijacks a passing Army truck and returns to town, crashing it into a gas station, which effectively blocks the highway to anyone in pursuit. Now armed with an M60 machine gun, Rambo effortlessly destroys a sporting goods shop and a few other businesses before making his way to the police station, where Teasle awaits on the roof.

Eventually Rambo enters the police station. Teasle spots Rambo and fires at him, but misses. Rambo shoots back at Teasle, injuring him. Teasle falls through the roof onto the floor. Rambo steps over him, prepared to kill him. Before Rambo can shoot Teasle, Colonel Trautman appears and tells him there's no hope of escaping alive. Rambo, now surrounded by the police, rages about the horrors of war, and the difficulties he has faced adapting to civilian life. He weeps as he recounts a particularly gruesome story about witnessing his friend's death. Rambo then turns himself in to Trautman, and is arrested. The credits roll as he and Trautman exit the police station.

* as
* as Sheriff Will Teasle
* as Colonel Samuel Trautman
* as State Police Capt. Dave Kern
* as Deputy Sgt. Arthur Galt
* as Deputy Balford
* as Deputy Ward
*John McLiam as Orval the Dog Man
*Alf Humphreys as Deputy Lester
* as Deputy Mitch
* as Shingleton
* as Preston

Various screenplays adapted from Morrel's book had been pitched to studios in the years since its publication, but it was only when Stallone, who at the time had limited success outside of the "" franchise (most of his non-"Rocky" films either barely broke even or were flops altogether), decided to become involved with the project that it was finally brought into production.Fact|date=July 2008 At least one "First Blood" poster, seen above, references his Rocky success: "Stallone. This time he's fighting for his life."

Stallone’s star power after the success of the Rocky films enabled him to suggest changes to the scriptFact|date=July 2008, to make the character of John Rambo more sympathetic. While Morrell's book has the Rambo character violently kill many of his pursuers, in the movie version Rambo does not directly cause the death of any police or national guardsmen.

Just before shooting began, quit the role of Col. Trautman over a script dispute; Douglas wanted the film to end as the book did, with the death of the Rambo character.Fact|date=July 2007 Richard Crenna was quickly hired as a replacement; the role of Trautman became the veteran character actor's most famous role, his performance of which received much critical praise and talk of an Academy Award nomination.Fact|date=July 2008 A suicide scene was filmed, but ultimately, Kotcheff and Stallone opted to have Rambo turn himself in at Trautman's urging.Fact|date=July 2008The town scenes in the movie were shot in Hope, , . The rest of the movie was shot in .

"First Blood", with a shooting budget of $15 million and a total domestic gross of $47 million, [ [http://www.boxofficemojo.com/movies/?id=firstblood.htm First Blood (1982) ] ] has been a moderate financial success, compared to other films released that year. For example, "E.T.", with a budget of just $10.5 million, brought in nearly $12 million in its opening weekend and has gone on to gross over $350 million. [ [http://www.boxofficemojo.com/movies/?id=et.htm E.T.: The Extra-Terrestrial (1982) ] ] Similarly, both "" and "" have grossed over $100 million each. [ [http://www.imdb.com/Sections/Years/1982/top-grossing Top grossing movies for 1982 in the USA ] ] Stallone's other 1982 film, "", also beat "First Blood" at the box office, pulling in over $12 million on its opening weekend with a total gross over $125 million domestically. [ [http://www.boxofficemojo.com/movies/?id=rocky3.htm Rocky III (1982) ] ] However, "First Blood" has not been a commercial failure. "" performed comparatively at the box office, and grossed only $32 million.

"First Blood" has received generally favorable reviews [ [http://www.metacritic.com/video/titles/firstblood?q=First%20Blood#critics First Blood (1982): Reviews ] ] , and is considered by many to be one of the best films of 1982. [ [http://www.film.com/features/story/10-best-movies-of-1982/15287150 The 10 Best Movies of 1982 - Film.com ] ] [ [http://www.imdb.com/Sections/Years/1982/total-votes Most popular 1982 titles by total votes ] ] Stallone, in particular, has received much praise for his performance. In his 1982 review, writes that he does not like the film's ending, but that it is "a very good movie, well-paced, and well-acted not only by Stallone...but also by Crenna and Brian Dennehy." He even goes as far to say, "although almost all of "First Blood" is implausible, because it's Stallone on the screen, we'll buy it." [ [http://rogerebert.suntimes.com/apps/pbcs.dll/article?AID=/19820101/REVIEWS/201010324/1023 Roger Ebert's 1982 review of the film] In 2000, BBC film critic Almar Haflidason noted that Stallone’s training in survival skills and hand-to-hand combat gave the film, "a raw and authentic edge that excited the audiences of the time." [ [http://www.bbc.co.uk/films/2000/11/30/first_blood_1982_review.shtml BBC - Films - review - First Blood ] ] . "First Blood"'s release on DVD sparked a series of contemporary reviews, earning it an 85% approval rating from and a score of 62 ("generally positive") from .

However, the film has not escaped criticism. Although Jeremiah Kipp praised Stallone's performance, stating that he "hits his climactic breakdown monologue out of the park” with a performance that was “sweet and moving,” [ [http://filmcritic.com/misc/emporium.nsf/reviews/First-Blood First Blood Movie Review, DVD Release - Filmcritic.com ] ] , he gave the film two stars out of four, and criticized its “comic book” dialogue and “macho, mindless escapism.” Brian Webster of the Apollo film site called "First Blood", "an embarrassingly sloppy production,” with a weak script. [ [http://apolloguide.com/mov_fullrev.asp?CID=1019 Apollo Movie Guide's Review of First Blood ] ] In general, the film was criticized for its violent scenes and for its supposed glorification of weapons (such as the M60, which featured prominently in advertising).Fact|date=July 2008

"First Blood"'s portrayal of a Vietnam veteran has also sparked some controversy. Some argue that the film "reflect [ed] a new compassion towards traumatized veterans of the Vietnam conflict," [ [http://filmcritic.com/misc/emporium.nsf/reviews/First-Blood First Blood Movie Review, DVD Release - Filmcritic.com] ] while others view the film as insulting and stereotypical.

This film was deemed "Unacceptable" by the AHA for the treatments of rats which were killed on and off screen [ [http://www.ahafilm.info/movies/moviereviews.phtml?fid=7213] ] .

Actor Sylvester Stallone recorded an audio commentary track for the "First Blood" Ultimate Edition DVD released in 2004. This edition also includes a "never-before-seen" alternate ending in which Rambo commits suicide (a brief snippet of which appears in a flashback in the fourth film) and a "humorous" ending tacked on afterwards. also released this version on Blu-ray. Both commentary tracks are on the Blu-Ray release.

The film was re-released as part of a 6-disc box set, which contains all 4 films in the series, on May 27th, 2008. However the box set is missing the David Morrell Commentary, even though the packaging clearly states it is included. [ [http://www.moviesonline.ca/movienews_14332.html Rambo (2008) DVD and BluRay Details ] ] In anticipation of the release, the film was shown back in theaters for one night, May 15th, 2008, through Fathom Events. [ [http://www.fathomevents.com Fathom Events ] ]