Normal human body temperature, also known as normothermia or euthermia, is a concept that depends upon the place in the body at which the measurement is made, and the time of day and level of activity of the person. There is no single number that represents a normal or healthy temperature for all people under all circumstances using any place of measurement. 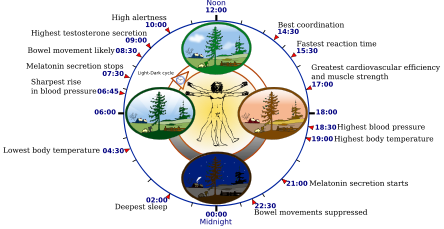 Variations in body temperature are part of the circadian rhythm (see at 4:30 and 19:00).

The time of day and other circumstances also affects the body's temperature. The core body temperature of an individual tends to have the lowest value in the second half of the sleep cycle; the lowest point, called the nadir, is one of the primary markers for circadian rhythms. The body temperature also changes when a person is hungry, sleepy, or cold.

In 1861, Carl Reinhold August Wunderlich released his summary of the armpit, or axillary, temperatures of twenty five thousand people, and reported the mean to be 37.0 °C (98.6 °F), with a range of 36.25 °C (97.25 °F) to 37.5 °C (99.5 °F)[5][1]. He also identified the natural variations in temperature throughout the day and the variations between individuals, as well as differences based on sex and age, which were largely ignored in favor of an oversimplified single number.[6] Wunderlich's thermometers were not calibrated to a standard setting—in 1861, no standard had been agreed upon—and he never explained his methods for compiling and describing the data he had collected, which would have been a monumental task before the availability of basic calculating machines.[6] The one surviving, hand-made thermometer reads significantly higher than modern thermometers.[6]

Temperature control (thermoregulation) is part of a homeostatic mechanism that keeps the organism at optimum operating temperature, as it affects the rate of chemical reactions. In humans the average oral temperature is 36.8 °C (98.2 °F), though it varies among individuals. However, no person always has exactly the same temperature at every moment of the day. Temperatures cycle regularly up and down through the day, as controlled by the person's circadian rhythm. The lowest temperature occurs about two hours before the person normally wakes up. Additionally, temperatures change according to activities and external factors.[7]

Body temperature normally fluctuates over the day, with the lowest levels around 4 a.m. and the highest in the late afternoon, around 4:00 p.m.[1][8] (assuming the person sleeps at night and stays awake during the day). Therefore, an oral temperature of 37.2 °C (99.0 °F) would, strictly speaking, be normal in the afternoon but not in the morning. An individual's body temperature typically changes by about 0.5 °C (0.9 °F) between its highest and lowest points each day.[1]

Body temperature is sensitive to many hormones, so women have a temperature rhythm that varies with the menstrual cycle, called a circamensal rhythm.[7] A woman's basal body temperature rises sharply after ovulation, as estrogen production decreases and progesterone increases. Fertility awareness programs use this predictable change to identify when a woman is able to become pregnant. During the luteal phase of the menstrual cycle, both the lowest and the average temperatures are slightly higher than during other parts of the cycle. However, the amount that the temperature rises during each day is slightly lower than typical, so the highest temperature of the day is not very much higher than usual.[6] Hormonal contraceptives both suppress the circamensal rhythm and raise the typical body temperature by about 0.6 °C (1.1 °F).[7]

Temperature also varies with the change of seasons during each year. This pattern is called a circannual rhythm.[6] Studies of seasonal variations have produced inconsistent results. People living in different climates may have different seasonal patterns.

With increased age, both average body temperature and the amount of daily variability in the body temperature tend to decrease.[6] Elderly patients may have a decreased ability to generate body heat during a fever, so even a somewhat elevated temperature can indicate a serious underlying cause in geriatrics.

Variations due to measurement methods

Generally, oral, rectal, gut, and core body temperatures, although slightly different, are well-correlated, with oral temperature being the lowest of the four.

Variations due to outside factors

Many outside factors affect the measured temperature as well. "Normal" values are generally given for an otherwise healthy, non-fasting adult, dressed comfortably, indoors, in a room that is kept at a normal room temperature (22.7 to 24.4 °C or 73 to 76 °F), during the morning, but not shortly after arising from sleep. Furthermore, for oral temperatures, the subject must not have eaten, drunk, or smoked anything in at least the previous fifteen to twenty minutes, as the temperature of the food, drink, or smoke can dramatically affect the reading.

A temperature setpoint is the level at which the body attempts to maintain its temperature. When the setpoint is raised, the result is a fever. Most fevers are caused by infectious disease and can be lowered, if desired, with antipyretic medications.

An organism at optimum temperature is considered afebrile or apyrexic, meaning "without fever". If temperature is raised, but the setpoint is not raised, then the result is hyperthermia.

Hyperthermia occurs when the body produces or absorbs more heat than it can dissipate. It is usually caused by prolonged exposure to high temperatures. The heat-regulating mechanisms of the body eventually become overwhelmed and unable to deal effectively with the heat, causing the body temperature to climb uncontrollably. Hyperthermia at or above about 40 °C (104 °F) is a life-threatening medical emergency that requires immediate treatment. Common symptoms include headache, confusion, and fatigue. If sweating has resulted in dehydration, then the affected person may have dry, red skin.

In a medical setting, mild hyperthermia is commonly called heat exhaustion or heat prostration; severe hyperthermia is called heat stroke. Heat stroke may come on suddenly, but it usually follows the untreated milder stages. Treatment involves cooling and rehydrating the body; fever-reducing drugs are useless for this condition. This may be done through moving out of direct sunlight to a cooler and shaded environment, drinking water, removing clothing that might keep heat close to the body, or sitting in front of a fan. Bathing in tepid or cool water, or even just washing the face and other exposed areas of the skin, can be helpful.

In hypothermia, body temperature drops below that required for normal metabolism and bodily functions. In humans, this is usually due to excessive exposure to cold air or water, but it can be deliberately induced as a medical treatment. Symptoms usually appear when the body's core temperature drops by 1-2 °C (1.8-3.6 °F) below normal temperature.

Basal body temperature is the lowest temperature attained by the body during rest (usually during sleep). It is generally measured immediately after awakening and before any physical activity has been undertaken, although the temperature measured at that time is somewhat higher than the true basal body temperature. In women, temperature differs at various points in the menstrual cycle, and this can be used for family planning.

Core temperature, also called core body temperature, is the operating temperature of an organism, specifically in deep structures of the body such as the liver, in comparison to temperatures of peripheral tissues. Core temperature is normally maintained within a narrow range so that essential enzymatic reactions can occur. Significant core temperature elevation (hyperthermia) or depression (hypothermia) that is prolonged for more than a brief period of time is incompatible with human life.

Temperature examination in the rectum is the traditional gold standard measurement used to estimate core temperature (oral temperature is affected by hot or cold drinks and mouth-breathing). Rectal temperature is expected to be approximately one Fahrenheit degree higher than an oral temperature taken on the same person at the same time. Ear thermometers measure eardrum temperature using infrared sensors. The blood supply to the tympanic membrane is shared with the brain. However, this method of measuring body temperature is not as accurate as rectal measurement and has a low sensitivity for fevers, missing three or four out of every ten fevers in children.[9] Ear temperature measurement may be acceptable for observing trends in body temperature but is less useful in consistently identifying fevers.

Until recently, direct measurement of core body temperature required surgical insertion of a probe, so a variety of indirect methods have commonly been used. While the rectal or vaginal temperature is generally considered to give the most accurate assessment of core body temperature, particularly in hypothermia, its recording is disliked by patients and medical staff alike. In the early 2000s, ingestible thermistors in capsule form were produced, allowing the temperature inside the digestive tract to be transmitted to an external receiver; one study found that these were comparable in accuracy to rectal temperature measurement.[10]

A medical/clinical thermometer showing the temperature of 38.7 °C

Taking a patient's temperature is an initial part of a full clinical examination. Sites used for measurement include:

The temperature reading depends on which part of the body is being measured. The typical daytime temperatures among healthy adults are as follows:

The temporal artery is close to the surface of the skin and therefore accessible for reading. The temporal artery is linked to the heart by the carotid artery which is directly linked to the aorta. It forms part of the main trunk of the arterial system. So long as the patient’s blood flow is permanent and regular, the method allows precise measurement of the temperature.

There is a risk of injury from cracking the original glass thermometers if too much force is applied by the teeth to hold them in place and the alcohol or mercury contents are poisonous. This is avoided by the use of electronic thermometers which are made from solid plastic and use a metal (thermocouple) sensor.

Since the year 2000, small ear thermometers have become available and it is thought that the eardrum closely mirrors core temperature values. These work by detecting the infrared heat emission from the tympanic membrane and a measurement is quickly taken within one second making them popular for use with children. While the electronic display of the temperature value is easier to read than interpreting the graduation marks on a thermometer, there are some concerns for the accuracy of ear thermometers in home use.[11]