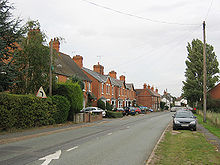 A southern part of Salford Priors

Salford Priors is a rural, agricultural village and civil parish about six miles south-west of Alcester, Warwickshire, England. It is on the Warwickshire border with Worcestershire.

The village is eight miles from the popular tourist town of Stratford upon Avon, the birthplace of William Shakespeare and the River Avon runs near to it. Evesham lies seven miles to the south-west and is an important agricultural centre and soft fruit-growing area.

The population of the Salford Priors ward - which includes the communities of Abbot's Salford, Dunnington, Iron Cross, Pitchill, Rushford and Mudwalls was 1,492 according to the 2001 census

The village has a number of areas designated as conservation areas. The village is popular with tourists and photographers especially in the summer when it is full of flowers paid for by Salford Priors Parish Council. The village also recently won Warwickshire Village of the Year, for its services and beauty[citation needed] 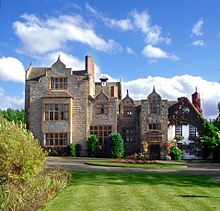 Salford Hall in Salford Abbots belonged first to Evesham Abbey, then to Kenilworth Priory, whose history is traceable back to A.D. 708, until the Dissolution of the Monasteries after which it became a seat of the Stanford family. It is now a hotel. The village used to have a railway station, opened in September 1866 on the Redditch to Ashchurch line. However the station closed in September 1963 as a result of the Beeching Axe.

The Norman-constructed St. Matthew's Church sits at the bottom of the village and is mentioned in the Domesday Book. The church has regular services and social meetings. The church is also very closely linked with the local school.

The local school is Salford Priors Church of England Primary School which admits children from the ages of 5-11. The school was originally founded in 1656 by William Perkins as a Free School for all of the children of the parish.

There are three pubs (The Queens Head, The Bell at Salford Priors and The Vineyard) and a post office in the parish. The Bell reopened in July 2009 after being shut for many months after a major refurbishment; in 2011 the Bell developed a luxury super king-size en-suite holiday apartment. For gliding enthusiasts there is an airfield two miles from Salford Priors where national and international gliding competitions are hosted.

Two large businesses located in the village are both connected with the agricultural industry. One, Spearhead Machinery, makes agricultural machinery which is sold worldwide and the other is a large farm produce grower and packer that supplies many of the large supermarkets in the UK.