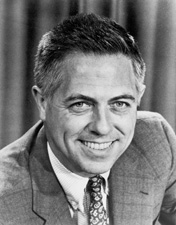 He was also the lead in a landmark Supreme Court case, "", in which he successfully challenged the of a law limiting campaign spending in Congressional races.

In 1970 he was elected to the U.S. Senate as a member of the , winning 38.7 percent of the vote in a three-way race, and served from 1971 until 1977. To date he has been the only member of his party, and the last member of a third party, elected to the U.S. Senate. [Independents , and , and Minnesota Independence Party's , who was appointed for less than three months, are not included.]

Buckley was born in New York City to lawyer and businessman , of Irish-Catholic descent, and , a Southerner of Swiss-German descent. He is the older brother of conservative writer and the uncle of . He is also the uncle of Brent Bozell. A 1943 graduate of , where he was a member of [, "Secrets of the Tomb: Skull and Bones, the Ivy League, and the Hidden Paths of Power", Little, Brown and Company, 2002, page 168, 174] ["People in the News", , May 27, 1983] [Bob Dart, "Skull and bones a secret shared by Bush, Kerry", "The Gazette", March 7, 2004] , Buckley enlisted in the in 1942 and was discharged with the rank of in 1946. After receiving his degree from , he was admitted to the bar in 1950 and practiced law until 1953, when he joined Catawba as vice president and director. Buckley is married to Ann Cooley Buckley and resides in and .

In 1968, Buckley challenged liberal Republican Senator for re-election. Javits won easily, but Buckley received a large number of votes from disaffected Republicans, and in 1970, ran for the U.S. Senate against liberal Republican incumbent . Goodell had been appointed to the Senate by New York Governor following the assassination of Senator and had made a name for himself in the Senate as an opponent of the . Buckley's campaign slogan, plastered on billboards statewide, was "Isn't it time we had a Senator?" [ [http://www.chicagotribune.com/news/opinion/chi-0703150099mar15,1,850637.column Topic Galleries - chicagotribune.com ] ]

With Goodell and the Democratic nominee, , splitting the liberal vote, Buckley won a (38 percent) and entered the Senate in January 1971.

In 1974, he proposed a "human life" amendment, which defined the term "person" in the to include the embryo.

In his 1976 re-election bid, with Rockefeller's liberal GOP faction falling apart, Buckley received the Republican nomination. Initially, he was favored for re-election, because the frontrunner in the crowded Democratic field was Congresswoman , a liberal reviled by the right. But when , the U.S. Ambassador to the , made a late entrance into the Democratic primary and narrowly defeated Abzug, Buckley could no longer count on getting the votes of Democrats. Moynihan went on to defeat Buckley by a wide margin.

After his loss, Buckley moved to , and in 1980 received the Republican nomination for the Senate seat being vacated by the retirement of . He lost the general election to , who still serves in the Senate.

He was the last Senator to be elected from a party other than the Democrats or Republicans. Since 1974, three independent candidates ( of and of Connecticut in 2006, and of Virginia in 1976) have been elected, but no minor-party candidates have won election to the Senate.

During the , then-Senator encouraged a "Draft Buckley" movement, as an effort to stop the nomination of for President. Reagan had announced that Senator would be his running-mate if picked; Helms believed that Schweiker was too liberal. The "Draft Buckley" movement was mooted when President very narrowly won the party's nomination on the first ballot. ["World Almanac and Book of Facts 1977] [>http://openweb.tvnews.vanderbilt.edu/1976-8/1976-08-11-NBC-2.html]