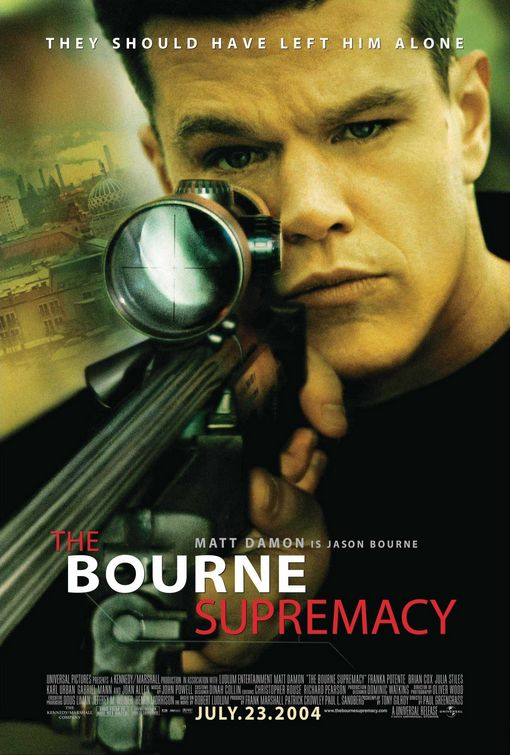 "The Bourne Supremacy" is a 2004 spy mystery loosely based on the novel of the same name. The film was directed by , written by and [ [http://www.imdb.com/title/tt0372183/ The Bourne Supremacy (2004) ] ] and produced by and Frank Marshall. released the film to theaters in the on , and it received a positive critical and public reaction similar to its predecessor, "The Bourne Identity". The film is followed by a 2007 sequel entitled "The Bourne Ultimatum".

"The Bourne Supremacy" continues the story of Jason Bourne, an c and former assassin played by , and his attempt to learn more of his shadowy past as he is once more enveloped in a conspiracy surrounding the CIA and . The film also stars as Marie Helena Kreutz, as Ward Abbott, as Pamela Landy and as Nicolette Parsons.

It substantially deviates from its source material as Alexander Conklin is now dead and the is Bourne's enemy rather than his friend (the plot actually incorporates aspects of the Bourne novel "" written by as well). In addition, the book's narrative takes place in with Marie getting kidnapped so Bourne will accept a mission.

Two years after the events in "The Bourne Identity", Bourne and his , , are living in . Bourne is having flashbacks of an assassination in a hotel. Meanwhile, in Berlin, a CIA officer under Deputy Director Pamela Landy is trading 3 million for the complete "Neski Files," documents concerning the theft of $20 million from the CIA, seven years earlier. They are to complete the exchange in an office building in Berlin. During the exchange, an assassin named Kirill plants Jason Bourne's fingerprint on a bomb in the building's basement and proceeds to kill the agent and the source, stealing the files and money. He sells them to Russian oil magnate Yuri Gretkov.

Kirill travels to Goa in order to kill Bourne, but Bourne spots him and flees with Marie. Just as Bourne and Marie are driving away, Kirill, armed with a sniper rifle, fires at the driver whom he believes to be Bourne but is in fact Marie, killing her and causing the car to veer off the bridge into a river. Kirill leaves, believing that he killed Bourne, but he manages to swim away undetected. Bourne leaves for , , with money and passports in an attempt to learn why he is again being targeted, believing that Treadstone is pursuing him.

In , Landy's team finds the planted and, upon running it through the , finds that the identity of the person in question was part of Treadstone and information regarding it is restricted by the . Landy then flies to CIA headquarters in to meet with her boss and to find out about Treadstone and who left the print. She discovers that they belong to Bourne and questions Ward Abbott about Treadstone. He admits that he had Conklin killed after a failed mission, but has no idea where Bourne is. Landy tells Abbott that the CIA agent who stole the $20 million was named in the stolen files. A n , Vladimir Neski, was due to identify the thief. Before he could do so, however, Neski was apparently murdered by his wife in a Berlin hotel, who then committed suicide afterwards. Landy believes that Bourne and Conklin were involved in the theft, and, based on the discovered fingerprint, that Bourne was responsible for the deaths of the CIA officer and source in Berlin. Both Abbott and Landy go to Berlin, hoping to find some trace of Bourne and capture him.

Arriving in , Bourne deliberately uses a known passport under his name. Agents in Langley are notified of Bourne's arrival, and he is detained. He incapacitates an Italian officer and his CIA interrogator, copies the agent's SIM card on his own , then escapes. Bourne listens in on a call from Landy, learning her name, phone number, and that he is suspected of the recent killings in Berlin. He steals a car and heads to . In , he breaks into another Treadstone agent's house. Upon arrival, the agent, Jarda, tells him Treadstone was shut down following Conklin's death; he and Bourne are the only remnants of the project. As Bourne realizes Jarda has called in backup, Jarda attacks, the two struggle, and Bourne kills Jarda. Bourne sets a trap by opening a gas line and jamming a magazine into a toaster; the home explodes when backup arrives.

In , Landy and Abbott intercept and debrief Nicky Parsons, Treadstone's handler in . Bourne follows them from a hotel to a CIA office in . Armed with a from a neighboring roof, Bourne calls Landy's phone, questioning her intentions. She tells him it is because he killed two people in Berlin. Although Landy is referring to the agents, he thinks she is referring to Neski and his wife. Bourne arranges to meet Nicky at the , where he uses a crowded anti-capitalist protest to evade surveillance. He leads Nicky to the subway station and interrogates her, learning that Abbott was the head of Treadstone, not Conklin. Bourne's flashbacks of Neski's assassination at the Brecker Hotel return, but Nicky knows nothing about the Neski killing. Upon hearing their conversation over Nicky's transmitter, Landy begins to believe that Bourne is being framed. To the surprise of Landy and Abbott, Bourne lets Nicky go unharmed. Back at the office, Abbott's associate Danny Zorn becomes positive Bourne is being framed after examining the basement where the bomb with Bourne's fingerprint was found. After revealing his belief to Abbott, Abbott stabs him, revealing his involvement in the conspiracy.

Bourne revisits the in Berlin and remembers more of the Neski mission. He was sent to kill Neski on Conklin's orders; and when Neski's wife unexpectedly showed up, he shot him and then her, positioning the scene to appear a . The German police arrive after the hotel's lobby report Bourne as wanted, which interrupts Bourne's flashback and forces him to escape via the building's exterior. Having evaded them, Bourne breaks into Abbott's hotel room and records a conversation between him and Gretkov that incriminates Abbott and Gretkov in the theft of the money. Abbott also confesses that he ordered Bourne killed (Marie was not the intended target), Neski's murder by Bourne, the murder of the agents by Kirill, and the planted fingerprint at the scene. Out of respect for Marie's beliefs in non-violence, Bourne spares Abbott's life. Zorn's body is discovered at the office and Landy, realizing Abbott killed him, goes to confront Abbott, who commits suicide. Landy later receives the tape Bourne recorded.

Bourne travels to , where he is shot and wounded by Kirill. After an extended high-speed chase through Moscow, Bourne forces Kirill to crash in a tunnel, which kills him. Gretkov is arrested by Russian police after Landy provides them with the evidence she got from Bourne. Bourne proceeds to the apartment of Irena Neski, Vladimir Neski's daughter, where he informs her that her mother did not kill her father and then commit suicide; Bourne had killed them both on a mission gone wrong, and he apologizes.

The final scene jumps to , in a scene that was reshot for and featured about 2/3rds into the The Bourne Ultimatum in a completely different context and relaying different information within the same dialog and acting. Bourne contacts Landy by , asking why the CIA is still looking for him. Landy then thanks Bourne for supplying the tape, which the CIA has used to settle matters concerning his frame-up. Before Bourne hangs up, Landy reveals to Bourne that his real name is David Webb and that he was born on "4/15/71". When she suggests that Bourne come in to discuss the matter, Bourne declines by simply stating, "Get some rest, Pam; you look tired." Bourne fades into a New York City crowd just before the credits roll.

* as Jason Bourne: an amnesiac and former assassin of the CIA's Operation Treadstone.
* as Pamela Landy: a CIA Deputy Director and Task Force Chief, pursues Bourne after her operation goes badly.
* as Ward Abbott: a CIA Deputy Director formerly in charge of Treadstone.
* as : formerly Bourne's Treadstone contact, she is taken from her post-Treadstone assignment to assist in the search for Bourne.
* as Kirill: a Russian secret service agent and an expert assassin who is working for Gretkov.
* as Gretkov: Kirill's employer.
* as Marie Helena Kreutz: Bourne's girlfriend.
*Gabriel Mann as Danny Zorn: formerly assigned to Treadstone headquarters, is now on Abbott's staff.
* as Martin Marshall: CIA Director.
* as Tom Cronin: Landy's righthand agent.
* as Kim: Landy's number two agent.
* as Irena Neski: daughter of politician Vladimir Neski, whom Bourne killed.
* as Jarda: the last surviving member of Operation Treadstone.

The DVD contains an alternate ending for the film. It has Bourne collapsing in the Moscow park after confessing to Neski's daughter, waking up in a hospital, and being told his real name by Landy, before he escapes.