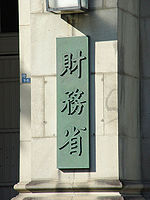 The Ministry of Finance (財務省, Zaimu-shō?) is one of cabinet-level ministries of the Japanese government. The ministry was once named Ōkura-shō (大蔵省). The Ministry is headed by the Minister of Finance (Zaimu-daijin; 財務大臣), who is a member of the Cabinet and is typically chosen from members of the Diet by the Prime Minister.

The Ministry's origin was back in the 6th century, when Ōkura (大蔵) was established as a state treasury in ancient Japan. When a modern system of government was introduced after the Meiji Restoration, the Ministry of Finance (大蔵省; Ōkura-shō) was established as a government body in charge of public finance and monetary affairs. It is said that new ministry employees are subtly reminded that the Ōkura-shō predates by some 1269 years the Nihon Koku Kempo (New Constitution) imposed on the nation by the U.S. occupation forces in 1947.[1]

The Ministry has long been regarded as the most powerful ministry in the Japanese government. After various financial scandals revealed in the 1990s, however, the Ministry lost its power over banking supervision to a newly-established Financial Services Agency. It also lost most of its control over monetary policy to the Bank of Japan when the Diet passed a new Bank of Japan Law in 1998. In addition, it lost its ancient Japanese name in January 2001, to be renamed as Zaimu-shō (財務省), although its English name remained the same.

Despite this renaming, the Japanese people still use a slang term Ōkura-daijin (大蔵大臣), meaning a person controlling a budget (e.g. housewives for family budget matters).

In financial markets, the Ministry is famous for its active foreign exchange policy. Its top civil servant on the international side, Vice Minister of Finance for International Affairs, is often quoted in the financial press. Former Vice Minister Eisuke Sakakibara was known as "Mr Yen", whereas his successors Haruhiko Kuroda and Zembei Mizoguchi were often referred to as "Mr Asian Currency" and "Mr Dollar", respectively.

The current Minister of Finance is Jun Azumi.

Six Independent Administrative Institutions are under the Ministry's control.