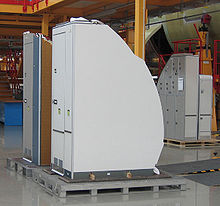 The Mile High Club (or MHC) is a slang term applied collectively to individuals who have sex while on board an aircraft in flight. There is no known formally constituted club so named. However, since "membership" of the "club" is really a matter of an individual asserting they have qualified, the qualifications for membership are open to some interpretation.[1]

One explanation for the club's allure is the vibration of the plane, which may make arousal easier.[2] Others say they have fantasies about pilots or flight attendants, or a fetish about planes themselves.[3] For many others, perhaps the majority, the appeal of joining the MHC is the thrill of doing something taboo and the thrill of the risk of being discovered.[4]

The American transportation authority NTSB reports a case in which sexual activity is at least partly responsible for an aviation accident.[8]

In November 2007, the BBC reported a story headlined "Airline Bans A380 Mile-High Club" about a measure taken by Singapore Airlines. The airline asked their first class passengers shortly after the introduction of their new Airbus A380 to respect the other passengers. The twelve first class cabins have double beds, but are not soundproof.[9]

Some incidents of people attempting sexual activity on planes have become popularly known:

The BBC ran an article investigating whether sex on a plane was legal. Their conclusion was that it would depend on many factors, such as whether or not the act occurred in sight of others. If British law applied, for example, it may constitute sex in lavatory to which the public has access, contrary to Sexual Offences Act 2003 s.71, with a maximum 6-month term.

Also, for international flights, the law could vary depending on departure and destination cities, where the aircraft was overflying at the time, and the nation of the carrier airline.[19]

In January 2011, the United Kingdom's aviation regulator body, the Civil Aviation Authority (CAA), refused to recertify Mile High Flights, an air charter company located in Gloucestershire, a county in South West England for allowing its passengers to have sex while in-flight.[20]

Some commercial enterprises cash in on people's interest in joining the club by offering special charter[21] flights designed for the purpose[22] or by selling souvenir certificates and other items.[23] Some web sites also provide resources such as historical information about the club.