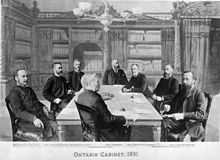 The Executive Council of Ontario (informally, and more commonly, the Cabinet of Ontario) plays an important role in the Government of Ontario, in accordance with the Westminster system.

Most cabinet ministers are the head of a ministry, but this is not always the case. The Lieutenant Governor, advised by the Premier, determines which portfolios will be created. It is then up to the new minister to organize his or her department, and to present legislation for the new ministry if none exists.

The current cabinet was most recently shuffled on October 20, 2011.