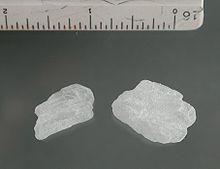 Methamphetamine is the drug most associated with the term "party and play".

Party and play (PNP or PnP), also known as a chemical session, chem session, or simply as partying, is a phenomenon and subculture of recreational drug users who play together sexually, either one-on-one or in groups.[citation needed]

Men interested in PNP typically meet through other drug users or through Internet dating sites[citation needed]. On such sites, men often include notations such as "PNP" or the reverse, "No PNP". Some sites, such as Manhunt.net, prohibit members from saying that they want PNP or making other positive references to drug use.[citation needed]

Craigslist.org has the same policy but it is seldom enforced; users often advertise they are willing to provide favors or party favors[3] to prospective partners. Internet posts by men seeking pNp experiences often resort to slang to identify what drug they are partying with.[citation needed]

As stimulant drugs such as methamphetamine drastically delay the need for sleep and tend to inhibit ejaculation, PNP sexual encounters can continue for many hours--a typical methamphetamine high lasts about eight hours--or even for several days if multiple doses are taken (however in this case the comedown is correspondingly more severe). These drugs tend to inhibit penile erection, a phenomenon known by the slang term crystal dick. Consequently, many men who engage in PNP use erectile dysfunction drugs such as sildenafil, vardenafil, and tadalafil.[4]

Besides the inherent risks involved with drug use, health officials have found a strong correlation between drug use and unsafe sex practices.[5]

As such, PNP practices are cited as the cause of rising HIV rates in the gay and bisexual male community and other men who have sex with men.[6] San Francisco's STOP Aids Project and the Mayor of San Francisco's Crystal Meth Task Force have reduced methamphetamine use from 18% in 2003 to 10% in 2005 of gay and bisexual San Franciscans PNPing. The STOP AIDS Project has been heavily involved due to the common link between methamphetamine use and sex—PNPing.[citation needed]

The same drug-induced loss of inhibitions makes PNP enthusiasts more vulnerable to more immediate threats, such as robbery, date rape, or assault by someone whom they meet for sex.[citation needed]

Methamphetamine can cause sores and abrasions in the mouth which can turn typically low HIV risk sex acts such as oral sex into very high risk sexual activity and transmit HIV.[9]