Location of the archaeological finds of the Ordos culture.

The Ordos culture comprises the period from Upper Paleolithic to the late Bronze age at the Ordos Desert, in the south of the Inner Mongolian Autonomous Region of the People's Republic of China. The Ordos were predominantly Mongoloid, as known from their skeletal remains and artifacts,[1] but numerous interactions between Europoid and Mongoloid might have also taken place in that region over the course of several centuries,[2] until its occupation by Qin and Han dynasties.

The Ordos culture is documented from the Upper Palaeolithic. The points and sides of their tools indicate a "Moustero-Levalloisian" element. They seemed to have a masterful knowledge of Upper Palaeolithic technology, producing blades as much as fifteen centimeters long.[3]

The human fossil remains of the Ordos Man from Salawusu site dated between 50,000 and 35,000 BCE show strong Mongoloid features, specifically on the fore-tooth and occipital bone.[4]

The Zhukaigou culture is one of the neolithic cultures at Ordos, dated between 2200 and 1500 BCE. It contained about 327 burials, recent genetic evidence shown that they were related to the remains from Yinniugou, as well as modern populations like Daurs and Evenks.[5] The archaeological finds at the site is similar to those of the lower Xiajiadian culture. Those finds are important as it was responsible for the development of snake pattern design on the decoration of weapon and depicting animal artifact, known in later as the Ordos style.[6] 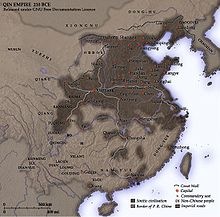 The Ordos people were located at the doorstep of Qin China, and were just east of the Yuezhi in the 3rd century BCE.

The people in Ordos are recorded in the area of the Ordos desert from the 6th to the 2nd century BCE. What kind of populations occupied the area before them is unclear, but may have been Mongoloid.

The skeletal remains at Taohongbala (桃紅巴拉) tomb dated to between 7th and 6th century BCE are generally identified as belonging to the Xiongnu bronze culture, and show strong Mongoloid features.[7][8]

A similar type of burial at Hulusitai around Bayannur uncovered in 1979, which is dated to between 5th to 4th century BCE, is considered as the only Xiongnu's culture situated at the northern slope of Yinshan. The site consisted of mainly bronze artifacts and pottery and 27 horse skeletal remains.[9] Further excavation in 1983 at Guoxianyaozi amounting to a total of 31 burials dated to about 6th to 5th century BCE, showed strong north Mongoloid. Those features generally decreased towards the south, and skeletal remains of east and north Mongoloid can be seen from the finds in Maoqinggou and Yinniugou dated to around 7th century BCE, which amount to a total of 117 burials.[10] Many bronze weapons of those cultures are similar to those of Chinese style.[11] 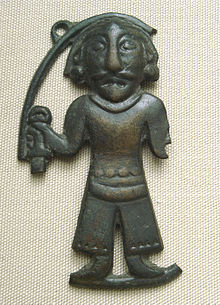 Later, horse nomads occupied the area from the 6th to the 2nd century BCE before being driven away by the Xiongnu. According to Lebedynsky, they are thought to be the easternmost people of Scythian affinity to have settled here, just to the east of the better-known Yuezhi.[13] They are mainly known from their skeletal remains and artifacts.

They were in contact and often at war with the pre-Han and Han populations of the period. Their former territory is now located just north of the Great Wall of China, and on the south bank of the northernmost hook of the Yellow river.

According to Lebedynsky, the people represented in archaeological finds tend to display Europoïd features, and are thought to be of Scythian affinity.[14] The weapons, found in tombs throughout the steppes of the Ordos, are very close to those of the Scythians, especially the Sakas.[15]

The Ordos people manufactured belt plaques, horse gear and weapons depicting animals, often in combat. The "animal-style" is similar to nomadic traditions found in Central Asia, such as that of the Scythians.

The neighbours of Ordos may have been identical with the Yuezhi who, after being vanquished by the Xiongnu, migrated to southern Asia to form the Kushan empire. They were also culturally related to another nomadic tribe to the east, the Eastern Hu (Chinese:東胡, "Donghu"), who shared a similar "art of the steppes" but appear to have been Mongoloids.[16] They may also have been related to the Di people (Chinese:氐 "Western Barbarians") of Chinese annals.

By one account, the area of Ordos was the legendary original land of the Turks.

In Chinese accounts, the Xiongnu first appear at Ordos in the Yizhoushu and Shanhaijing during the Warring States Period before it was occupied by Qin and Zhao. It is generally thought to be their homeland, however when exactly they came to occupy the region is unclear, and it might have been much earlier than traditionally thought, as suggested by archaeological finds.[17]

As the Xiongnu expanded southward into Yuezhi territory around 160 BCE under their leader Modun, the Yuezhi in turn defeated the Sakas and pushed them away at the Issyk Kul. It is thought the Xiongnu also occupied the Ordos area during the same period, when they came in direct contact with the Chinese. From there, the Xiongnu conducted numerous devastating raids into Chinese territory (167, 158, 142, 129 BCE).[18]

The Han Dynasty started to fight the Xiongnu in the 2nd century BCE under emperor Han Wudi, and colonized the area of the Ordos under Shuofang commandery in 127 BCE. Prior to the campaign, there were already commanderies established earlier by Qin and Zhao until they were overrun by the Xiongnu in 209 BCE.[19]

Main artifacts of the Ordos people, as displayed in the British Museum (Asian Gallery):