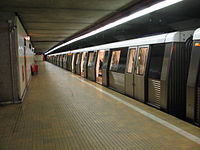 Movia is a family of metro train built by Bombardier Transportation. The structure and body shell are fully customisable for the needs of each system that orders it. Unlike most traditional metro trains, they usually have full-width gangways between carriages, allowing passengers to walk the entire length of the train. The design was developed by Adtranz which was acquired by Bombardier in 2001.

Guangzhou Metro, Shanghai Metro, and Shenzhen Metro all use Movia 456 trains, while Bucharest Metro use the Movia 346. Movia trains are on order and entering service for the London Underground (designated S Stock and 2009 Stock), Toronto Subway (designated Toronto Rocket), and Delhi Metro. Singapore MRT has accepted an order of C951 trains.

Interior of the Toronto Rocket, showing its articulation joint 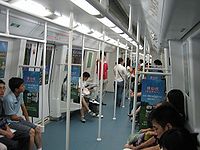 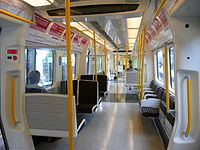 Interior of a Movia S Stock carriage for London Underground