The Malta Medical Students' Association (MMSA) is one of the oldest student associations found at the University of Malta, established in 1951. All students in the faculty of Medicine and Surgery, including post-graduate students but excluding Pharmacy students, are automatic members of this association.

MMSA is a non-governmental, non-political student organization that has been established 60 years ago. MMSA has its foundation at the University of Malta where it has been the most active student organization for the past 10 years. It is a full member of the International Federation of Medical Students’ Associations (IFMSA) and European Medical Students’ Associations (EMSA). As part of IFMSA, it enjoys international status amongst 97 National Member Organizations encompassing over one million medical students globally. MMSA is also affiliated locally with the National Council of Women and supported actively by the Health Promotion Department.

“Our mission is to enhance the education of future medical professionals through enforcing active participation in their teaching system, organizing international exchanges and implementing training in the various fields of the public health sector. We also aim at empowering the Maltese society, including its marginalized communities, to become functionally involved in decision taking within the National Healthcare System and to reduce health-related social problems through culture and gender sensitive health advocacy.”

1. Empowering medical students in applying their knowledge and capacities to be actively involved in decision-making with regards to the teaching system and to the enhancement of society.

2. Promote and facilitate professional and scientific exchanges as well as projects and extracurricular training for medical students, thereby sensitizing them to other cultures and societies and their health problems. Representing Maltese medical students at an international level through the International Federation of Medical Students’ Association.

5. Ensure continuity in the programs developed and improvement through monitoring & evaluation as per the statute guidelines Play an active role in formulating youth charters with respect to the various aspects of public health. Endorsing relevant publications.

All students of the Faculty of Medicine and Surgery, barring Pharmacy Students, are members of MMSA. The MMSA is regulated by an Executive Board composed of 13 members, elected once a year by simple majority elections. MMSA has adopted the international structure at a national level so that it is constituted of six standing committees:

In addition to these standing committees, two further teams exist – Leisure team and the Media team.

Elections are held by MMSA on a yearly basis. On 23 March 2009, elections were held to elect the Executive Board for the 2009-2010 scholastic year. The posts of NEO and NORE no longer exist, and have been replaced by NEO/NORE-In and NEO/NORE-Out. The results are as follows 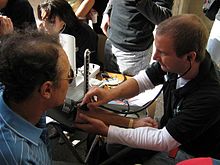 A medical student checking blood pressure on an awareness drive

As medical students, MMSA's members are at the forefront in the advocacy of public health and are active at the various levels of society both in age, gender and cultural divisions that exist. The goals are achieved through a multitude of activities that include:

i. World Diabetes Day – 14 November. This is an international event. In Malta it is held by the medical students in Valletta and the main acute hospital now at Mater Dei. Free Random Blood Glucose (RBG) testing is provided alongside information regarding Diabetes.

ii. Blood Donation Campaign – bi-annually in November and March. These both last three days and are held on university campus. The event is aimed at University students, Msida residents, healthcare professionals and hospital visitors. The usual criteria for blood donation are employed and a doctor is present for blood taking.

iii. Teddy Bear Hospital Project – this is a project that was established first within EMSA. It was adopted in Malta 5 years ago. It entails a group of medical students attending various primary schools and enhances approachability between patient and doctor through an educational outreach to young children.

iv. Awareness Campaigns – a number of these are organized annually, constituting an anti-smoking campaign and focus on nutrition & exercise. These campaigns involve various different activities including publications, press releases, non-smoking parties, awareness stands and dissemination of information through conferences and peer education sessions.

v. FOOD (Focused on Obesity and Diabetes) Campaign - a project that is aimed towards increasing awareness about health eating, fitness and exercise. This entails a group of medical students attending various primary schools and educating them about the importance of an overall healthy lifestyle.

vi. World Heart Day - This is organised in the last weekend of September, and is another international event, which is commemorated by the Medical Students.

vii. Healthfest - This is an event in which NPET, SCOPH and SCORP come together to educate the public about the importance of leading a healthy lifestyle as well as the downfalls of eating disorders, smoking, drug and alcohol abuse. Free Random Blood Glucose (RBG) testing is provided alongside information regarding Diabetes. A water campaign is also held to increase the awareness of the importance of drinking water, and that some other countries might not be so fortunate as to have easy access to fresh water.

i. World AIDS Day Campaign – 1 December. This is an international event. In Malta a week of various events are organized including outreaches, concert, a candle vigil, "Piazza Cafe" and various information stands.

ii. Men’s Day – 7 February. This event is held on the three major campuses in Malta where information regarding male reproductive cancers is disseminated in an interactive manner between medical students and other students. Bookmarks with relevant information are also placed in prominent bookstores around the island.

iv. The Genital Affair – held annually towards the end of April, it has become a very successful theatrical performance that is amongst the first to encompass theatre-based peer education in Europe.

v. SexEd – this is the freshest project within MMSA. It is a sexual peer education project that is currently being established. It aims to target a minimum of twenty secondary government, church and private schools dispersed over both Malta and Gozo. This precludes the participation of medical students, psychology students and students from the Institute of HealthCare.

vi. The IVF Campaign - Launched in 2011, this campaign aims to increase the awareness about IVF amongst the public.

Migration is today’s issue. It has brought along with it a great strain on the Maltese National Healthcare System due to drug resistant infections and also the emergence of tropical infections that were previously rarely encountered in local hospitals. The standing committee on human rights and peace aims to enhance the well being of the ethnic minorities and marginalized people of community by advocating informed, health-oriented decisions in both the minorities and their social workers/guards/protégées.

i. Human Rights Campaign – 10 December. This is international Human Rights Day. A whole week of various events is organized including awareness campaigns and conferences in collaboration with Amnesty International Malta. An innovative event organized in the past year was an art exhibition at St. James Cavalier of drawings done by refugee and Maltese children to highlight the irrelevance of race.

ii. Women’s Day – 8 March. Women living at the detention centers and the refugee camps around the island are given a flower. Collaboration with Amnesty International Malta in conferences to Stop Violence Against Women (SVAW) has been established.

iii. English Teaching Project – this project has been established for the past 6 years. Refugees and illegal migrants are offered weekly English lessons to improve communication between local and migrant. This is also vital in the healthcare sector as lack of communication may result in misdiagnosis and mistreatment of potentially infectious or lethal diseases.

iv. Water Campaign - First set up in 2011 conjoined with Healthfest, this campaign aims to increase the awareness of the importance of drinking water, and that some other countries might not be so fortunate as to have easy access to fresh water.

This section of MMSA is purely targeted at future and current medics.

i. Career’s Convention – this is a yearly event that seeks to provide medical students and house officers with adequate information on all the possibilities available after they graduate – both local and foreign. ‘Brain Drain’ within the medical profession has been subject to a lot of debate in recent times and reform is being pushed for voraciously by MMSA.

ii. Medical Education Seminars – case presentations by house officers to all interested healthcare professionals interested are done fortnightly at the Medical School in Mater Dei Hospital. Further seminars are held to improve communication between students and the faculty.

This Standing Committee assists the student representative on Faculty Board to tackle academic problems which may arise.

A total of 144 of exchanges are organized throughout the summer months with an influx of 71 students and around 73 students going abroad to work in various hospitals globally. These provide for excellent interactive learning techniques that bring fresh ideas into the Maltese NHS. They also enhance the development of culture-sensitive healthcare professionals.

Apart from all the events that are organized by MMSA, the association also has its very own publications. These include press releases for each major event in the public health sector, reports for all the events and annual reports. MMSA also publishes an annual magazine called ‘Murmur’ that is distributed to all local and foreign healthcare professionals that amounts to a mailing list of around 250 medical staff. Together with ‘Murmur’, a quarterly digest called ‘Sphygmo’ is published for all medical and Institute of HealthCare students.

This team organizes parties, balls, football tournaments and paint ball games for all the university student body. The parties organized include:

i. End of Summer – held in the last week of September, this party is held in one of the beach resorts around Malta and aims to re-unite the estranged students after the summer prior to the beginning of the new scholastic year.

ii. MMSA Annual Ball - held at the tail-end of winter, the Ball is a success story every year attracting over 600 students.

iii. Christmas Party – a free-entrance party is held during the Christmas holidays on campus for all university students.

MMSA is a full member of both IFMSA and EMSA. It is also a very active contributor to the local KSU and KNZ, the local umbrella student organisations.