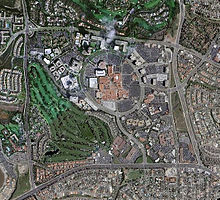 Satellite view of Newport Center, with Fashion Island in the middle of the image

Opened in 1967 as part of Newport Center, the mall featured four department stores: Buffum's, J. W. Robinson's, The Broadway, and J.C. Penney. These four initial buildings were designed by architects William Pereira and Welton Becket, and were flanked by several smaller stores. The Spanish architectural theme which would later define the mall was evident in the Robinson's building. In the late 1970s, Bullocks Wilshire (which later became I. Magnin) and Neiman Marcus were added. In the early 1980s, J.C. Penney moved out, and the building it occupied was reconstructed and reopened as "Atrium Court", which contained numerous smaller shops and a food court on the lower level.

The southwest entrance to Robinson's features a bronze wind-chime sculpture by mural artist Tom Van Sant, installed in September 1967, that was recorded by the Guinness Book of Records as the world's largest wind chime. (Possibly supplanted by Eureka Springs, Ark. in 2007.)

In 1988, the center underwent a major expansion and renovation based on the design of Jon Jerde, adding the Island Terrace Food Court, an eight-screen movie theater, and three new avenues of shops, all of which converge in a circular courtyard with an animated fountain that shoots jets of water up to 30 feet (9.1 m) high. This fountain is known as the "Iris Fountain" because of the radial-leaves pattern of its marble lining coupled with the jets of water that suggests the iris plant.

In 1990, the Bullocks Wilshire store became an I. Magnin. Federated Department Stores, which owned I. Magnin closed the chain in the mid 1990s, and the store was replaced with a Bullock's Women's Store. When Federated shuttered the Bullock's chain, the store was replaced again by Macy's as a Macy's Women's Store. Buffum's closed in 1991, and its space was later subdivided into smaller stores. After the consolidation of J. W. Robinson's and May Company California, the Robinson's store became a Robinsons-May in 1993. The Broadway, whose parent company had been purchased by Federated was done away with in 1996, and was replaced by one of the first Bloomingdale's stores on the West Coast.

In the early 2000s the mall underwent additional minor renovations resulting in the alteration and replacement of landscape elements, building facades, outdoor furniture ,and floor materials to better reflect the Mediterranean theme. Included in this renovation was the installment of a carousel and a new wing with restaurants and shops, although the carousel was removed in January 2010 as part of major renovations of the center.[1] [2]

The Federated-May merger in 2006, greatly affected Fashion Island, resulting in the closure and demolition of the 80,000 square feet (7,400 m2) Macy's Women's Store and conversion of the former Robinsons-May into a full-line Macy's store.

In 2009 the Irvine Company began a $100 million renovation of the mall and is changing the Spanish style to an Italian style. [4] [5]

The large courtyard outside the Bloomingdale's building is occupied annually by a large Christmas tree. About a week before Christmas, every year, the tree is lit, preceded by extravagant holiday performances. The trees are taken from a private timber area near Mount Shasta, and shipped to Fashion Island in several pieces, which are then re-assembled using steel rods and a large crane.[citation needed]

Since 1983, the tree at Fashion Island has generally been the nation's tallest.[6] The M Resort held this distinction for 2009.[7]