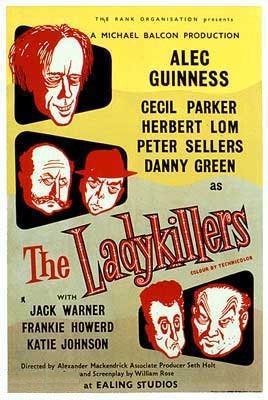 "The Ladykillers" is a 1955 British film. It is one of a series of classic post-war . Directed by , it stars , , , , Danny Green, Jack Warner and . American William Rose wrote the screenplay, for which he was nominated for an and won the . He claimed to have dreamt the entire movie and merely had to remember the details when he awoke.

A comically sinister criminal, "Professor" Marcus (Guinness), rents rooms in the gradually subsiding "lopsided" King's Cross house of an innocent and eccentric old lady, Mrs Louisa Wilberforce (Johnson), a widow who lives alone with her parrots. The Professor has put together a gang for a sophisticated armoured car robbery: the gentlemanly con-man "Major" Courtney (Parker), the Cockney Harry Robinson (Sellers), the slow-witted ex-boxer "One-Round" Lawson (Green), and the vicious continental gangster Louis Harvey (Lom). However, the Professor convinces Mrs Wilberforce that they are an amateur string quintet using the room for rehearsal space. To maintain the deception, the gang members carry musical instruments and play a recording of 's Minuet (3rd movement) from String Quintet in E, Op. 13 No. 5 during their planning sessions.

After the successful heist, in which Mrs Wilberforce plays an unwitting but crucial role by escorting the loot through the police cordon, the real conflict of the film begins. As the gang leaves her house, One-Round accidentally drops his cello case full of banknotes. As they spill out in front of Mrs Wilberforce, she realises the truth and informs Marcus that she is going to report them to the police.

The gang, it seems, has no choice but to do away with her. No one wants to do the job, so they draw straws. The Major loses, but tries to make a run for it with the cash in hand. In quick succession, the criminals double-cross and kill one another, with the bodies ending up dumped into railway wagons passing behind the house. Throughout all this, the oblivious Mrs Wilberforce remains asleep.

In the end, the gang members are all dead, and Mrs Wilberforce is left with the money. The police, familiar with her strange stories, pretend to believe her account of the robbery but jokingly tell her to keep the money. Ironically, Professor Marcus had earlier assured her that, because the money was insured, any effort on her part to return it would only confuse things. She is therefore finally persuaded that keep it she must.

The British comedian has a cameo role as an agitated market fruit seller, along with as a taxi driver. A young (Charlie Barlow from "") plays the driver of the lorry that gets robbed.

* - William Rose
*, British Film and Film from any Source

In 2000, readers of "" magazine voted "The Ladykillers" the 36th greatest comedy film of all time.

Mrs Wilberforce's house, No 57, was a set built at the western end of Frederica Street, directly above the southern portal of Copenhagen Tunnel on the railway line leading out of King's Cross station. However, the views "from" her house show Argyle Street, a couple of miles away, with the tower of St Pancras Station in the background.

Dana, Eurovision winner and former politician, was a toddler living at No 89 Frederica Street at the time.

A adaptation of the film was broadcast on on .

*imdb title|id=0048281|title=The Ladykillers
* [http://fp.martinunderwood.f9.co.uk/Ladykillers Then and now photographs of locations]